More Protection for Bridgeport Police and Community it Serves on Way with $100,000-Plus Acquisition

A recent City of Bridgeport budget fund revision that had $2.6 million to be allocated from Federal CARES Act monies saw a significant chunk go to the Bridgeport Police Department. Those dollars will not only benefit and protect the police, but the community it serves as well.
In June, the budget revision that was approved by Bridgeport City Council included $110,000 for the municipality’s police. And those dollars 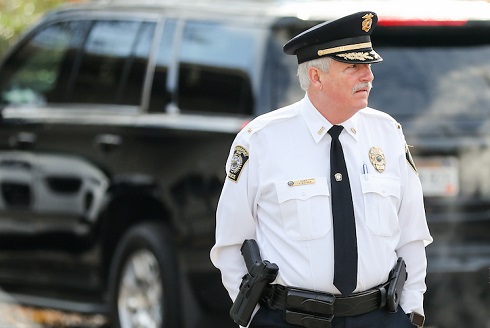 are not going to just anything standard.
Bridgeport will become the latest department in the state and nationally to have body cameras attached to its officers. The money will be used to acquire 40 cameras, a five-year maintenance contract and the software and storage capacity for them as well, said Police Chief John Walker.
“That will allow us to purchase cameras for every officer we have and a couple of spares where you may have an incident where one is broken,” said Walker. “This will allow us to keep everyone in service with a camera and pay for the storage of the data collected by those cameras as well.”
While Bridgeport typically likes to keep ahead of the technology curve, body cameras are not new. In fact, departments have been utilizing them on a much more frequent basis nationally for years. It provides legal protection for the officers and the suspect in any situation that merits investigation beyond anything normal.
“We’re aware we’re one of the latter departments to go this way, but there is a reason for it,” said Walker. “We have a pretty technical camera system set up in our vehicles that record most of the things we need.”
The key in Walker’s statement is “most.” It does not provide everything.

“When you’re out of sight of the car of the transmitter then you have an issue. This will eliminate that,” said Walker.
The good news, beyond the protection it provides for all involved as a video record, is the cameras do not eliminate, or make useless, the cameras inside the vehicle. Instead, Walker said they work in tandem with the cameras.
“This is a very expensive acquisition and we’re extremely pleased Council sees the necessity to have them,” said Walker.
As for when they go into place, Walker said it will likely be more than a month before their arrival. He said they have been in ordered, but like many items during COVID it will take longer than usual.