ToquiNotes: Asking Community to Help a BHS Couple whose Child is Battling a Rare Formation of Cancer

By Jeff Toquinto on August 06, 2022 from ToquiNotes

There is an old cliché about life throwing you curve balls. For anyone who has had any responsibility beyond getting good grades or cleaning your room, you know how well you can handle said curve ball is by knowing who is throwing it.
Former Bridgeport residents and Bridgeport High School graduates Jon and Jennifer Fox know a bit about a curve ball. The married couple, now living in Wilmington, North Carolina, were beating back most of the curve balls life typically throws at individuals.
In fact, they were both doing quite well and, for all intents, still are. Jon, a former soccer player for BHS and a 2000 graduate, and 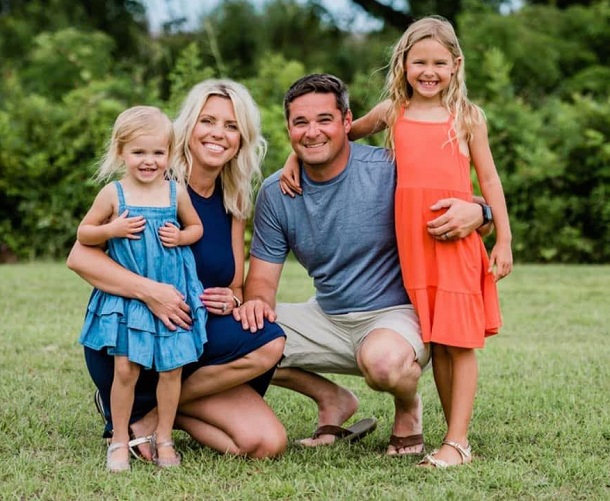 Jennifer, who cheered and played tennis before graduating in 2002, were married in 2013 and are only a few months away from their 10-year anniversary.
Ironically, despite going to school at roughly the same time and families going to church with one another, they never began dating until college, which made their union and subsequent family even more special. Their near 10-year journey saw a marriage in Bridgeport, followed by living a stint in Washington, Pa., followed by a move to Morgantown where their first child – daughter Madison, now 7, was born – there.
Then, they family moved to Bridgeport in 2018 and had their second child, daughter Parker, now 3. In January of this year, they were on the move again to Wilmington where they would eventually live two doors down from Jennifer Ashcraft Fox’s best friend who just happens to be her sister Deanna Ashcraft Beard, a 2005 BHS graduate.
Things were just about perfect. It seemed the Fox family had everything in order.
In many ways, they still do. The order, however, has changed thanks to a curve ball thrown by a foe in life they never saw coming in the 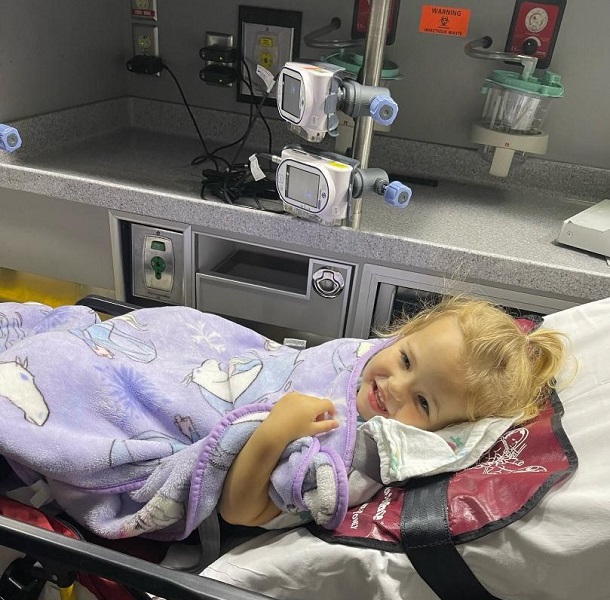 nastiest manner. Recently, the family’s littlest, Parker, went from having stomach aches and feeling well to being diagnosed with a form of cancer known as Rhabdomyosarcoma.
“We were just blindsided by it, honestly,” said Jennifer. “She was perfectly normal with her health and never imagined something was growing in her little belly.”
Unfortunately, something was growing. The first warning signs came in May, when the Fox family was in Canaan Valley to surprise Jennifer’s mother for her mom’s 60th birthday party.
“It was May 15, a Sunday. She was complaining of her belly hurting and had been a few weeks prior. She was a little bit reckless, but we thought it was just the fact she’s still a toddler or bowel or belly issues so many children go through at that age,” said Jennifer. “We didn’t think it was anything abnormal other than she wasn’t sleeping great because she was playing hard and doing everything most at three years of age do.”
The family returned to Wilmington that evening. On Monday, Parker still was not feeling well so instead of going to daycare she stayed 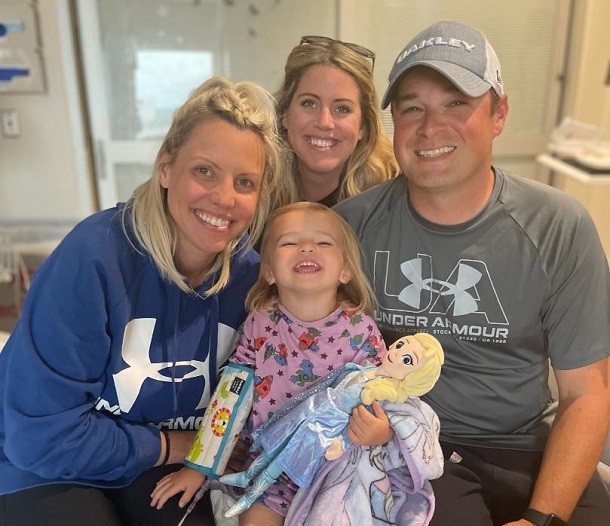 home. Tuesday, Parker went back to daycare with no real issues, but it was on Wednesday when the first serious alarm sounded.
“The daycare called and said she was sick and had thrown up twice. But they were more concerned because she was lethargic and couldn’t hold her self up,” said Jennifer. “I still went there thinking it was just a belly issue, but when I saw her, she didn’t look good. You could tell something was off.”
It was here where the move to Wilmington to be close to her sister paid off. Along with having a friend and family member a few doors down, her sister is also a pediatric nurse practitioner.
“I called my sister and brought Parker to my sister’s office because we have our provider there,” said Jennifer. “When I got there, she knew something wasn’t right. The initial thought was an obstruction with the bowels.”
A diagnosis could not be made, and Jennifer and her sister took Parker to the emergency room that was nearby. Eventually, an ultrasound was done, and the news was that it was likely one of two things – a distended bladder or a mass in her stomach.
In short order, Parker was transferred to Wilmington where a CT scan was done. The confirmation was that she had a mass in her belly. 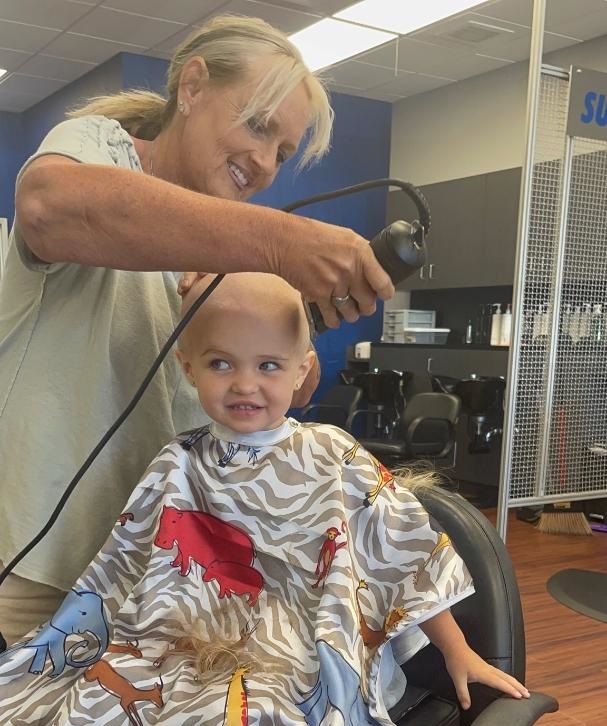 “The local hospital could do pediatric surgery, but they couldn’t confirm where the mass was originating from … they didn’t want to open her up and find out they were dealing with more than they could handle,” said Jennifer. “The decision was made to transfer her to the UNC-Chapel Hill Hospital.”
In Chapel Hill more scans were done to get clearer images. They confirmed the mass and decided on surgery. The surgery came May 23.
Starting at 4 p.m. and lasting for more than three hours, little Parker was in surgery. It was a success as the mass was removed.
“We got to see her in recovery and knew we would find out in a few days what was going on as everything was sent to pathology,” said Jennifer.
They diagnosis came in three days – the cancer Rhabdomyosarcoma, Stage 3, was revealed. While it is not uncommon, the area in Parker’s body where it formed is almost unheard of.
“There is one little girl in New York being treated for the exact same situation. Other than that, there are five known cases like this, all in Europe, in the last 20 years,” said Jennifer.
With a diagnosis in hand, and specialists who understood exactly what Parker was facing, the medical team wanted to start treatment quickly. And that has happened.
The treatment, already underway, would be tough for anyone. For a 3-year-old, even more of an issue.
The protocol is a 40-week session of chemotherapy and eventually three to six weeks of radiation every day of the week for five straight 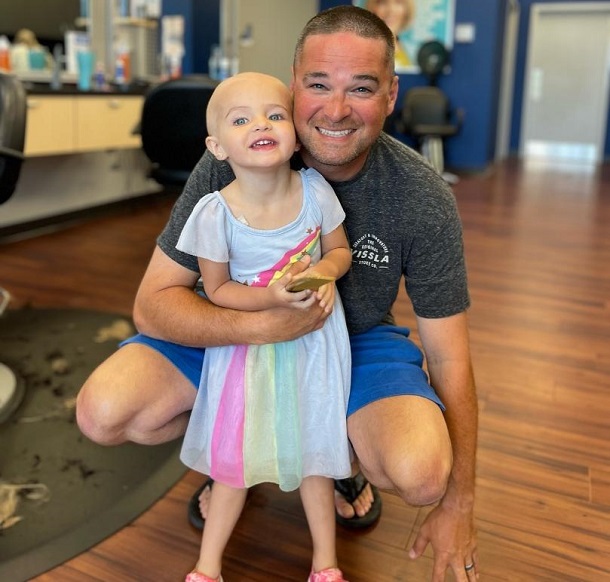 days. In September, the plan is for little Parker will have combined chemotherapy and radiation days.
“A lot with how things will proceed will come after August 15,” said Jennifer.

On that date, Parker will have a PET scan. The results will be followed by a collaboration with the oncologists, who will also talk to doctors of the other youngster in New York, to determine how aggressive the radiation needs to be.
Until then, the chemo will continue. As of Wednesday, Parker had already completed nine treatments. Already, this little beauty’s hair is gone.
“They estimated about 21 days after chemo began, she would lose her hair and after two weeks it began falling out,” said Jennifer.
It was at that point, on Father’s Day, Jon Fox decided he and Parker would both shave their heads, and she had a smile on her face at it came off.
“She’s lost all of her hair. What’s really unique is that other than her little bald head, you wouldn’t know that she’s sick,” said Jennifer. “She’s swimming every day and has great energy.”
There is one exception. Every third week, Parker undergoes an extended chemotherapy treatment and Jennifer said each time it takes a little time to bounce back.
“That may continue to be the case, but we’re thankful that she’s not been super sickly like we know she could be,” said Jennifer. “There is so much you don’t know so you have to hold on to hope for today and the future.” 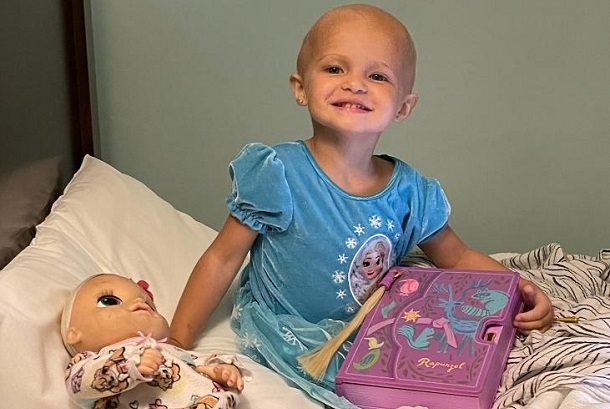 The initial hope is to get Parker into remission, but it’s too early in the process to know even though the odds are better for that to happen at her age. There is a possibility of a second surgery, but again, it’s too early. Until then, Jon and Jennifer Fox will rely on family, friends, and faith.
They know what that offers.
“We are very religious, and the path life has taken us to live next to my sister who is such a help and with these hospitals close by to help is no accident,” said Jennifer. “The medical staff have been taking amazing care of her.
“We know we’re in good hands and we’re past the hardest part, which was hearing the news,” she said. “We know what we’re up against and deal with those obstacles.”
The big hurdle for the family is travel every week to Chapel Hill; a six-hour round trip that sometimes includes a stay at the Ronald McDonald House. And sometimes those trips see little Parker get sick after treatment.
When radiation begins, Parker will be there every day. Jennifer said they hope the Ronald McDonald House can accommodate them.
“You push every thought of anything difficult aside knowing Parker is there every day for treatment,” said Jennifer. 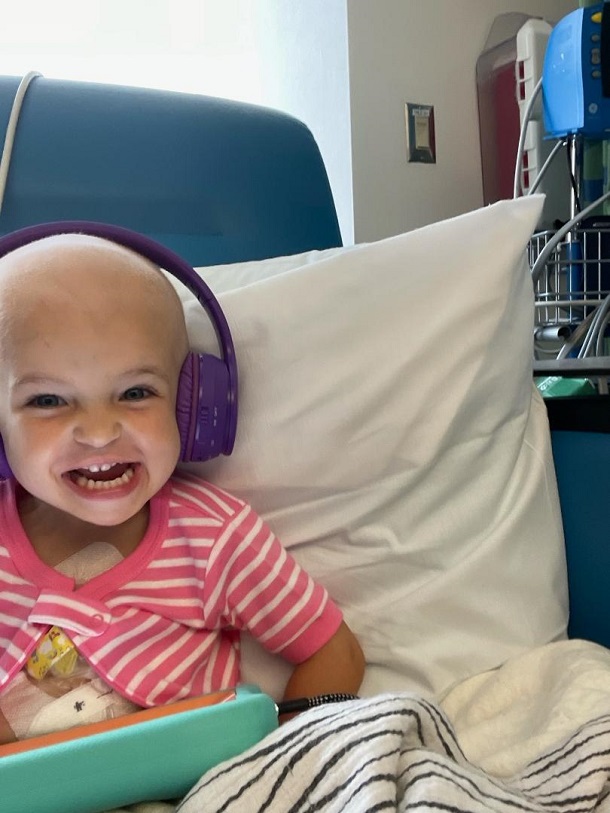 As noted, family and friends have been there every day. In the face of the worst situation their family has dealt with, they have found beauty from their social circle and beyond.
“The amount of people supporting us has been overwhelming here locally and back and Bridgeport, people we work with and people we don’t know,” she said. “We know we have people in at least 20 states praying for us, and people sending us cards, people bringing us food.
“I didn’t know people would care and want to follow her (Facebook page - click HERE to join) journey,” she continued. “The concern, the prayers and caring are amazing. They even send things to Madison. We’re appreciative of everything.”
She is particularly appreciative of one person – her sister Deanna.
“She’s been the most amazing person,” said Jennifer as her voice cracked with emotion thinking of the help Deanna has provided.
It should be noted, although Jennifer never asked, the family does need some help. The medical bills, the travel, the stays, and so many other costs add up and a GoFundMe page has been set up to assist.
This is where Bridgeport and those throughout the area can help. Click HERE and offer support to two from our community who could use a boost right now. Help out, and assist in knocking cancer's curve ball out of the park and out of Parker's and the Fox family's life.
Editor's Note: Top photo shows Parker, far left, with mom Jennifer, dad Jon and sister Madison, while Parker, Jon, and Jennifer are joined by Jennifer's sister Deanna Beard in the third photo. The second photo shows Parker starting her hospital journey, while she's shown getting her hair cut in the next photo and with her daddy, who also got a buzz, in the photo after that. In the bottom two photos, Parker is showing her energy is still good and cuteness still at full throttle despite ongoing chemotherapy treatments. All photos courtesy of Jennifer Fox and the Fox family.