By Connect-Bridgeport Staff on November 19, 2022 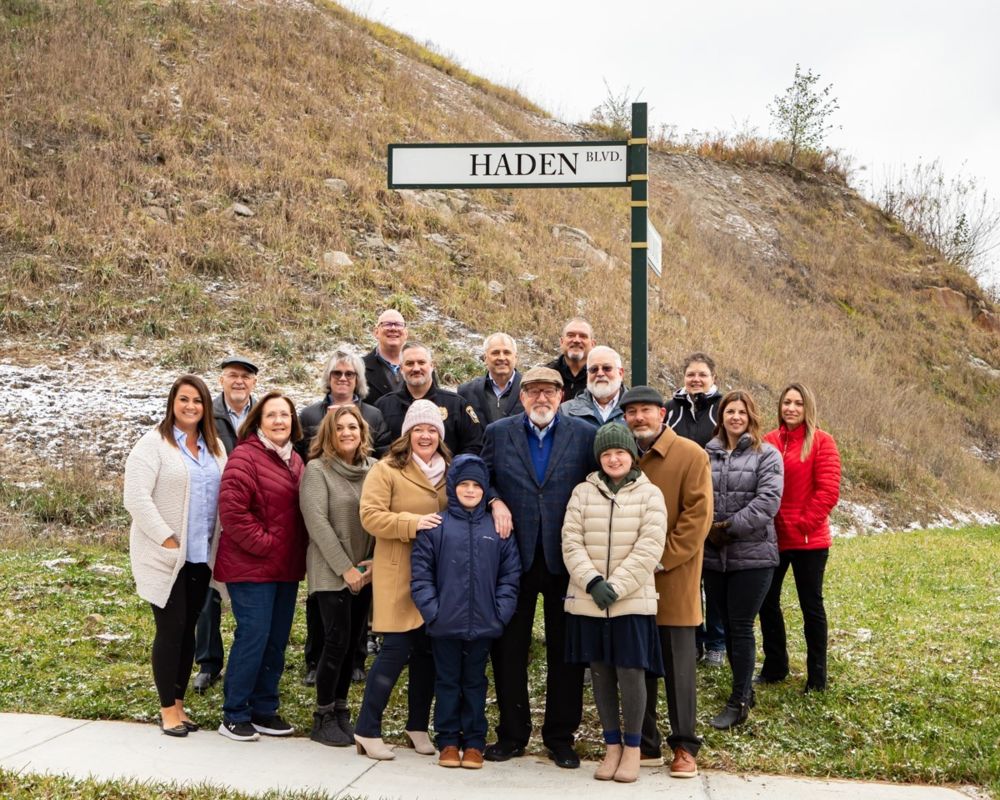 yards of rock and dirt. The cost to move the dirt, create the flat land, and to install all utilities, streets, and streetlights in phase one of Charles Pointe Crossing is in excess of $24 million.
Last month, national home improvement retailer Menards broke ground for a new super center at Charles Pointe Crossing that will include more than 240,000 square feet of retail space. Menards is a family-owned business headquartered in Wisconsin that owns and operates over 330 stores throughout 15 states. The super center at Charles Pointe will be Menards fourth store in West Virginia.
Genesis Partners indicates that several other nationally recognized retailers are currently negotiating for space at Charles Pointe Crossing. In addition, the new $22 million Mon-Health Harrison hospital will also be located at Charles Pointe Crossing.
On Thursday, Genesis Partners, along with City of Bridgeport and Harrison County officials, gathered to recognize the commitment and dedication of the planner and landscape architect who worked with Genesis on the original master plan and layout of Charles Pointe.
Jim Haden is a native of Morgantown, and is a 1971 graduate of West Virginia University where he earned a degree in landscape architecture. After several years as a principal with a prominent internationally known design firm, Jim and his partner founded Haden-Stanziale to focus on domestic clients throughout southeastern United States. The firm has been recognized nationally for their work with clients to ensure quality, to encourage creativity, and to maximize responsible stewardship of the land.
Haden has nearly four decades of professional experience in the design and creation of Master Planned communities like Charles Pointe.
“Throughout my entire career, I’ve had the opportunity to work on numerous projects both internationally and throughout the United States, but I’ve only had the opportunity to work on one in my home state of West Virginia, the one that I am most proud of, Charles Pointe," said Haden.
Haden is now happily retired and resides in Charlotte, North Carolina with his wife and family.
"When we started this journey to create a community that Bridgeport, Harrison County, and the state of West Virginia would be proud of, we knew that we had to have Jim Haden on board with us," said Jamie Corton of Genesis Partners.
"In the beginning, Jim helped guide us through every step of the way. He understood and shared our vision of building a community that would attract and retain talent here in North Central West Virginia," Corton continued. "Today, Charles Pointe offers the amenities that families, professionals, and senior citizens desire and want to live near."
Haden and his family returned to Charles Pointe to join Genesis Partners and local officials for the dedication of Haden Boulevard. Joining Corton and his team from Genesis Partners was Harrison County Commission President Susan Thomas, Bridgeport City Manager Brian Newton, City Engineer Beth Fox, Community & Economic Development Director Andrea Kerr, and Bridgeport Police Chief Mark Rogers.