Mr. Paul Murray Whiteman, 103 years of age of Lawman Avenue, Bridgeport, WV, died on Friday, April 12, 2013 at the Meadowview Manor, Bridgeport, WV. He was born July 4, 1909, the son of the late Jacob and Mary Murray Whiteman.
He is survived by his wife Ellenor Lawson Whiteman. They had celebrated eightythree years of marriage. Mr. Whiteman is also survived by a son, Richard Whiteman and his wife Susie of Bridgeport; a daughter, Sue Moninger and husband Duane of Santee, SC; three 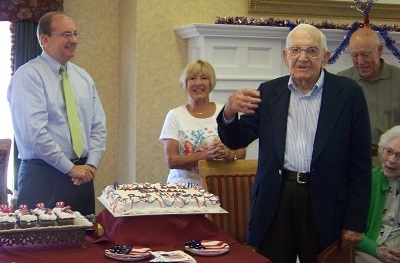 grandsons, Richard Paul Whiteman and wife Robbi of Bridgeport, Daniel Whiteman and his wife Diane of Bridgeport and Greg Moninger and his wife Nancy of Charlotte, NC ; great grandchildren, Matthew Whiteman, Tyler Whiteman, Shelby Whiteman, Courtney Newlon, Amy Cleghorn and Jeff Foster.
Mr. Whiteman was a 1927 graduate of Bridgeport Union High School and later graduated from West Virginia Business College. He was well known in the community as a custom home contractor. He was an active member of Bridgeport United Methodist Church. He previously served the church as a trustee, a Sunday school superintendent and a teacher for the junior high class. Recently, he was recognized by the church as trustee emeritus.
Memorial contributions may be made in Paul's memory to the Bridgeport United Methodist Church Permanent Fund, 251 Worthington Drive, Bridgeport, WV. Friends will be received at the Ford Funeral Home, 215 East Main Street, Bridgeport, WV on Monday from 2:00 PM - 4:00 PM and 6:00 PM - 8:00 and at the Bridgeport United Methodist Church, 251 Worthington Drive, Bridgeport, on Tuesday from 10:00 AM - 10:45 AM. The funeral service will be celebrated in the church on Tuesday, April 16, 2013 at 11:00 AM with Reverend Dr. Ken A. Ramsey presiding. The interment will follow in the Bridgeport Cemetery, Bridgeport, WV.
Condolences may be extended to the family at www.fordfuneralhomes.com. The Whiteman family has entrusted the care and arrangements to the Ford Funeral Home, 215 East Main Street Bridgeport.
Editor's Note: Photo shows Mr. Whiteman being recognized at his 103rd birthday.