Harrison County Schools in collaboration with Story Tapestries and the Kelly-Miller Community Center will provide families of elementary-aged students with the STEAM-Con event.
Participants will be exploring STEAM through movement, dance, rap, and poetry using a variety of books and materials.  Each night will feature a special STEAM-Con teaching artist that will provide engaging activities followed up with STEAM exploration.
Participants will even be provided a swag bag to enhance their experience!  Space is limited, and registration closes May 3.
More information is available HERE

Articles have been surfacing regarding the continuing changes made by the United States Postal Service and how these changes will affect delivery of the mail.   We as well as other utilities are already seeing delays which cause statements to be received later in the month than residents are accustomed to in the past.   By the same token, businesses are suffering delays in receiving payments.  These delays in payment receipt can result in a customer receiving penalties on their accounts. 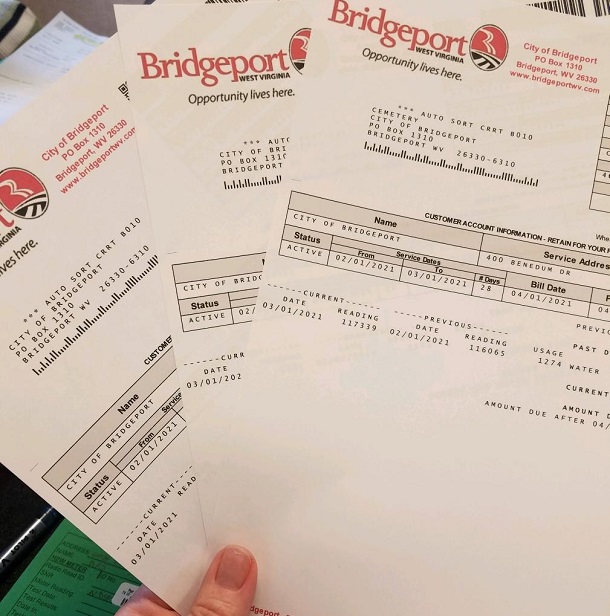 The City has been researching what can be done to help the residents with this situation.  A great majority of the delayed payments have been through the online bill pay service at the banks because more and more customers are using this service.  After speaking with a representative at the bank, this is not a banking issue.  These payments are not transmitted electronically to the City.  The bank issues the check payable to the City and the check is mailed through the postal service.  The bank processes the payments and allows five to seven days for delivery of the checks.  This time frame was sufficient in previous times.  However, with the changes made by the postal service this lead time is no longer adequate. If a customer chooses to use this service, the City requests that all payments be mailed with at least a 14-day lead time for processing and mail delivery.
The City has always watched postmarks on payments received.  Any payment postmarked the same day as the due date are considered on time.  The change in mail delivery has caused this process to become a multiday task, in some cases causing penalties to be posted as late as the 26th of the month.  Regarding the payments made through the bank, the City has been forced to watch the issue date on the checks to not penalize a customer for a mail delay.
The City offers an eBill option to alleviate the delay in statement receipt by the customer.  The eBill option can be accessed through the online bill pay service on the City’s website at www.bridgeportwv.com.  Customers can call the utility office at City Hall at 304-842-8224 and have their email address added to their utility account to receive an eBill.
The City offers multiple ways to pay bills without utilizing the postal service.  There are drop boxes located in the City Hall parking lot, at the left side of the Fire Department and in front of the Library.  Just drive up and put the payment in the box with out leaving your car.  There is a drop box beside the front entrance of City Hall.  There is a walk up drop box in the lobby of City Hall that can be accessed during regular business hours, no waiting in line.  Customers are always welcome to make payments in person at the utility office during normal business hours.  Payments are accepted in the form of cash, check, money order, credit/debit card in person or via telephone (fees apply) or online (fees apply).
If you have any questions regarding how to set up eBill or making payments, please contact the utility office at 304-842-8220 during normal business hours, 7:30am – 4:00pm Monday – Friday.

More than 30 Sections of City to Possibly Face Water Woes, including No Service, Between April 19-30

Residents may experience some discoloration, cloudy water, low pressure, or temporary loss of service of water during this period. The City will not be responsible for any damage caused by discolored water. Call (304) 842-8231 for more information.

Ballot Order Draw for Bridgeport June Election Proves Uneventful, but One Candidate No Longer in Field

The field, and ballot order, is set for the City of Bridgeport’s 2021 municipal election. The election will take place June 8.
While the process of choosing the order of how the candidates running for three Council seats is fairly simple, there was a surprise. There were only four candidates who had their names drawn this morning as opposed to five that officially filed for office. 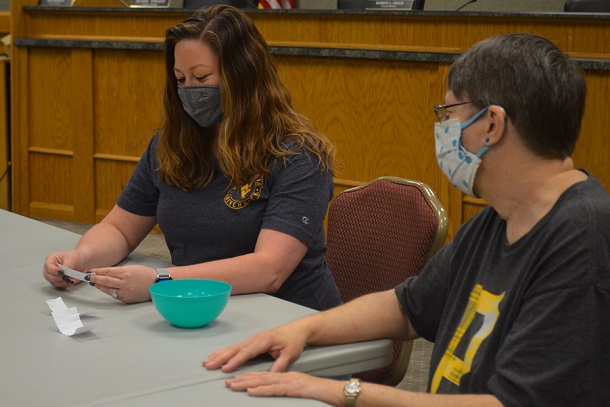 According to City Clerk Donna Krivosky, who oversaw today’s event, Wendy Backus is no longer one of the candidates. Krivosky said Backus lived in an area outside of the city limits and could not run for a seat on the city’s governing body.
That left ballot commissioners Carole Kinard and Stacey Randolph to draw names from a bowl to determine the position of the four remaining candidates. Listed number one on the ballot will be Jonathan Griffith followed by Jason Campbell, John S. Wilson, Sr., and Barry Balon.
There was no drawing for the position of mayor that is also up 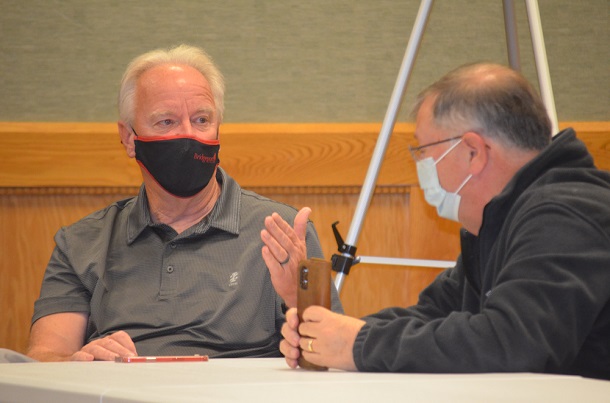 for another four-year term on the ballot. Incumbent Mayor Andy Lang is running unopposed.
There will be at least two new members on the next Council. Current members Dustin Vincent and Robert “Bob” Greer opted not to seek another term.
Absentee voting applications may be requested through June 2 of 2021. All candidate packages, absentee applications, and any other information required or questions concerning the election are to be directed to City Clerk Donna Krivosky.
Krivosky can be reached at 304-842-8235. She can also be reached via email at donna@bridgeportwv.com.
Editor's Note: Top photo shows Ballot Commissioners Stacey Randolph, left, and Carole Kinard pulling names, while City Council members Don Burton, left, and Dr. Hank Murray, are shown below. Four Council members were required to be on hand for the drawing.