The City Parks of Clarksburg has announced Multi Award Winning Country Artist Travis Tritt is set to perform at the Clarksburg Amphitheater on Saturday, July 30th, 2022.
Music has carried Travis Tritt on a lot of amazing adventures. From helping reunite the legendary Eagles to being mentored by such icons as 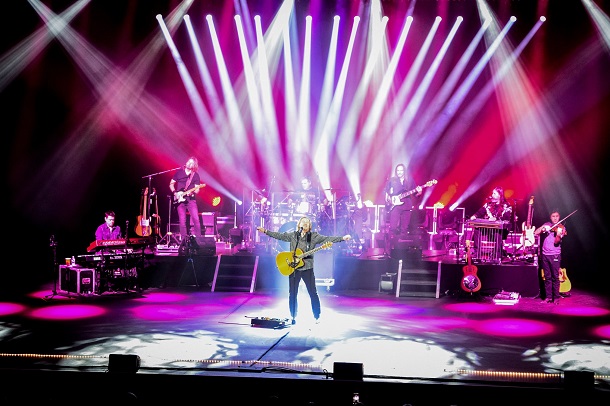 Waylon Jennings, Kenny Rogers, and Charlie Daniels to becoming a member of the Grand Ole Opry, music has opened many doors that the talented Georgia native has boldly walked through and left his own indelible mark. And the adventure is far from over.
With the release of Set in Stone, Tritt embarks on the next chapter of his stellar career armed with the distinctive voice, insightful songwriting, and outlaw edge that have served him well for more than three decades.
“When we told people, I was getting ready to go back in and record the first studio album I’d done in 13 years, they said, ‘Well, what kind of album is it going to be?’ The only answer I could come up with is, ‘It’s going to be a Travis Tritt album,’ and a Travis Tritt album to me represents everything I’ve ever done,” says Tritt, who co-wrote eight of the album’s 11 tracks. “I’ve always tried to take all of the influences that I have which are across all different genres. I love straight-ahead country. I love the old stuff, the great storytelling songs, songs that make you feel something with the lyrics that they are relatable. There’s the Southern rock influence that I’ve always tried to showcase in every album, the blues influence that I’ve had all my life, the old Southern gospel stuff, bluegrass, all of those different things.”
On Set in Stone, the Grammy winner has delivered the quintessential Travis Tritt album. Opening with the rowdy “Stand Your Ground” and mixing potent love songs like “Leave This World” with searing country rockers like the first single “Ghost Town Nation,” Set in Stone pays homage to all sides of Tritt’s musical personality.
Such versatility and creative passion have always been the hallmarks of Tritt’s artistry. A member of country music’s much-celebrated Class of ’89 that also includes Clint Black, Garth Brooks and Alan Jackson, Tritt populated country radio with such hits as “Here’s a Quarter (Call Someone Who Cares),” “I’m Gonna Be Somebody,” “Help Me Hold On,” “Put Some Drive in Your Country,” “Can I Trust You with My Heart” and “It’s a Great Day to be Alive.”
Tritt has won two Grammy Awards, four CMA Awards, and a Billboard Music Award for Top New Artist. Seven of Tritt’s albums have been certified platinum or higher, earning him more than 30 million in career album sales. He’s scored five number one singles and 20 Top 10 hits. He’s also expanded his creative resume’ into acting with film and TV roles in Rio Diablo (1993), The Cowboy Way (1994), Tales from the Crypt (1995), Sgt. Bilko (1996), Fire Down Below (1997), Outlaw Justice (1999), Touched By An Angel (1999), Blues Brothers (2000), Yes, Dear (2004), Brother’s Keeper (2013), Forever My Girl (2018), and more. Produced by Dave Cobb, well known for his work with Chris Stapleton, Jason Isbell, the Oak Ridge Boys, and Brandi Carlile, Set in Stone is a well-crafted collection that spotlights Tritt’s gift as a storyteller.
“It was just a great experience all the way around,” Tritt says of working with Cobb, after his manager introduced the two. “Dave understood me and knew my music inside and out. He knew the kind of stuff that I was attracted to, the kind of stuff that I wanted to do and he was just very easy to work with in the studio as well."
Tickets for the event will go on sale at 10am on Friday, April 22 , 2022. Advance tickets will be available by visiting www.ClarksburgAMP.com or by calling 866.973.9610.
Advance tickets will be $45 for general admission, $55 for reserved seating and $60 for premium seating, which will include the first 7 rows from the stage. Day-of-Show tickets will increase $5 for each section and will be available at the venue unless they sell out prior to the event. For more information and future announcements about upcoming events, be sure to visit www.ClarksburgAMP.com or call 304.624.1655.