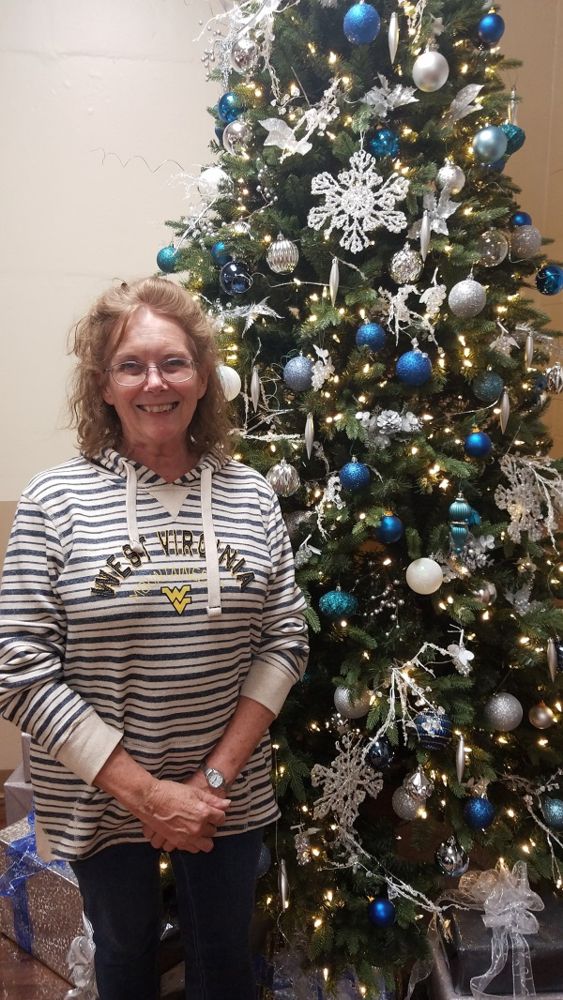 This week's City Face and longtime Bridgeport resident Kathie Smallridge made the suggestion many years ago that Bidgeport's swim team be named the Wildcatters, in honor of Michael Benedum. Now she works at the building, built to replicate the Bridgeport benefactor's childhood home.
1. How long have you lived in Bridgeport? My family moved from Charleston WV, to Bridgeport in 1962.
2. Tell me about your family. My husband Rod and I have been married for 45 years and we have four sons Scott, Justin, Joshua and Jared. Rod and I and all of my boys graduated from Bridgeport High School. We have one grandson, David. David is in 7th grade at Bridgeport Middle School.
3. Do you own pets? We have a 12-year-old Maltese named Lacie.
4. Where do you work and what do you do there? In 2017 , I retired from the federal government, after 20 years of service and I also retired from the YMCA, where I was an aerobic instructor for 27 years. Two days after I retired, Rod was diagnosed with stage four non-Hodgkins lymphoma. The chemo treatments were successful and he is in remission. In February of this year, I was hired as a receptionist for the Parks and Recreation department at the Benedum Civic Center.
5. What do you like to do in your spare time? My hobbies include exercising, making cards and attending WVU basketball games.
6. What is your favorite spot in our city?  I have so many spots in Bridgeport that I love that it is hard to choose just one. I love the walking trails, Almost Heaven Desserts, the pool and the Benedum Civic Center..
7. What do you love about Bridgeport? Bridgeport was recently ranked the 16th "Best City in America" and if you live here you know why. The people in Bridgeport are friendly, supportive and caring. The small town atmosphere is alive in Bridgeport. My mother laughs when we are out together because she insists she can't go anywhere with me that I don't run into someone that I know and that is one of the reasons I love Bridgeport.
8. Tell me about some of your most memorable times here in Bridgeport? My memories of Bridgeport could fill a book, but I would have to say my favorite memories are of summer and the Fireman's Fair. The parade, the princesses, the rides and games. The entire community would go down behind the firehouse for an evening of family fun. The fair lasted a week and was the high point of summer.
9.What about your favorite spot outside of Bridgeport? My favorite spot outside of Bridgeport would have to be the WVU Coliseum in Morgantown, sitting in our seats watching the men's basketball team. I have wanted to storm the court with the students, but Rod holds me back. Maybe this year I can do it.
10. Outside of West Virginia? My favorite spot outside of WV is Ogunquit, Maine. Ogunquit is a beautiful coastal town we discovered while visiting our youngest son Jared and his wife, Erika, who live in Portland, ME.
11. Rod and I love to dance to music from the 60's. I have been lucky enough to attend concerts to see, Elvis,  Neil Diamond, the Beach Boys, Paul Revere and the Raiders and others.
12.  What are some of your best memories from your childhood? My best childhood memories are when we lived on Faris Ave. In the summer, my sisters, Beckie, Jennie and I (Margaret was a baby and couldn't join us) would go outside and join the other neighborhood kids and catch lightening bugs, play hide and seek, have parades with our wagons and bikes and have dance parties on the "carports". It was the kind of childhood they make movies about.
13.  What else would you like to add? A few little interesting notes:  My father, Jerry Webb, was a member of the Jaycees. As a member, he had to choose a project for community service, so what does the father of four girls do for a project?  He started the Pop Warner football league in Bridgeport. At that time there was one team for boys ages 10 to 12  and they were the  Bridgeport Wildcats. He also coached the Bridgeport swim team for a few years (because all of his girls swam). He was instrumental in getting team suits, (until then you swam in whatever suit you owned). He had the first "starting blocks" built by Hinkle Construction. Until he began coaching,  the team was called Bridgeport swim team, he asked the team members to come up with a name. I suggested the name Wildcatters in honor of Michael Benedum and that is how the team received its name.
14.a We are heading into my favorite holiday season, Christmas. I put up 14 Christmas trees in the house:13 artificial and one live tree.
I love decorating for Christmas. Rod insists that is why I wanted to work for the City of Bridgeport , so I could decorate the city trees too!