By Connect-Bridgeport Staff on April 12, 2020 from City Faces

Meet this week's City Face, Stephen Pishner:
How long have you lived in Bridgeport?
I live in Clarksburg but have been coming Bridgeport for years.
I think the farthest back I can remember would be going to All Saints for Mass as a young boy and then also riding in the car as we  took my older sister Diana to All Saints School.

If not a lifelong resident, tell me what brought you here?
All Saints Parish has always been my strongest connection to Bridgeport.

Are you married, have kids?
I am married to Belinda Elam Pishner who is employed at Edward Jones in Home Depot Plaza.
We have one daughter, Grazia, who is nine years old.

Tell me about your family.  My parents were Louis and Ann Allessio Pishner. They are both deceased They gave more than 100 percent as parents to raise my  sisters Diana , Annie and me. I am the middle kid.  Music is a common household commodity in our home. My wife, Belinda, sings and can play the guitar. She sings at All Saints and is in the choir.  Our daughter, Grazia, also loves to sing in the house and knows many songs via radio and Youtube. She loves to dance as well and is playing a little violin and ukulele . She does some artwork  and one of her pictures became an album cover for one of my recordings. Maybe one day she will hit the stage, for now though, it will be just house performances.

What about pets?  We grew up with pets, but we have no pets. Our schedules are so crazy, a pet would probably complain and go on strike in our house.

Where do you work and what do you do there?   I work at All Saints Catholic Church in Bridgeport and have been there numerous years. I came on as a part time there in 1984 and later became full time in 1990. The position is called Director of Music and Liturgy.  I also do music in a group called Amici, which began in 1984. Over the years, I have done some recordings and now have re-entered into that realm have done three very different recordings. “Amici in America” (an Italian folk/pop recording), “Songs of Grace for the Soul” (music for prayer), and “Songs of Love” (a Sinatra-ish kind of recording). Some of these recordings can be found on itunes, Amazon Music, iHeart Radio, Youtube, Pandora, Spotify and more.

What are your hobbies/favorite past times?  I love to read about foreign places, occasionally watch foreign films, read books and listen to talks on spirituality, scripture and theology, travel, and my newest thing to do  is running and working out. 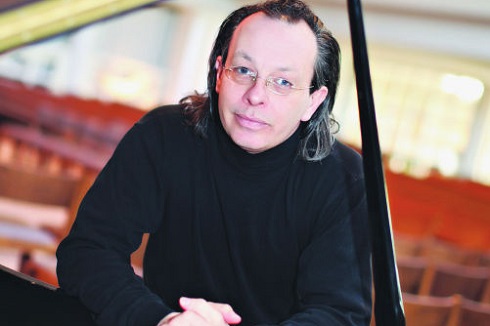 What do you like about Bridgeport?
The schools have acquired several accolades. The people I encounter in the parish who are residents of Bridgeport have always treated me with respect and are friendly.

One – or more – of your favorite memories of something that took place in Bridgeport . I have strong memories of going to Hills Department Store and Grants Department Stores on a regular basis. The parking lot was packed and it was an exciting  place to be. You name it:  the popcorn smell as you walked in, coke icees being made all day, it seemed, and yes, the toy department with match box cars, bicycles and my all time favorite, - keys. I loved to collect uncut keys there. I drove my parents crazy.  I  also loved  going to watch the planes take off at the airport. My family would go to eat upstairs in the Benedum Airport, once in a while, on a Sunday,  just so I could see the take-offs and landings, in hope of one day riding in a plane.

What is your favorite WV spot outside of Bridgeport? Olgebay in Wheeling.

How about your favorite place outside of WV?
It’s a toss-up between Rome and the beach area of Isola Capo Rizzuto in Calabria (Southern Italy)

What are some of your favorite things? A good concert, an art show, meeting people from other places, and laughing hard while listening to comedians.

Food/restaurant?  Italian Food… I like to support the local Italian restaurants. My wife is a great cook too! I eat a vegan diet and feel great.

What are your best childhood memores? Going to church with my parents, piano and organ lessons, as well as being with all my Italian grandparents on Sundays, Sunday meals and the early years of the Italian Festival. A strong memory that comes to mind often these days - is just the fact that the days of summer (as a child)  seemed like a long time and the world seemed to not be as harsh and polarized as it is today.

Interesting fact about you and/or something you would like to add… I speak Italian, some Spanish, a smattering of French and would love to go back to school one day (probably online) and study any or all of the following: more music,  languages, scripture, biblical history, theology or just how to relax your brain LOL.
In December, Pishner released his album, "Quiet My Soul," on a variety of digital musical platforms, including Apple Music/iTunes, Spotify, CDbaby.com and YouTube, among others. Read the feature about his music HERE.
Listen to some of Pishner's latest-released singles; "You Raise Me Up," HERE, "Psalm 22" HERE and "This is the Day" below.