By Connect-Bridgeport Staff on October 07, 2019 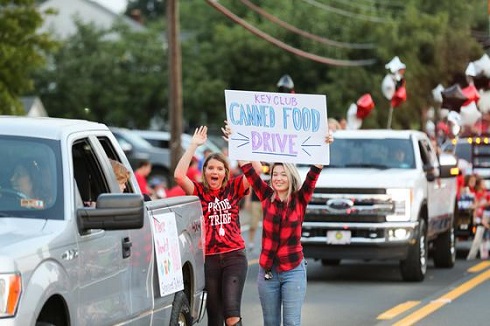 Amid the lively festivities of decorated floats, marching bands, and flag twirlers, the Bridgeport High School Key Club will lineup in the homecoming procession to collect canned goods from parade onlookers. This service opportunity has a unique beginning and significance to both Key Club advisor Mrs. Cathy Cox and many club participants.
For Bridgeport High School Junior and Key Club President, Clayton Hammond, the food drive has been a rewarding experience in the past. The canned food collection was initiated by a Bridgeport student a fewyears ago and was originally called the Little Red Wagon. Cox fondly reflected, “[Key Club volunteers] actually pulled children’s little red wagons down the street and set the food in that. Fortunately, it grew from there and the little red wagons weren’t big enough.” This year, Key Clubbers will be walking alongside a pick-up truck in hopes of accumulating a large supply of food to benefit Shepherd’s Corner.
From an early age, Cox found her passion in fighting local hunger. Cox commented, “Hunger contributes to so many other negative things.” As a teenager, she worked at Shepherd’s Corner and experienced the positive impact of the shelter on the community. Cox continued, “If we fight the hunger, then we fight the crime from people stealing to feed their hunger and for apathy and fatigue in the schools with kids who are hungry and not able to focus on their school work.” Cox believes that this service not only affects the food recipients, but also the students and community members involved because “they can see that they are helping.” She explained, “Anytime you are helping, it’s not only going to make you feel good, but it also impacts you as a person.” Cox’s enthusiasm for the project quickly spread throughout the club.
The canned food drive is not the only Key Club project represented in the parade. Cox emphasized, “This goes hand in hand with ‘Boxing It Up to Give Thanks’ in November.” Walking the route will also be supporters of this Key Club campaign, one sought to bring boxed meals and the opportunity to create fond Thanksgiving memories for local families. Boxing It Up to Give Thanks has grown to include Bridgeport, Notre Dame, Robert C. Byrd, and Lewis County High Schools – uniting students in service to feed community members across multiple counties. With a goal of $25,000 to provide over 1000 boxed Thanksgiving meals, the program needs local support. Cox asserted, “It is all about feeding the hungry and taking care of those basic needs that we all have.”