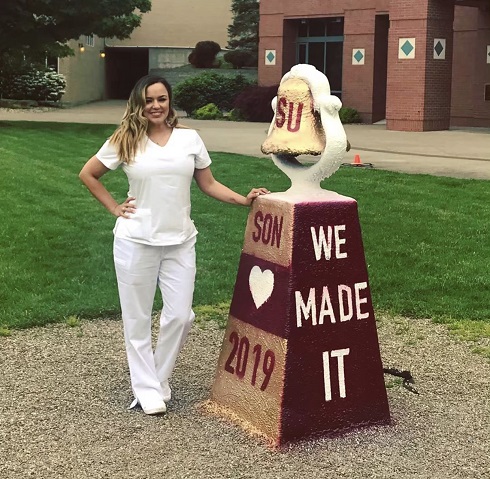 Iris Canfield’s story is both tragic and beautiful, a perfect example of a phoenix rising out the ashes.  Born to two addicts, her father’s dying words inspired her to pursue a career that would honor those who struggle.  She was only eight years old when her father died from HIV/AIDS that he contracted from intravenous drug use, separated from her brother and adopted by her grandmother.
“My father’s dying wish was that I would go into nursing,” said Canfield.  “For years, I pursued other careers out of stubbornness, owning my own graphic design business, bartending and working for a local attorney.  A series of events led me back to my father’s words and to the pinning ceremony in May at Fairmont State University.”
Canfield’s uncle passed away suddenly from a heart attack, followed almost immediately by her grandmother’s fall in the same house.  After her grandmother was discharged, she moved in with Canfield’s family and, for the first time, Canfield realized her calling to help people on a more regular basis.
Her friend, local DJ Lacy Neff, fell ill and received a heart transplant, solidifying the career to which she was being called.
“I literally woke up one night and said, ‘OK, dad, you were right.  I need to be a nurse,” she said.
She shut down her graphic design business and started researching United Hospital Center, although she had never been there and didn’t know anyone who worked there.
“I knew that was where I was meant to go,” she said.
While searching UHC’s website, Canfield literally applied for the first opening she saw, a housekeeping position.  She knew if she could get her foot in the door, she could work her way into other positions and learn more about the hospital.
“It was humbling going from a graphic designer to a housekeeper,” she said.  “But I knew it was what I needed to do.”
During this time, she also applied to the nursing program at Fairmont State University and was accepted. It would be another year before her classes started, so she persuaded the cardiology manager to allow her to take the telemetry class so she could fill in for telemetry techs when needed. After working in housekeeping for one month, she passed the test and soon applied for a registration position at 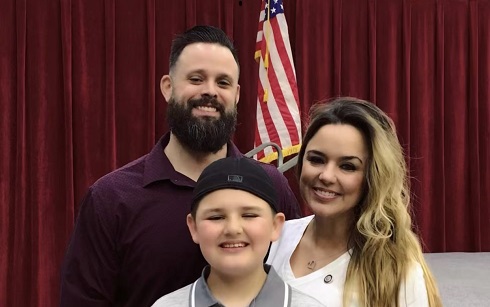 UHC.
“The registration position was such a blessing,” she said.  “I learned a lot and met wonderful people and had the opportunity to work in the cancer center and emergency, giving me more insight on other areas of the hospital.”
Right before beginning the nursing program, she moved to Bridgeport.  Her perseverance and hunger for learning proved invaluable as she finally began taking classes for the profession to which she was called.
Because her parents were addicts and she and her brother were separated and raised in different families, she has spent much of her adult life advocating for other children in the system.  She volunteers for CASA in Marion County as a court-appointed special advocate for children taken from their homes.  Her call to service went beyond the health field to the entire community and volunteering allowed her to give back while she took classes.
During rotations, she felt a definite pull toward cardiac nursing, specifically in the Progressive Care Unit which provides extra attention between critical care and cardiac rehabilitation.  She faced some challenges as she attended nursing school, including financial concerns, relocating her family, and navigating relationships.  Right before graduating from the FSU nursing program, her brother passed away.
“It was very difficult to be happy and proud of myself for the pinning ceremony while grieving the loss of my brother,” she said.  “It was my son who motivated me to work so hard and to attend the ceremony and I knew that my father and brother would be proud of me as well.”
Both her father and brother died at the same age and both left her with a legacy to take care of those with addiction issues and health concerns.  Now that she is a nurse, she hopes to volunteer her services for those less fortunate locally and around the world.  She also hopes to help during natural disasters and show her son how rewarding it is to help others.
“This journey has provided so many blessings for our family,” said Canfield.  “It has shown me that with hard work, faith, perseverance and encouragement from loved ones, I can do anything and be anything and I am so thankful to finally be a nurse.”