It's Happening: Remembering Jerry Pence Jr. and His Ability to Find Joy in the Day-to-Day

By Julie Perine on September 19, 2021 from It’s Happening 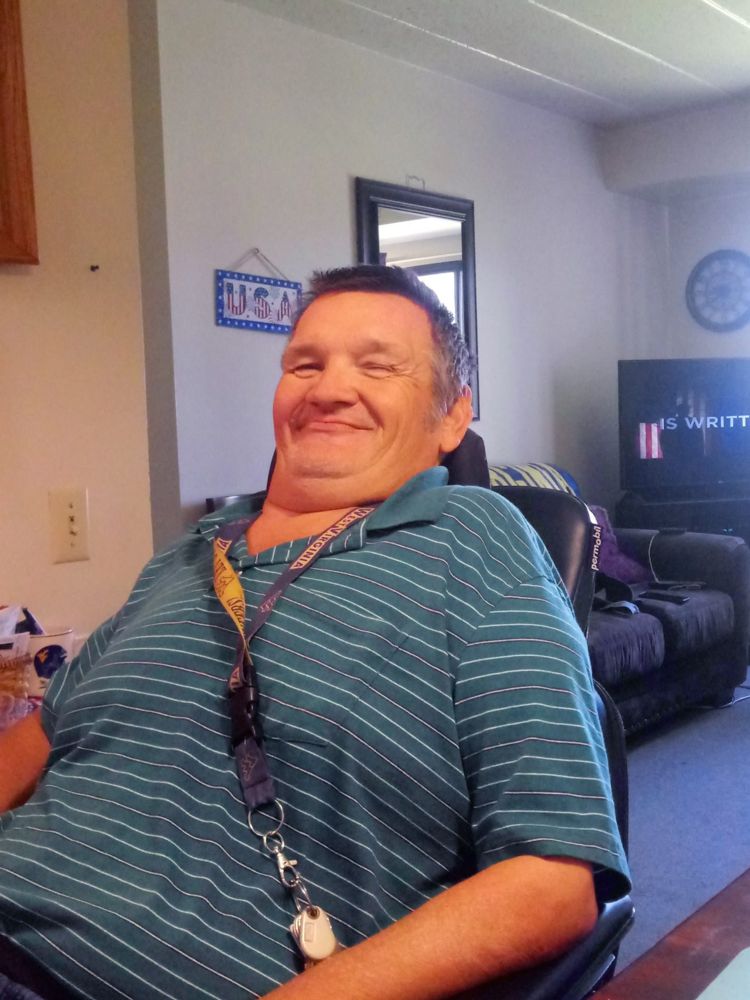 You may or may not recognize his name, but you’ve likely seen him around town.
His trademarks were a motorized wheelchair and a pleasant disposition.
On Sept. 6, Jerry Pence Jr., a resident of Bridgeport Manor, passed away after a lifelong battle with cerebral palsy.
“Jerry would be seen multiple times throughout the day on Main Street in Bridgeport,” said Brad Ford, owner of Ford Funeral Home. “…He focused on his abilities rather than his disability and had a smile for everyone.”
Tina White was a friend and fellow Manor resident.
“Jerry was the first real friend I met when I moved into the Bridgeport Manor. He greeted me and we had long talks and pizza parties – and power chair races in the parking lot,” she said. “…Never, ever did Jerry complain about being stuck in that chair. He accepted it and it never stopped him from going anywhere he desired to be.”
Tina feels blessed to have known such a sweet, ornery, fun man for the past four years.
“I will always hold him in my heart and remember him with love and that hand of cards dealt him in life,” she said. “Most importantly, the way he played that hand.”
Among Jerry’s favorite Main Street hangouts were Almost Heaven Coffee & Desserts/Expressions Hair Salon. It was there where he met property owner 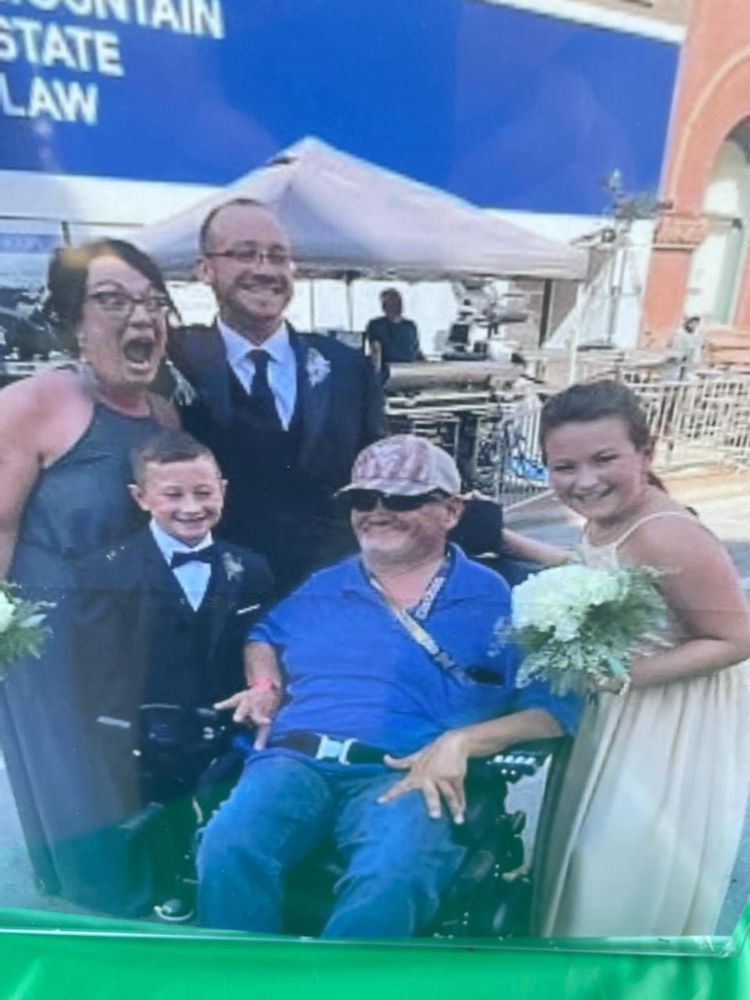 Mark Bonamico.
“I feel pretty blessed, honored and privileged to know Jerry for the past seven or eight years,” Mark said. “I first set out to help him make his life better and in retrospect, I believe the Lord turned that on its head and he made my life so much better. He helped me to become a much better version of myself.”
Mark said Jerry helped him to understand that life comes with certain pains and disappointments, yet we should never give into them, but always find joy in the day-to-day.
“He exemplified joy at every moment. I’m certain he was in a great deal of pain. I would leave him feeling as if I could never complain about my aches or pains, knowing what that young man was going through. He inspired me in so many ways.”
Jerry even gave Mark opportunity to teach his grandchildren about compassion and to understand that just because someone has a handicap, it does not change the fact that they are good human beings.
“They loved him dearly and were upset to hear of his passing,” Mark said.
The Bonamico family was among many who gathered at The Bridge Sports Complex on Saturday, Sept. 11, to pay tribute to Jerry’s life. The service included a release of green balloons to signify the color of cerebral palsy awareness.
Jerry’s sister Lenore Heinzman believes he would have been pleased with the observance. She was four years old when her little brother was born with cerebral palsy.
“He never said ‘why me?’ He’s been happy-go-lucky his whole life,” Lenore said. “He didn’t care that he couldn’t walk, but that’s because our parents raised him to think he could do anything that anyone else did.” 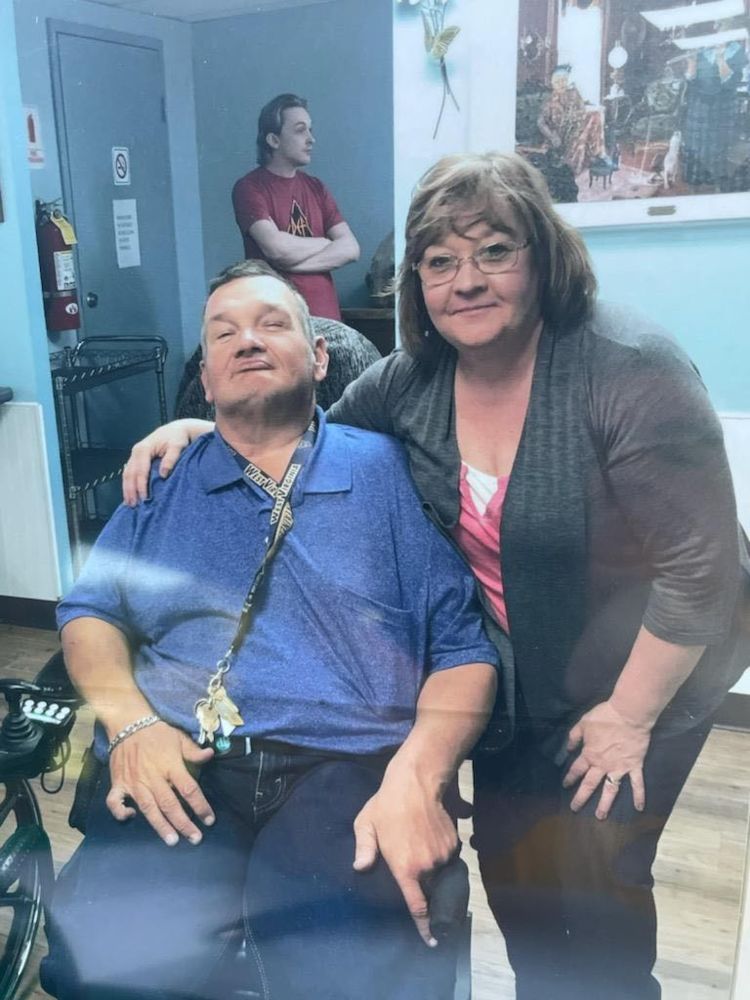 Visits to zoos and amusement parks, as well as other family outings were frequent during the Pence children’s upbringings.
“We traveled everywhere, and he went and experienced life,” Lenore said. “It made him very independent.”
Originally from Missouri, the family lived in Flemington and later in Clarksburg. When their dad worked in Pittsburgh, he would sometimes take Jerry with him.
“He taught Jerry to ride the city bus and he would travel around Pittsburgh, then meet Dad back at work at the end of the day,” Lenore said.
The family endured much hardship, but they carried on as needed.
“They lost their house while dad was fighting cancer, then moved into an apartment in Bridgeport,” said Lenore, adding that her mom lived with diabetes and high blood pressure.
Jerry lived with his parents until they passed in 2006 – first mom Lavonia of a stroke, then Jerry Sr. of colon cancer. Lenore then asked her brother to move into her home, but she lived in a rural area and Jerry really wanted to be in town where he could ride the bus.
“He really wanted to live in a regular apartment, but couldn’t afford it,” Lenore said. “He was a little disappointed when he moved into the Manor, but he was happy that he could still be independent.”
Though Lenore assisted him with grocery orders and other big tasks, Jerry was pretty much on his own, including shopping at Meadowbrook Mall and, of course, his Main Street visits.
Jerry had to relocate to a nursing home in July of 2020 because 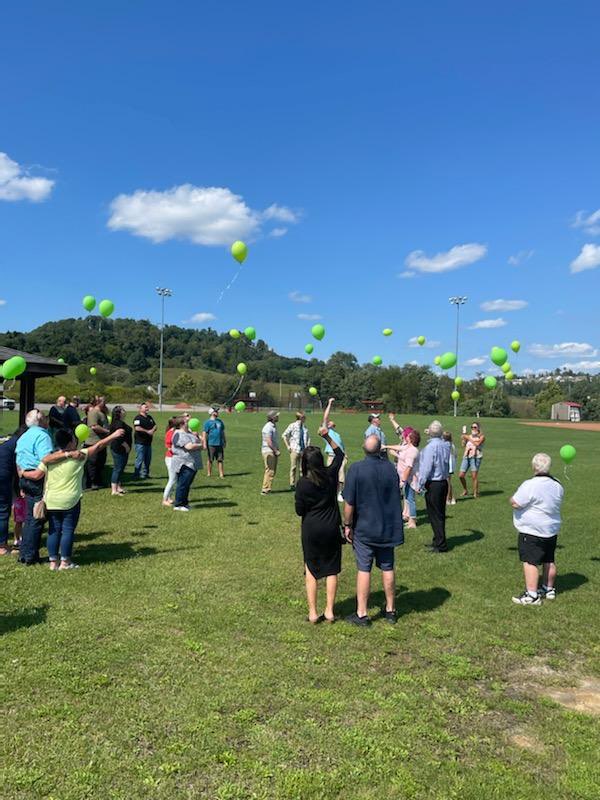 his condition had become so debilitating.  First, he was in Morgantown, but he wanted to be closer to his Bridgeport home. He was then moved to Stonerise Clarksburg/River Oaks.
Jerry was a lifelong WVU and NASCAR fan. He had vast knowledge about many things, including cars.
“He would see a vehicle and know the year and what kind of motor it had,” Mark said.
Mark is thankful for his many memories of Jerry, including his 50th birthday party at Bridgeport Manor and sponsoring him into the Catholic Church.
“I was able to walk that journey with him,” he said.
This past Sunday, scripture read at mass brought Jerry to his mind.
Mark, Chapter 8, verse 34: “…Whoever wants to be my disciple must deny themselves and take up their cross and follow me.”
“I feel that’s what Jerry did and how he lived his life,” Mark said. “He never acknowledged his disability as a disability. He used it to bring joy, comfort, and life to all those around him. And I feel very blessed and honored to be able to be able to take part in that. I’m going to miss him.”