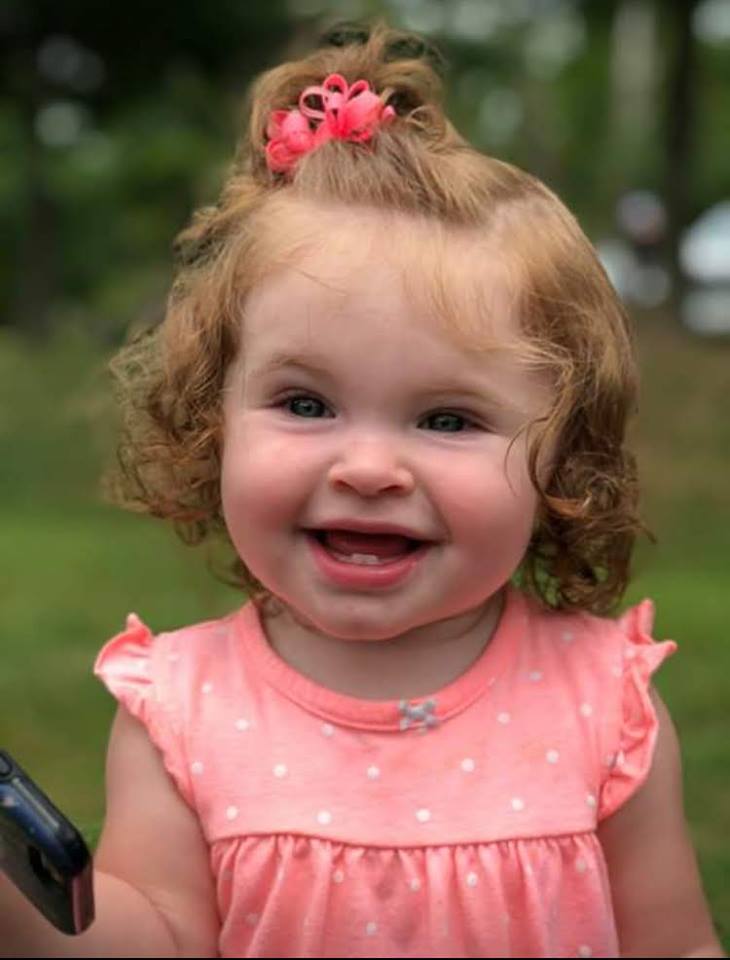 Madilynn Shaffer is red-haired, blue-eyed toddler described by her parents Stacy Wescott and TJ Shaffer as a little spitfire. She loves her pets – two dogs and five cats – and delights in playing hide-and-seek with them. She enjoys being outside, playing in the water and eating pasta.
At the beginning of the year, Madilynn was a healthy 16-month-old little girl, but almost nonstop since Jan. 29, she has laid in a hospital bed. After being seen by medical professionals at four hospitals, she was ultimately diagnosed with the autoimmune disorder ADEM and a rare condition known as anti-myelin oligodendrocyte glycoprotein or “anti-MOG.”
“It basically means Madilynn’s immune system is attacking the white matter of her brain,” Wescott said.
Her current treatment at Children’s Hospital of Philadelphia is intravenous immunoglobin (IVIG) infusion therapy, which basically cleanses her blood, ridding it of antibodies.
“She has two catheters in her neck, one which drains blood out through a machine, taking out the bad antibodies that are attacking her brain and the other which puts blood back in, adding new antibodies from a donor,” Wescott said.
Not only can she not walk, talk or even sit up on her own, Madilynn is often in pain and has encountered road blocks in her treatment, including kidney stones, pneumatosis and several broken bones due to high doses of steroids which physicians believes made her bones extremely brittle.
“She has so many different issues going on right now; fractures in her spine, broken right wrist, tibia, left foot and sternum,” Wescott said.
Madilynn is at Children’s Hospital of Philadelphia. Her mom has been with her around the clock, but her dad is working seven days per week in his new position as property manager at 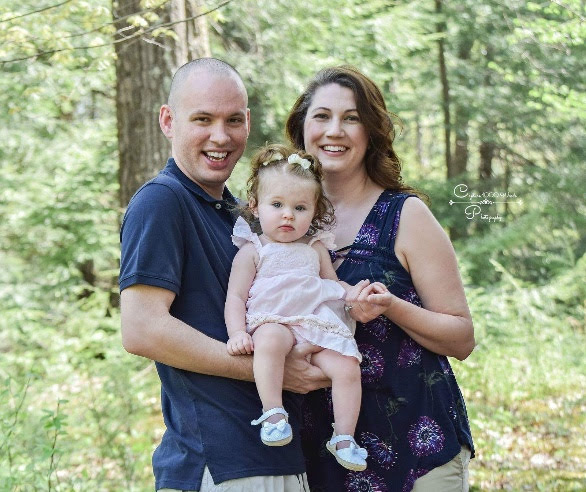 Meadowbrook Mall. He looks forward to joining his girls Easter weekend. Since Madilynn has been sick, he has spent much time reading and doing research. Earlier in her battle, he stumbled upon anti-MOG in an internet search. It matched her symptoms. At the time, Madilynn was at Ruby Memorial Hospital. After her parents were adamant about it, Madilynn was tested for the condition, which rarely strikes a little child.
“We had a different neurologist and she said it can’t hurt anything to test her for it. She approved the test and it takes like five days to get results back. By that time, we were at Nationwide in Columbus and found out she was anti-MOG positive," Wescott said. “It’s treatable to a certain extent, but we don’t know what version of Madilynn we’re getting back,” she said. “You can become paralyzed or lose vision.” 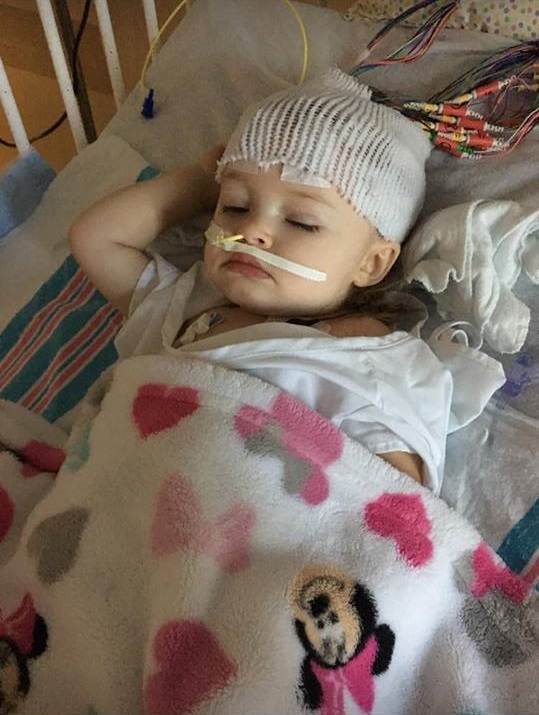 Madilynn’s health journey started Monday, Jan. 28 when she became congested and Wescott took her to her doctor.
“They checked her lungs to make sure they were clear and she was fine,” Wescott said. “She and I slept in the recliner that night, so she could sleep a little better - being upright.”
The next morning, Madilynn was slouched forward, making no sound and staring straight ahead.
“She wasn’t moving, so I put her in her car seat and took her to United Hospital Center. They transferred her to Ruby Memorial and said they thought she had a seizure,” Wescott said.
The test for seizures, however, came back negative.
Again, Madilynn was sent home.
“By Thursday, she was acting like herself, but on Friday, she just wanted to lay around and cuddle,” Wescott said. “I just thought she was getting over everything, so I didn’t think much of it.”
By Saturday morning, she was screaming in pain and didn’t want to stand.
“I told TJ something was really wrong and that we needed to take her to the ER,” Wescott said.
They took her back to Ruby, where more tests, including a chest x-ray, were performed. She spent three weeks in pediatric intensive care before going on to Columbus for five weeks and ultimately Philadelphia.
Wescott and Shaffer are holding onto hope. Madilynn is being treated by Dr. Brenda Banwell, one of the top physicians in the field. They have followed the story of another little girl who suffered from the same disease. She did have sight loss and paralyses, but she is now doing well. 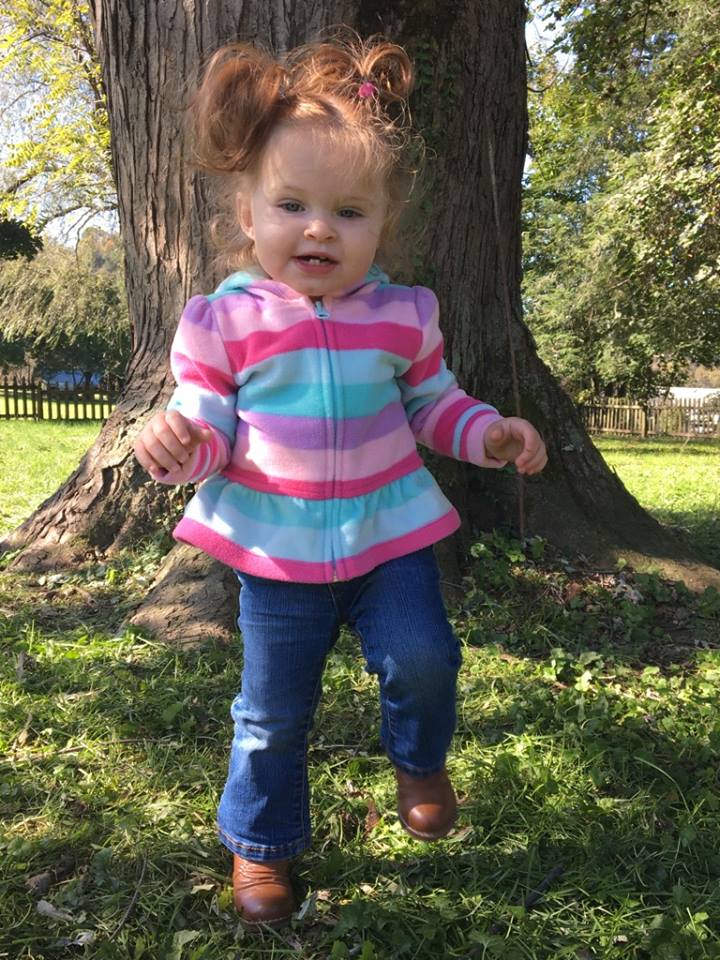 “She’s now a 7-year-old and is living a fairly normal life,” Wescott said.
Madilynn faces extensive treatment. Having formerly undergone plasma pheresis, she is now taking Rituximab, a medication used to treat certain autoimmune diseases.
Eventually, she will require extensive rehabilitation.
“Even when she is better, we’ll probably have to come back to Philadelphia for treatment once a month,” Wescott said. “She’ll also probably be immunosuppressant,so a sickness could trigger a relapse. I’m going to want to put her in a bubble.”
It is not known how many rounds of IVIG Madilynn will require. It could be dozens.
“We’re just taking it one day at a time,” Wescott said.
She is being fed through a tube and doesn’t have coordination to put her hand to her mouth.
“We have a long road ahead of us. I don’t know if we’ll need to modify the house – if she will have to have a walker or a wheelchair,” Wescott said.
But Wescott and Shaffer, who struggled with infertility for years before their August 2017 miracle, say they are blessed beyond measure to have Madilynn in their lives and hearts. They look ahead to better days and try to stay positive around their little girl.
They talk about her clearing out the kitchen cabinets and hiding her cat George inside, helping her mom bake in the kitchen or working on the computer with her daddy in his office. When she wears her pink brace, they call her a pink Ninja Turtle. They’ve gotten through hard times before, they said. They will do it again.
“We know our little spitfire can beat this,” Wescott said.
Wescott is originally from Michigan. She is a stay-at-home mommy. Shaffer was raised in the Bridgeport/Clarksburg area and is a 2004 graduate of Bridgeport High School.
A Go Fund Me page has been set up for Madilynn. The goal for “Saving Madilynn” is $100,000. You can donate HERE.