Army Veteran, Founder of Church in Harrison County, Rev. O.D. Harman, Passes Away at the Age of 93

By Connect-Bridgeport Staff on November 19, 2019

Rev. O.D. Harman, 93, of Clarksburg, went to be with the Lord on Saturday, November 16, 2019, at the WV Veterans Nursing Facility. He was born October 15, 1926, in Ellamore, West Virginia, son of the late Jay and Mabel Squires Harman.
Rev. Harman’s conversion took place at Cutright Chapel United Brethren in Christ when he was 11 years old. He graduated from Buckhannon- Upshur High School, Class of 1945. He attended Glenville State College for two years and served his country in the U.S. Army from 1945-1947.
He received his call from God to be a minister at the age of 15. His first assignment was at Tanner, West Virginia, where he was pastor over five churches for five years. He then completed conference and his seminary course and was licensed in August 1951 at the Huntington 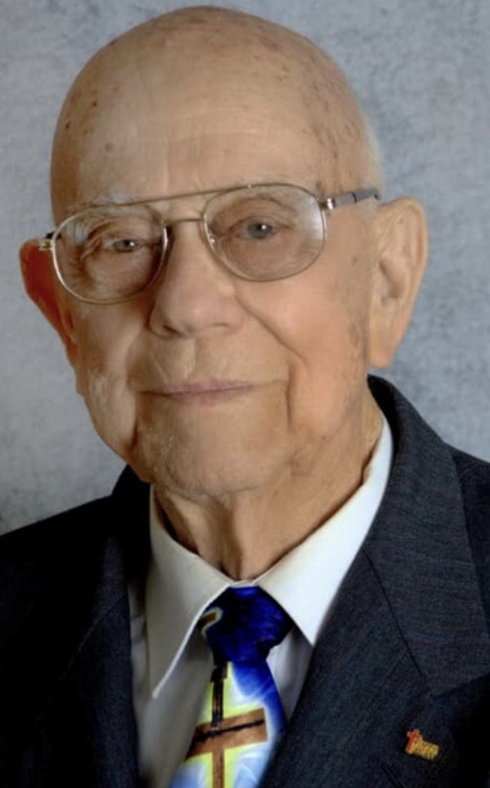 Evangelical United Brethren Church, and became an Ordained Elder in 1955. His second assignment was at Rivesville, West Virginia, from 1956-1961. He then came to Clarksburg, where he was at pastor at South Chestnut E.U.B. Church from 1961-1967. He left the E.U.B. Conference to fulfill his dream.
Rev. O.D. Harman had a dream of building a new church with a new congregation and was determined to fulfill this vision with God’s help. The land was purchased and every detail stood out in his mind to perfection until the new church building became a reality at Oak Mound, West Virginia. Rev. O.D. was at Evangelical Congregational Church for over 22 years until he retired.
With a short retirement, he then preached at Harrisville, West Virginia, from 1992-2002, then at Two Lick and Sardis until he fully retired in 2012.
Over the years, many have attended worship and enjoyed the results of one man’s dream. Many precious souls were won to Christ during this godly man’s ministry. Rev. O.D. devoted his life to the Lord, his community and his family. He will be deeply missed by so many.
His hobbies were hunting and fishing with his sons and grandsons, and going camping in Alton, West Virginia, close to where he was raised as a child. He was also a charter member of the Harrison County EMS.
He is survived by one son, Roger Harman and wife Margaret, Little Rock Camp; nine grandchildren, Chris Harman and Anita, Clarksburg, Scott Harman and Marla, Salem, Julie Finster Anglin and Zack, Lost Creek, Bryan Harman and Stacey, and Stephanie Harman-Storms, both of Clarksburg, Jason Harman and Dawn, Grafton, A.J. Harman and Shayna, Beau Harman and Courtney, Haven Harman, Jasmine Snider and Gideon Harman, all of Clarksburg, and Tori Holt of Preston County; 22 great-grandchildren, Alyssa, Alyvia, Gage, Toni, Cody, Emalee, Easton, Tanner, Ty, Logan, Kylee, Braden, Brice, Ayla, Adalee, Ryker, Thayer and Marek, Brody, Waylon, Jennings and Aspen; three great-great-grandchildren, Samson, Cora and Bryar; daughter-in-law, Marilyn Harman, Clarksburg; two brothers, Delmer Harman and wife Virginia, Warren, Ohio, and Dorrell “D.G.” Harman and wife Lavern, Clarksburg; one sister, Joy Amos and husband Don, Clarksburg; and several nieces and nephews.
In addition to his parents, O.D. was preceded in death by his wife, Betty Lou Lockhart Harman, on May 7, 2004; one son, Randy Harman; one brother, Duren Harman and wife Wilma; one sister-in-law, Jeanne Harman; and one grandson-in-law, Brian Finster.
Family will receive friends at Davis Funeral Home, 124 Olen Thomas Dr., Clarksburg, on Tuesday, November, 19, 2019, from 12 noon until 8 p.m. and on Wednesday, November 20, 2019, at Oak Mound Evangelical Church from 9 a.m. until time of service at 11 a.m., with Pastor Steve Delay officiating with Pastor Sam Evans and Pastor Bryant Bailey assisting. Interment will follow at Heavner Cemetery.
Online condolences may be sent to DavisFuneralHomeWV.com. In lieu of flowers, memorial donations can be made to Oak Mound Evangelical Church, 401 Oak Mound Drive, Clarksburg, WV 26301. Davis Funeral Home is honored to assist the Harman family.