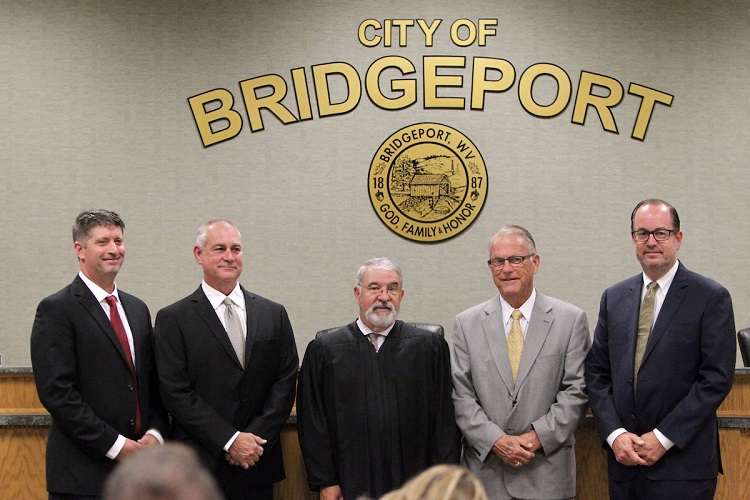 While a couple of key departures were announced at Monday’s City Council meeting — City Manager Randy Wetmore and Finance Director Monica Musgrave will be retiring in 2022 — it was also officially time for a couple of debuts.
Jon Griffith and Jason Campbell were both sworn in as councilmen and were on the dais for their first meeting. Mayor Andy Lang (serving his second stint) and Councilman John Wilson (serving a fourth straight stint) were also sworn in as well by Judge Thomas Bedell.
The four won their seats during the June 8 election.
But council meetings are nothing new for Lang and Wilson. For Griffith and Campbell — two familiar faces around Bridgeport — it marked a new beginning in municipal government. 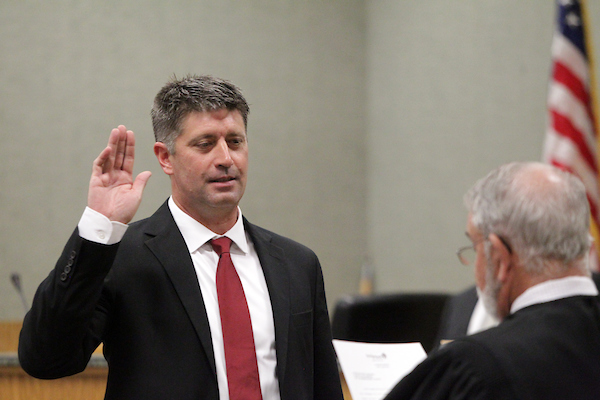 “The folks that came out and supported me and voted for me, I appreciate it,” Campbell said. “I was a little nervous the first time being up here but I will say that the orientation I went through that Randy set up for each department, it blew me away with the number of people that this city has and how dedicated they are and what they work with to make our city great.
“We all say our city is great and it is a great city. But to see the guts behind it was kind of fascinating. I’m glad to be here, glad to be part of the leadership team with the city and looking forward to the next four years.”
Campbell is president of JCFilms Presents and has shot nearly a dozen Christian films in the city limits with Dean Cain in the starring role.
Griffith was a successful educator and coach at Bridgeport High School for decades. He was widely considered one of the state’s most eminent track coaches and at the most recent state track and field championship meet served as the top track official. 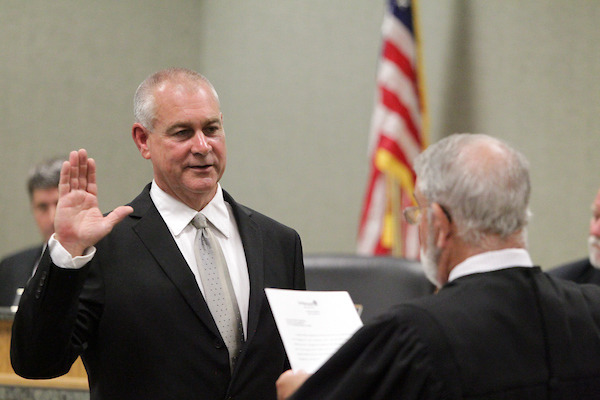 “I’d like to thank everyone who came tonight to see us get sworn in, Griffith said. For all the people in Bridgeport who supported me and came out to vote for me, I appreciate your trust in me and I’m honored to come to this council and represent you, so if you need anything please contact me.
“Bridgeport is my adopted hometown. I still feel the need to give back to the community.”
Campbell and Griffith were both part of the unanimous voting for every item of business on the agenda for Monday’s meeting.
One piece of unfinished business was the second and final reading of an ordinance that will establish a new speed limit on Center Court.
Three items regarding The Bridge — a contract for the design build of a new outdoor turf, a contract for the lighting of that turf and a change order for an additional parking lot — were passed by Council as was pursing a contract with GovHR for an executive search for the replacements for Wetmore and Musgrave.
Campbell and Griffith even got to take part in their first roll call vote which was needed for a coal severance tax budget revision.
Editor's Note: Top photo is of the four city officials sworn in on Monday. From left: Campbell, Griffith, Bedell, Wilson and Lang. Middle photo is of Campbell with Bedell and bottom photo is of Griffith with Bedell. Photos courtesy of www.benqueenphotography.com
http://www.benqueenphotography.com