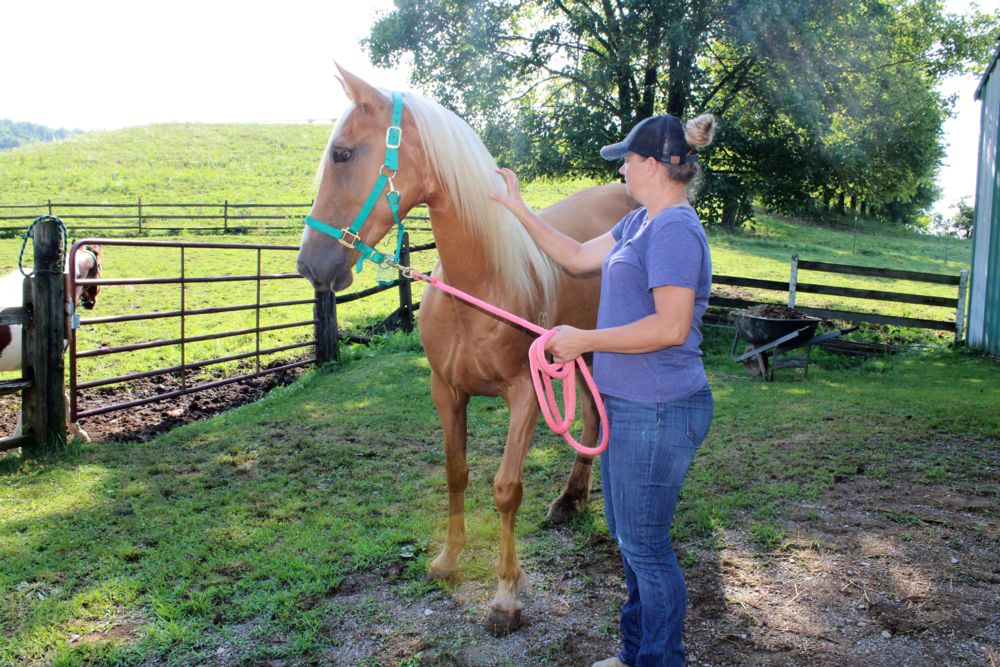 She picked him up in Lafayette and calls him Macaroni. 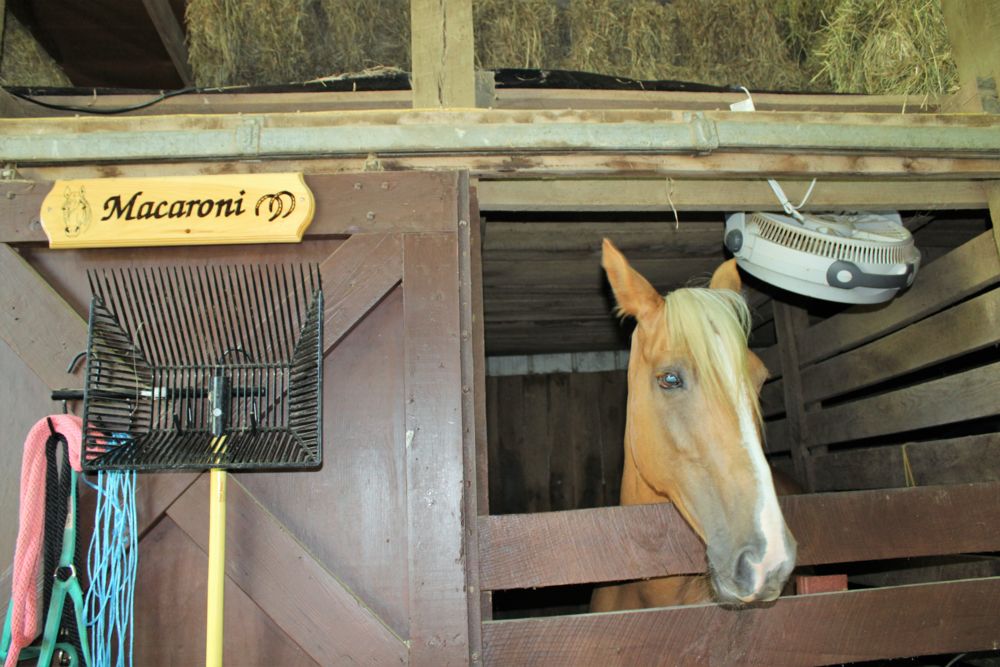 Since her May 25 trip to Indiana, Sylvia Richards has been the proud owner of a rescue horse she adopted through Heart of Phoenix.
“Heart of Phoenix is an organization based in Lesage, West Virginia,” Richards said. “They work with local law enforcement, taking horses that are severely neglected.”
According to the organization’s Web site, Heart of Phoenix saves as many neglected horses as possible through rehabbing adoptable horses and finding them the right homes.
“The adoption process is very, very strict,” 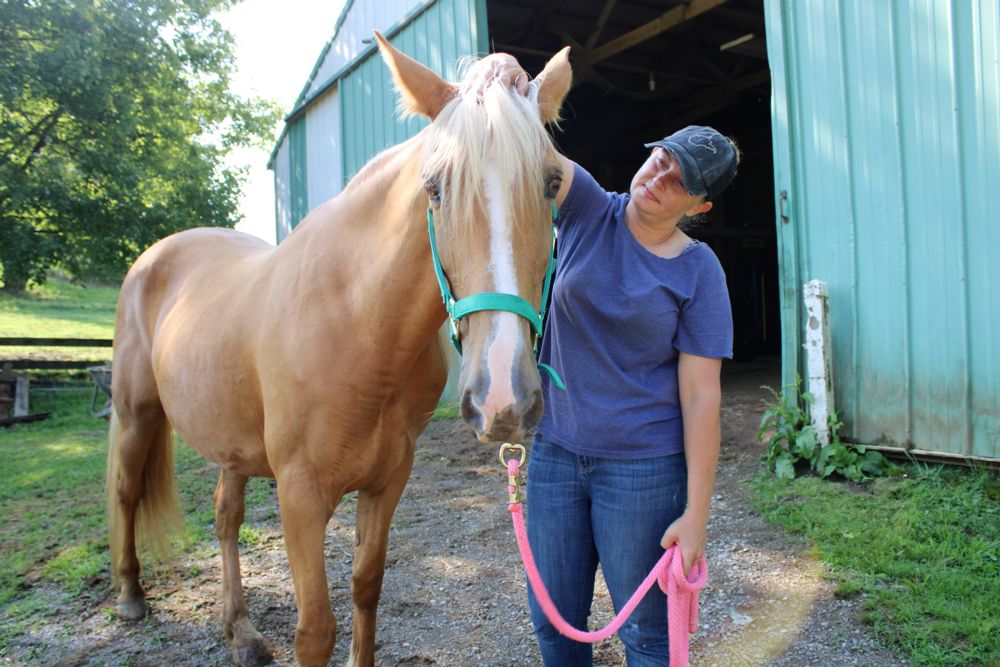 Richards said. “They call references and check with farriers and veterinarians. Photos of property must be submitted, along with any horses you already have. It’s a strict process due to the fact that these horses have already lived a bad life. They want to make sure the right horse is placed with the right owner.”
Richards, who already owned two horses - Rusty and Paint -  knew Macaroni was the right horse for her from the first time she saw her.
“There was just something about her. My husband and I fell in love with her – her whole composition,” Richards said. “She was absolutely 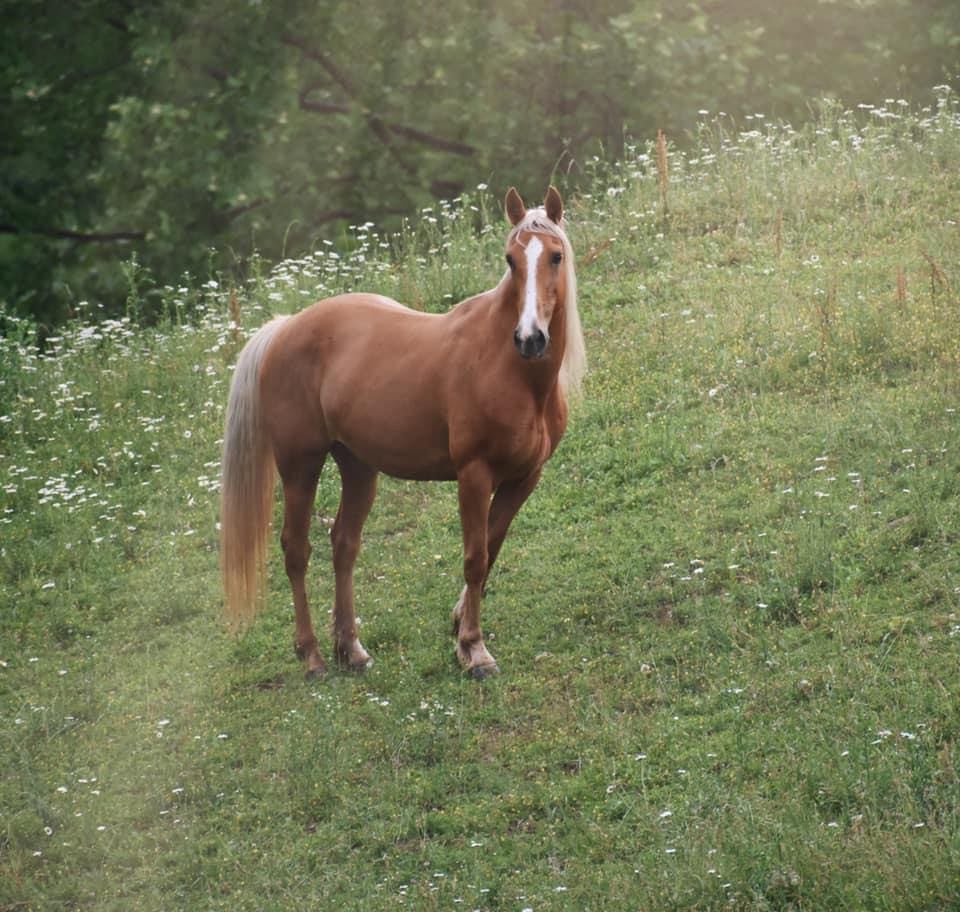 stunning.”
Macaroni was among horses seized in Virginia and had already been rehabbed and trained when Richards first saw her in pictures and videos posted by Heart of Phoenix and Horse Racing Nation Web sites.
“They showcase the horses and adopt them out that way. You can bid on them, but you have to be Heart of Phoenix approved,” Richards said. ““Macaroni had never been fostered, but I saw her (online) in a trainer faceoff last year.”
But Macaroni didn’t end up competing. She was pulled when it appeared she became ill.
Richards kept track of Macaroni, who went on to be fostered by a woman in Illinois. She eventually bought her after a year-long, thorough adoption process.
Richards met Macaroni in Lafayette, Indiana, after the horse had already traveled several hours from Illinois.
The horse certainly met Richards’ expectations.
“She’s really quirky. She’s sassy but also respectable at the same time,” she said.
Upon arriving at Deegan Lake Stables, where Richards keeps her horses, Macaroni was quarantined with the other horses so they could get to know each other before being released together. 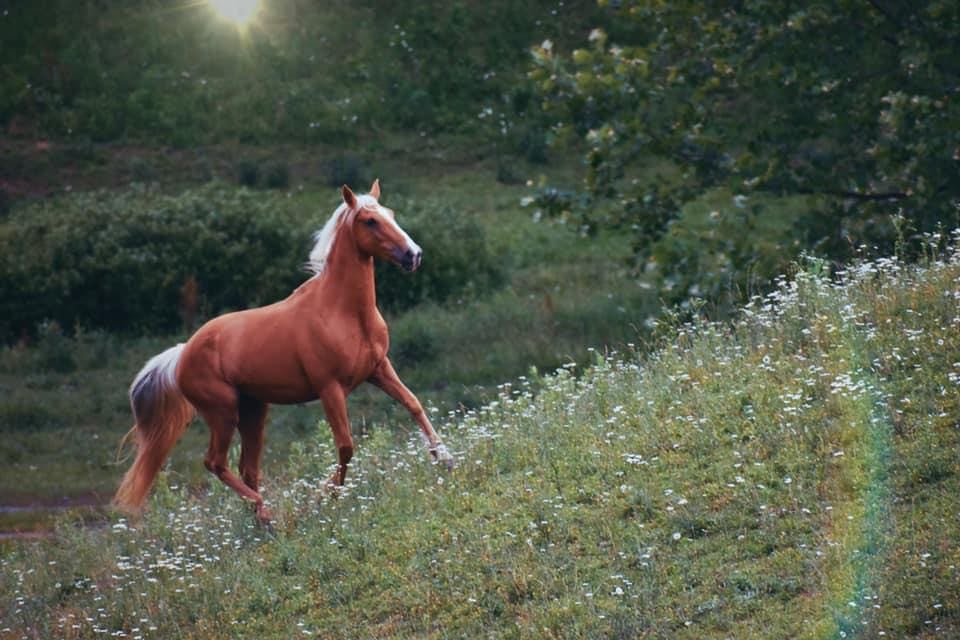 The very first time they all ran together, there was a rainstorm.
Richards and Anne Bartlett, who owns the stables, went for a ride on the four-wheeler to check on Macaroni.
It was just about then that the sun started shining.
“We found her sitting at the bottom of the rainbow. It was absolutely gorgeous. I felt like I had done the right thing by taking her,” Richards said.
From experience, Richards knows it will take a while to gain Macaroni’s complete trust.
In 2018, she purchased Paint - sight unseen. He had received poor care in the past 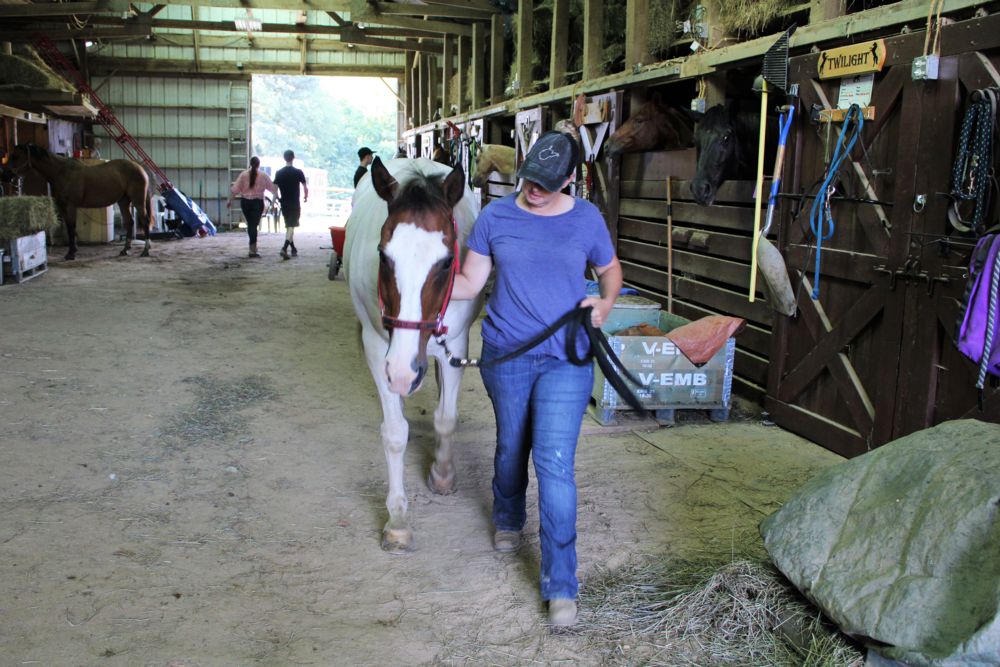 .
“He was skin and bones. He was a blank page and didn’t care if he lived or died,” Richards said. “I brought him home and rehabbed him.”
A two-time cancer survivor, Paint is 20 years old and in his prime.
“He looks great and feels great,” said Richards. “He finally knows he is home and that’s the reward I wanted.”
Editor’s Note: Richards, who is a Heart of Phoenix volunteer, wants people to know that owning a horse comes 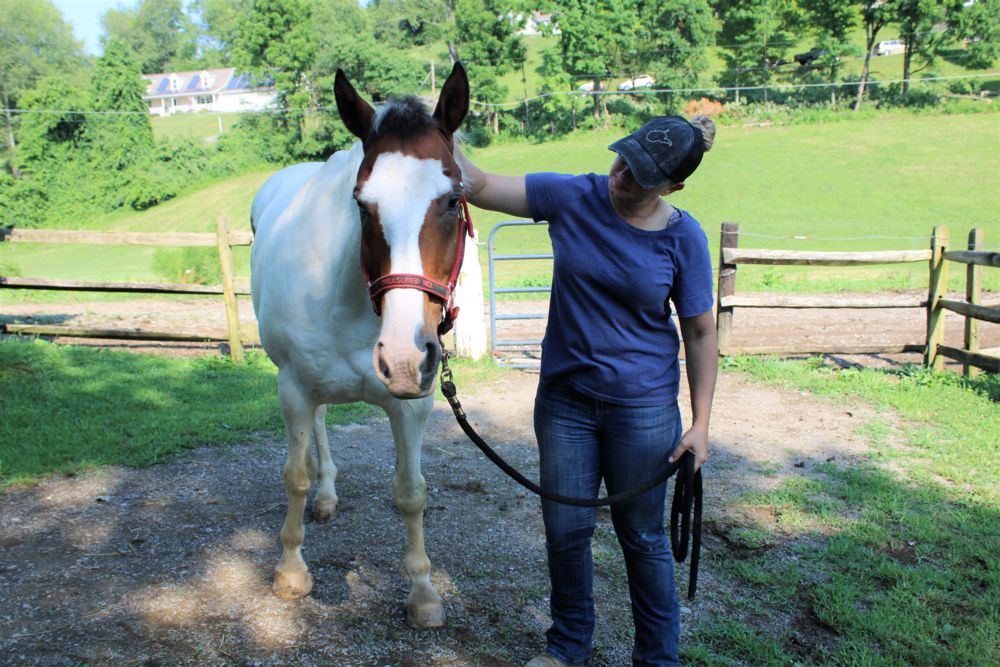 along with a lot of hard work, dedication and financial commitment. 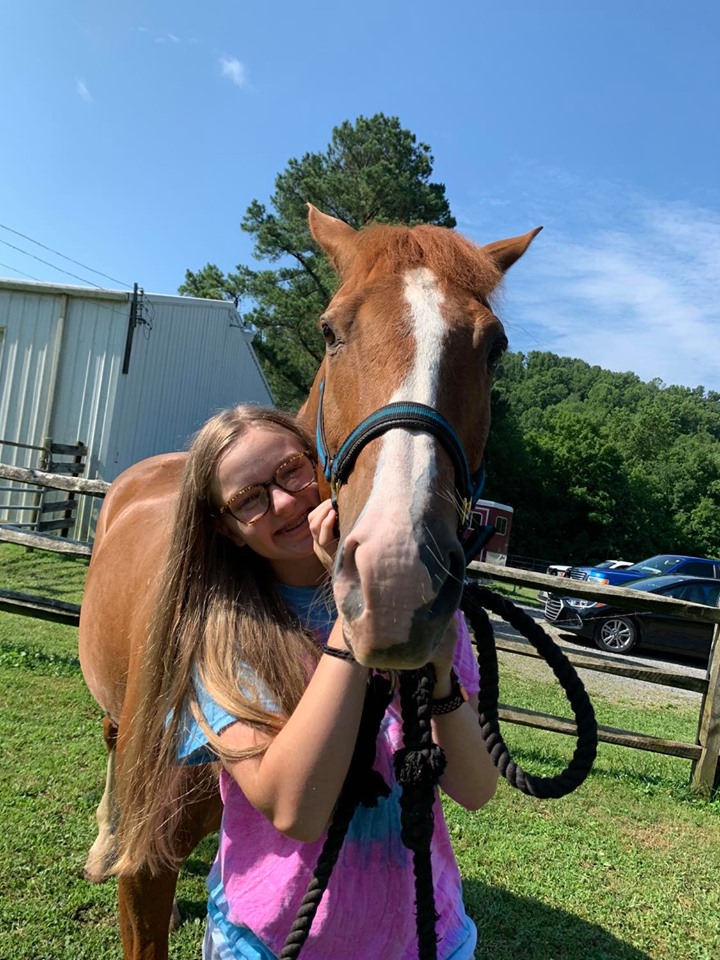 Richards is seen above with Macaroni and Paint. Pictured below is Richards' daughter Bella and her horse, Rusty.