In observance of Veterans Day, Connect-Bridgeport is honoring our military by revisiting some stories from earlier this year. This story, written by Trina Runner, originally ran in June of 2019:
One might say military service is in Jared Giguere’s blood.  Born on a Naval base in Japan to two active Navy members, it was his mother’s previous experience with the Marines that he most enjoyed hearing about as he grew up.
Determined to follow in her footsteps and become a Marine, he petitioned Bridgeport High School to not only start their own JROTC program but to also start an official Color Guard at BHS.  Although he ultimately rode the bus to Robert C. Byrd High School daily in order to 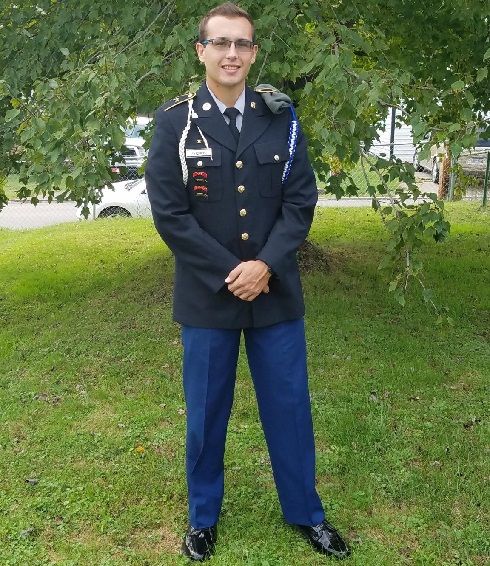 participate fully in their JROTC program, he was instrumental in helping increase the number of BHS students who participated.
“Prior to my arrival at BHS, there were only a few students who were bussed to the JROTC program at RCB,” said Giguere.  “I wanted students to have the opportunity to participate so I, along with a few others, promoted the program actively to BHS students.  Upon graduation, the number of JROTC students had grown significantly.”
JROTC gave Giguere a taste of military life, preparing him both mentally and physically to serve after graduation.  In addition to his academic work, cadets are also challenged to develop leadership skills, perform precision drills, exhibit physical fitness, and learn about military history.
“I have four semesters of JROTC under my belt,” said Giguere.  “I was honored to be promoted to Cadet Second Lieutenant this year, making me in charge of around 40 people.  The promotion was based on how active and committed I am and allowed me to supervise others in regard to conduct, attendance, grades and such.”
Only those who attended summer Officer Candidate School are selected as officers, so Giguere takes the promotion very seriously, as it represents only the top performing cadets.
“It is my responsibility to ensure cadets are at peak performance and learn the core values of the military,” he said.
After walking across the stage to get his diploma, he will immediately begin preparation for basic training at Parris Island, South Carolina.  In the summer heat, he, along with the other recruits, will endure thirteen weeks of intense training, including the notorious shouting that he is actually looking forward to.
“I expect to be yelled at,” he said.  “I know it will make me a better person, a better soldier and I am prepared to do what is necessary to serve.”
During basic training, he will not be allowed to contact family, and will refer to himself in the third person.  He will learn to function as part of a team and be well versed in safety, weaponry, martial arts and all aspects of military training.  He will pass a rigorous physical fitness test, learnt to assist casualties properly, and study military history.
“We will start our days at 4 a.m. and eat every meal together,” said Guguere.  “We will be challenged academically, physically and mentally in order to serve our nation proudly.  To be able to finally live my dream of being a Marine is very exciting to me and, although there are parts of high school that I may miss, I know this is the right path for me.”