When lights are installed for the new outdoor FieldTurf at The Bridge Sports Complex, an unexpected bonus feature will be included.
“One of the neat things they have kind of thrown in for us is a system they want to showcase at our facility called Show-Light Entertainment Package,” Parks and Recreation Director Joe Shuttleworth said. “We can actually do light shows on the field which is a neat thing that I didn’t know we were getting.” 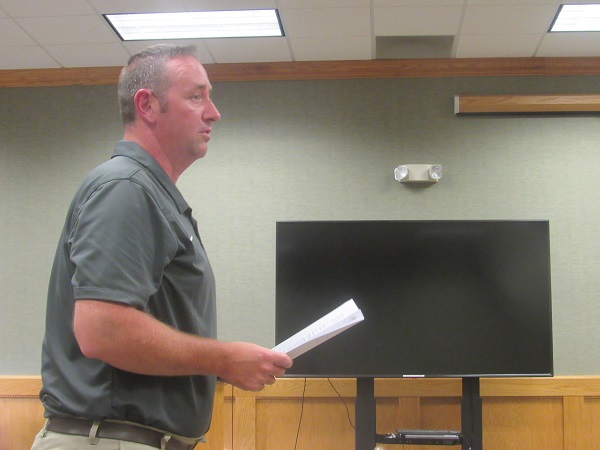 With Show-Light, a library of pre-programmed light shows can be used or custom shows and scenes can be created. They can be used to enhance player introductions, halftime shows, a big play in a game, or postgame celebrations.
Shuttleworth discussed the Show-Light feature as well as other issues regarding the lights and the turf during the most recent City Council meeting where Council approved contracts for both projects.
The lighting for the outdoor turf will be provided by Musco Lighting out of Oskaloosa, Iowa which is the same company that the City has already used frequently.
“The City currently uses Musco Lighting for all of our sports lighting,” Shuttleworth said. “It’s the industry standard and they are the best in my opinion.
The approved contract with Musco is in the amount of $530,069.00 plus a 10 percent contingency of $53,006.90. The contingency was added on in case there is an issue with anything below the surface but Shuttleworth said he doesn’t anticipate that with this project.
The new lights will feature LED technology which Shuttleworth said could also lead to lower light bills.
Before the proposed contract was passed, Mayor Andy Lang joked that they pretty much needed to approve the contract for the turf if they approved the one for the lights since a field needed to be present in order to put lights on it.
It of course was as Council approved a contract for the FieldTurf design build at $1,8777,558.14. Shuttleworth said the contingency for the turf was dropped to roughly 6.5 percent at $122,041.28 to stay under budget and because there aren’t many anticipated concerns. 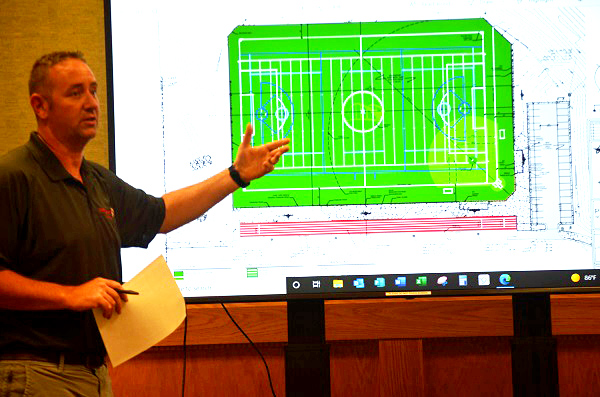 “The area in question (behind The Bridge) has been disturbed and worked several times. A lot of the storm drainage is already in place. We are not worried about a lot of issues underneath the surface.
“FieldTurf came to us with a package that brought in a company called ELA Sport that does nothing but design these facilities. They have been fantastic to work with and just from our initial discussions brought a lot of great ideas for the project to the table.”
The lighting will be installed before the turf and it isn’t expected to be long before work begins.
“The next thing will be a survey to verify what is actually there before the earth work,” Shuttleworth said. “There has to be some construction drawings, construction plans. They will go through that design process but I would say what they are anticipating is that by September, we will see dirt moving up there.”
The tentative date for completion is late Fall and the turf is planned on being available to use by early Spring, barring no issues.
A third addition to The Bridge was also approved by Council with a change order to the Albert M. Higley Company out of Cleveland in the amount of $415,239.10 plus a 10 percent contingency for a total of $456,763.00 for sub-contractor Anderson Excavating, LLC for an additional parking lot.
The new parking lot will be in the Northeast end of the facility where Higley, the general contractor for The Bridge, stored its field offices, equipment, etc. while The Bridge itself was being constructed.
The lot will feature 130 spaces.
“The funds we are appropriating tonight for the lighting, the turf, the parking lot are funds that were always available through the project,” Lang said. “We were just very conservative about making sure we didn’t overspend until we got all our change orders for the facility understood.
“Now that the building is complete, we’ve taken a look here a couple of months back at the funds we had remaining and decided to slowly start appropriating those funds to build other parts of the master plan that had always been there from the beginning.”
Editor's Note: Photos of Shuttleworth from recent Council meetings.