Outside the Tribe: Game Might Not of Counted but It Certainly Mattered

By Chris Johnson on October 04, 2021 from Outside the Tribe

Somewhat lost in the shuffle with the scheduling drama last week for the Bridgeport High School football team was another year added to one of the program’s running state records. 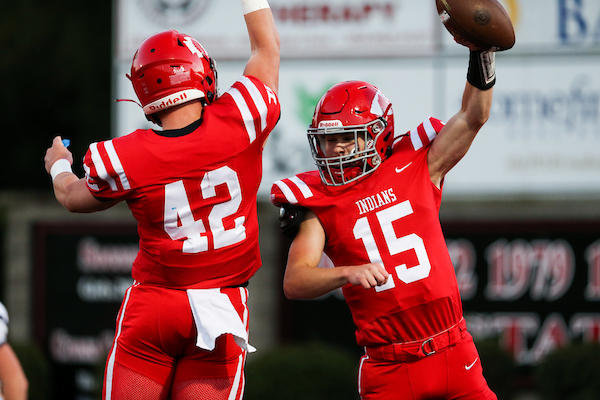 With win No. 5 the Indians secured a non-losing record for the 54th straight year. I’ve typed a sentence about them extending that streak for several years but the magnitude of it really hit me hard this year.
I was born in 1973. The Indians last had a losing season in 1967. This program has not had a losing season the entire time I have been alive with six years tacked on for good measure.
That’s an absolute mind-boggling streak and one that probably doesn’t get talked about statewide nearly enough.
Actually, it’s one of two mind-boggling streaks as in a couple weeks I will be typing Bridgeport extended its streak of making the playoffs to 29 straight years.
Win No. 5 of the 2021 season came in unusual fashion.
To summarize, Bridgeport was supposed to play Parkersburg South last Friday. Last Wednesday, a COVID issue for South popped up preventing the Patriots from playing. East Fairmont came to play at Wayne Jamison Field but it was deemed an exhibition game that wouldn’t count toward either team’s overall record or in the WVSSAC playoff ratings.
While all that was going on, the season opener that was supposed to be played at Buckhannon-Upshur officially became a forfeit as B-U and Bridgeport reached the point that there was no logistical way for the game to be rescheduled. That forfeit is what led to win No. 5 for the Tribe.
The South game can still potentially be made up and if all possibilities are exhausted without a rescheduled game, that will also become a forfeit victory for the Indians. So, one way or the other, Parkersburg South is Bridgeport’s 10th opponent. 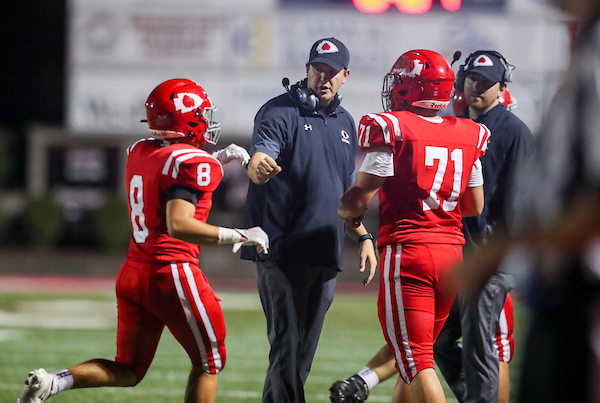 I believe that is where some of the confusion came in on Thursday and Friday. East Fairmont didn’t replace Parkersburg South (or Buckhannon-Uphsur). East Fairmont was an addition that yes doesn’t technically count but I think to say that the game didn’t matter isn’t the best way to look at it.
There are several reasons why Bridgeport hasn’t had a losing season for 54 straight years. Great players? Sure, plenty of them. Community support? Absolutely. Pride and tradition? You bet there is.
And of course there is coaching. Not just who the coaches are, which is certainly impressive in its own right. But how they coach is a factor too.
When thinking about the type of coaches BHS football has one of the first games that pops in my head was a 2009 Class AAA quarterfinal playoff game against George Washington. Even though the game was at Wayne Jamison Field, the Indians were considered underdogs. The final score of that game, Bridgeport 31, George Washington 0.
And the thing I remember the most, midway through the third quarter the starters were out. You looked across the way at the GW sideline, every coach over there was deflated with either their arms crossed or their hands in their pockets.
The Bridgeport sideline? Every reserve was getting coached like every play was the most important one of the season. And that’s kind of the point, right? Throughout the years, every BHS staff takes that approach from August until the last snap of the season.
In 2008, the Indians played Calvin Coolidge, a school from D.C. with a quarterback bound for Syracuse and a wide receiver bound for Virginia Tech. Nobody gave the Indians a shot in that one either. Final score, Bridgeport 46, Calvin Coolidge 25 and three of the Coolidge touchdowns came late against BHS reserves. 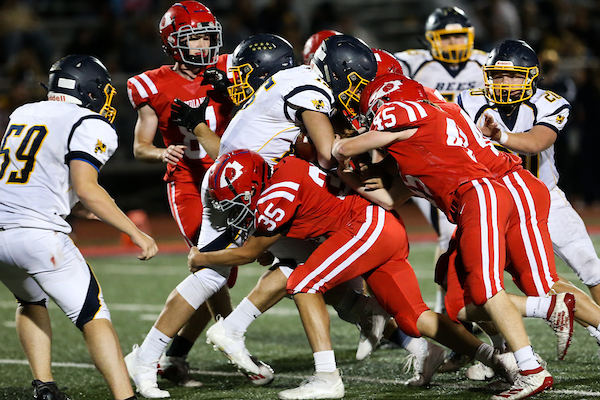 Turns out, to be able to pass the ball against Bridgeport, you have to pass block and Coolidge didn’t. The play up front on the other side of the ball was even more lopsided as the Indians averaged about 8 yards per rushing attempt behind a line that moved every one of Coolidge’s linemen 5 yards deep before a running back even hit the hole. That comes back to how the BHS linemen are coached every single day.
Or how about in 2011 when Cabell Midland came to BHS for the quarterfinals and again the Indians were considered an underdog. Looking at the Cabell Midland sideline it appeared as if every player was 6-foot-4 and 250 pounds and there was at least 100 of them. Yet not one of them could tackle Brett Hathaway and not one of them could block Garrett Stanley. Final score, Bridgeport 41, Cabell Midland 8.
Bridgeport players are taught such good fundamentals that proper technique and execution can go a long way against a team that is bigger than you.
Of course none of the games mentioned above are a guarantee that Bridgeport is going to win every game it ever plays. Sometimes there are going to be mistakes, sometimes a team just has more athletes or depth. Or in the case of Spring Valley last year, some teams are just better. But I can promise you, Bridgeport is not going to lose a game because the players weren't coached up.
Bridgeport football coaches are constantly coaching. They are never going to pass up an opportunity to coach and that applies to every player on the team. They are also never going to pass up an opportunity to get a younger or less experienced player in the game when the situation allows for it.
Think about the recent dominance at the Class AA level, how many times were the starters out of the game before halftime? What would Dante Bonamico’s career stats look like if he played four quarters every week? How many shutouts would the defense have if it wasn’t for fourth-quarter scores by a team’s ones vs. Bridgeport’s threes?
That isn’t just regular season games against Big 10 Conference schools either. Look at the 2014 Class AA state championship game against Frankfort, a really good Frankfort team by the way. Dylan Tonkery had a Super Six record 315 rushing yards and I don’t think he touched the ball after halftime as the Indians won 43-7.
Look at the second game of this season, Cam Cole had 205 rushing yards on five carries and four touchdowns against Liberty. What would have his numbers looked like if he had 10 carries or 15 carries?
I’ve seen it time after time. Bridgeport gets a game where it dominates early and often and Bridgeport gets its second and third-string players into the game, where they are coached with the same passion and they gain invaluable in-game experience. To me that is the single greatest reason why Bridgeport has the type of program that can put together a non-losing season streak for 54 straight years.
On last week’s Tyler Phares Show with the Voice of the Indians Travis Jones, Phares said something that has stuck with me. He said, “I don’t want bag holders, I want football players.” 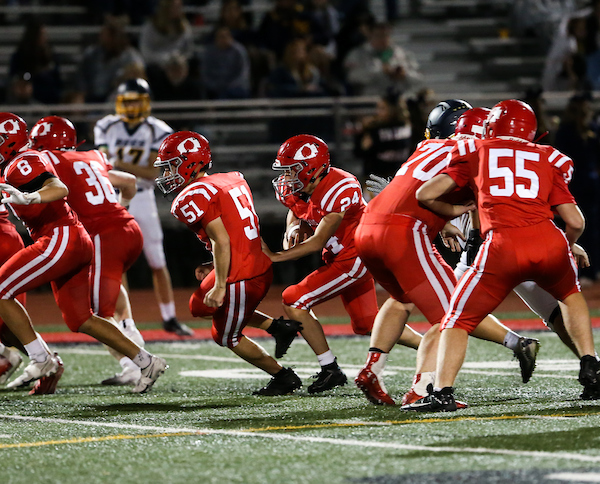 What he means is there isn’t room in the program for kids who just want to wear a jersey to school and get to go on bus trips. If you play football for Bridgeport High School you are going to get reps. It might be at the junior varsity level, it might be for the freshman team. It might be in the second half of blowouts, it might be in mid-season exhibition games.
If the COVID pandemic has taught us anything, it is to not take anything for granted. A lot of high school football players have had high school football games taken away from them the last year and a half for no fault of their own. That alone is reason enough to think that last Friday’s game with East Fairmont mattered.
Players got to run out of the tunnel, they got to hear the band playing in the background. They got to put on the pads and play a game they love. That matters.
The coaches had the opportunity to do what they do best — coach. They got to give reps to the starters, they got a lot of reserves onto the field. They made some football players better football players. That matters.
Mark my word, there will be a player who saw significant playing time against East Fairmont show up and be an even better player at practice this week. And when his time comes to get in the game again he is going to play with more confidence.
That perhaps matters most of all and that is why this program hasn’t had a losing season since 1967.
Editor's Note: Top photo is of Cam Cole (15) and Landyn Reppert (42) celebrating after a touchdown run by Cole against East Fairmont. Second photo shows Coach Phares congratulating Derek Starkey (8) as he comes off the field. Third photo shows the BHS defense making a play, bottom photo features Zach Rohrig (24) looking for running room. Photos by www.benqueenphotography.com