One of the state’s premier high school basketball players, Bridgeport senior point guard Gabby Reep, finalized her plans to compete at the next level as on Monday as she signed her National Letter-of-Intent with Fairmont State University.
The signing ceremony took place in front of a crowd of family, teammates, coaches and friends in the BHS library.
“I like the coaches a lot,” Reep said of Fairmont State head coach Stephanie Anderson and assistant coach Miki Glenn. “It was real appealing to me to play for female coaches because I never have before. And I just really like their style of play at Fairmont. I think I will fit in well there. 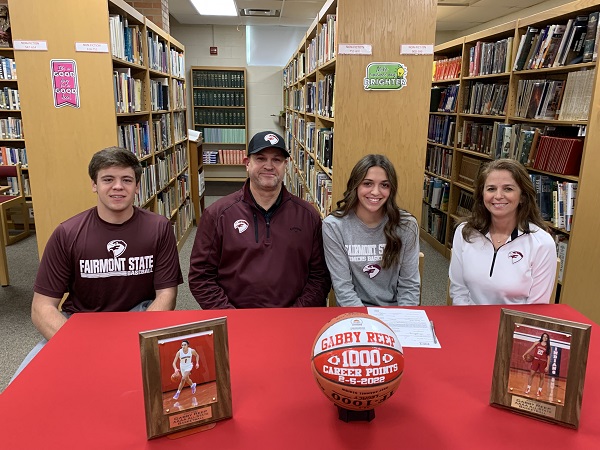 “I kind of had it in the back of my mind for a while that I wanted to go there. I was open to offers from other schools but I didn’t want to go too far from home.”
Anderson and Glenn were both state player of the year award winners, and multiple-time all-staters before successful collegiate careers at California University of Pennsylvania.
Since they joined the Fairmont State program, they have had a habit of attracting some of the state’s top players to becoming Falcons. This year’s roster features nine players from West Virginia who were all-state players in high school.
Reep will fit right in as she is a two-time Class AAAA first-team all-state selection.
In her junior year, she earned first-team honors after averaging 22.1 points per game in addition to 5.7 rebounds, 3.4 assists and 2.9 steals per game.
As a sophomore, Reep led the way for the Indians in their first season at the quad A level at 19.5 points per game in addition to 5.7 rebounds, 4.2 assists and 3.2 steals per game.
Reep was an impact player right away for the Indians as a freshman as she was a driving force in getting the Indians to the Class AA state tournament. She earned third-team Class AA all-state honors that season after averaging 15.2 points, 4.8 rebounds, 4.7 assists and 4.6 steals per contest. 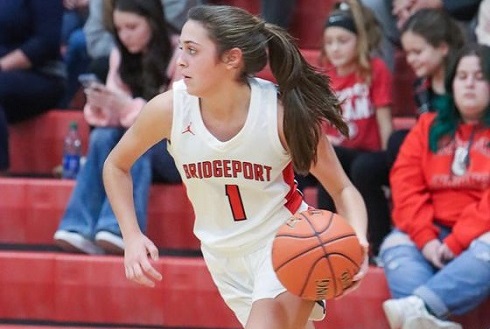 “It’s nerve-racking when you are a freshman even if you have that kind of talent,” BHS coach Herman Pierson said. “You’re a point guard. That’s like being the quarterback in football and you are a freshman. Here it is, it’s on your shoulders.
“It’s something I didn’t really want to ask her to even though I knew she was capable of doing it. But we had no choice and as it turned out it worked out fine. And she’s just gotten better and better.”
Reep surpassed the 1,000-point mark for her career midway through her junior season and has an outside shot at catching Glenn, who is Bridgeport’s all-time leading scorer with 1,775 points.
“I don’t know, that might be tough to get,” Reep said with a laugh.
As a good a scorer as she is, the one small critique some people, including Pierson, might make is that Reep is sometimes too unselfish. But that’s just the point guard mentality shining through.
“There’s times I wish Gabby was just stop, step behind the 3-point line and shoot instead of trying to run a play,” Pierson said. “She’s so unselfish and really I don’t want her to change her game. She’s always looking to get the rest of the team involved and that’s what you want from a leader and a point guard.
“The thing that really sets Gabby apart is her basketball IQ. She loves the game and she understands the game.”
Reep’s brother, Quintin Reep, is a member of the Fairmont State baseball team. 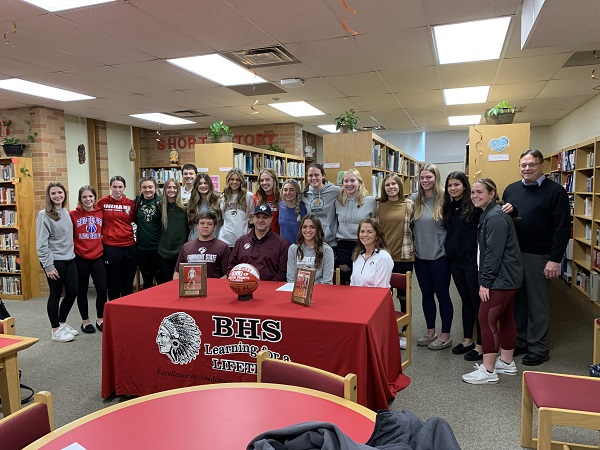 “Yeah, that’s awesome,” Reep said. “I know my brother really likes it there and I think I will too.”
As far as a major, Reep says she is planning on exercise science with a goal of getting into occupational therapy or something health sciences related where she can help people.
With an already banner high school career on her resume, Reep turns her attention to her last senior in a Bridgeport uniform. She has the honors and the stats. She’s firmly established herself as one of the state’s top point guards. Through it all she has always show the work ethic to finds ways to get better. That’s not going to change even with her collegiate plans set.
“There’s always room for improvement,” she said. "There’s always room to get better.”
Reep and the Indians open the 2022-23 basketball season with a home game against Hurricane on Dec. 3.
Editor's note: Top photo shows Gabby flanked by her brother Quintin (left), father Billy (right) and mother Amelia (far right) during the sigining ceremony. Middle photo by Joe LaRocca shows Reep in action during a game last season. In the bottom photo, Reep is surrounded by her family, teammates and coaches to celebrate her signing.