Bridgeport High School senior volleyball standout Alexa Martin will continue her career at the next level as she signed her National Letter-of-Intent with Fairmont State on Friday.
The signing ceremony took place in the BHS library in front of a crowd of family, friends, teammates and coaches. 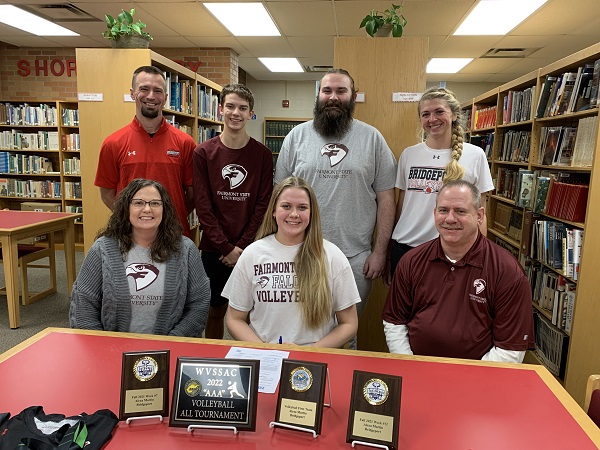 “When I visited campus I had a lot of fun with the girls and I went to Fairmont State camp so being around the girls and hanging out with Coach (Travis) Hinkle it just felt like home,” Martin said. “It was just fun to be around those people.”
Martin, a three-year starter for the Indians, led the team to state tournament for the eighth consecutive season. The Indians defeated Woodrow Wilson in the opening round to advance to the semifinals where they fell to eventual state champion Musselman. BHS finished the year with a record of 37-13-2.
This year, Martin had 559 kills, 177 blocks, 77 aces and 235 digs and surpassed 1,000 career kills.
She recently earned first-team All-Big 10 Conference honors and is a strong candidate to be a Class AAA first-team all-state selection when those honors are announced this coming week. Martin was a second-team all-state selection as a junior and an honorable mention selection as a sophomore. 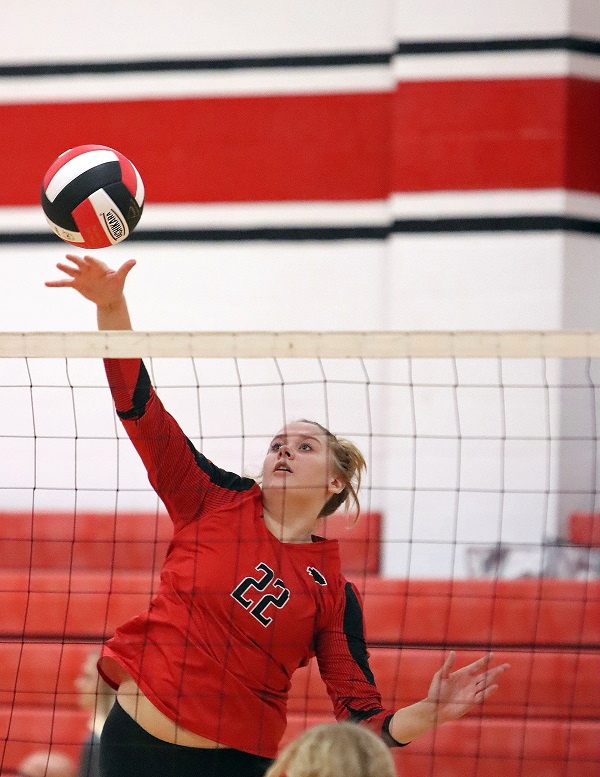 Those are some lofty accomplishments for someone who almost had their career cut short.
“My freshman year I tore my ACL and meniscus so being here right now is kind of surreal because I didn’t think I would get here,” Martin said. “Being injured and playing with girls that made me want to get better and play in college that’s what makes this my favorite sport.
“With my injury, that was also during COVID so I was doing therapy through a Facetime video. My motivation was down to the point that I’m pretty sure I told people I just didn’t want to play anymore. When I actually got back on the court I realized this is my sport. I love playing on this 30-foot court with a net.”
With her height, it doesn’t take long to watch Martin and realize she’s an impact player at the net, on both offense and defense. But the more one would watch, it was quickly evident that her play in the back row, her ability to serve and her setter-like vision gave her all the tools to be considered a talented overall player.
She also showed steady improvement each season at high school and on the travel circuit and eventually added strong leadership skills to her skill set. This was never more clear than her senior season with BHS where she set the tone for a team that somehow managed to play loose and focused at the same time.
“This year we really wanted it to feel like a family more than just a team,” Martin said.
Everything she brought to the table certainly wasn’t lost on her coaching staff.
“We always go back and go through from their freshman year to their senior year, talk about their growth, talk about everything they had to overcome,” BHS coach Ali Burton said.  “Coming out of that freshman year, blowing out her knee when she was playing varsity helping us already. as hard as that was, everything happens for a reason.
“It made her an even better player in the long run. Every year she was a leader and a voice on the court for us. She sees the open spots. She has the vision, her blocking, ability to read hitters, from our page she’s one of the best to ever play that position.” 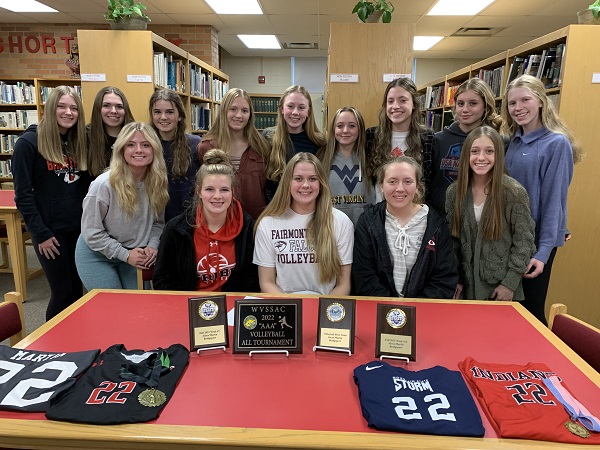 Martin says she plans on going into the Nursing program at Fairmont State.
Editor's Note: Top photo shows Martin at her signing ceremony with her family and coaches. Middle photo by Joe LaRocca  is one her 1,000 career kills and she is surrounded by some of her BHS teammates in the bottom photo.