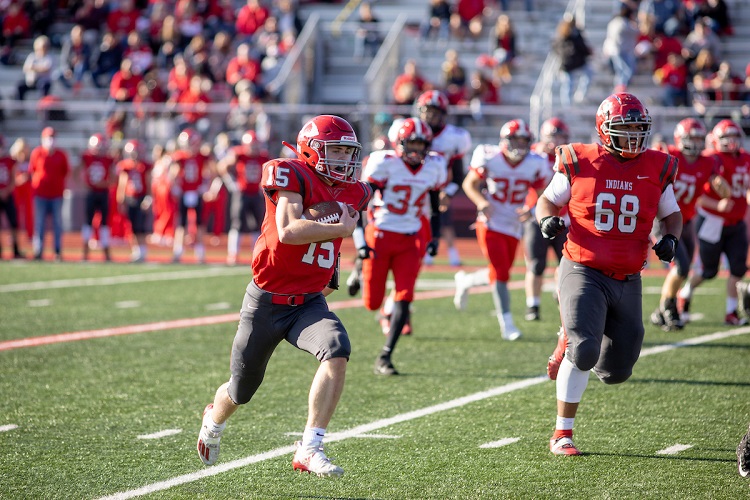 Cam Cole wasn’t sure what type of game he would have in Bridgeport’s first-round playoff game against Washington but he had a pretty good idea the Indians’ had an advantage up front.
As is often the case for the Tribe, when the offensive line asserts itself, the yards and touchdowns come in bunches. They certainly did on Saturday afternoon at Wayne Jamison Field where the No. 5 Indians blasted the No. 12 Patriots, 55-7, in a Class AAA opening-round game. 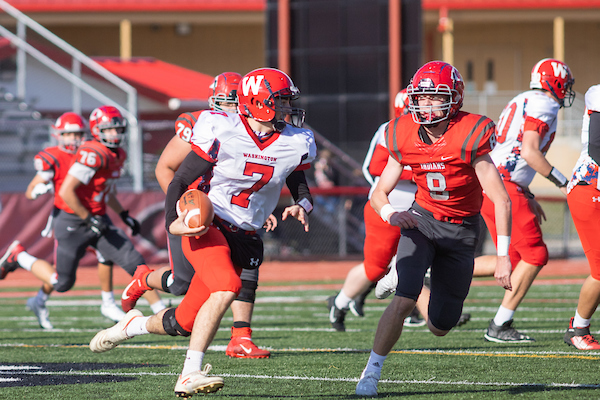 With the victory, the Indians improve to 7-1 and they advance to face No. 4 Martinsburg in the quarterfinals. Details on time, date and location for that game will be finalized on Sunday.
Cole finished with 221 rushing yards on just 12 carries and four touchdowns. He also completed 3-of-4 passes for 95 yards and a touchdown.
As a team the Indians finished with 589 yards of total offense, including 494 on the ground.
“We opened up the playbook to throw the ball a little bit and I think that helped,” Cole said.
The Indians found the end zone on each of their six first-half possessions and they didn’t need much time on any of them. Four of the drives lasted four plays or less.
The longest first-half drive for BHS was seven plays and it was the last one of the first half. The Indians took over on their own 36 with 2:38 showing on the second quarter clock. J.D. Love broke loose for a run of 47, the longest of his career, on the first play. 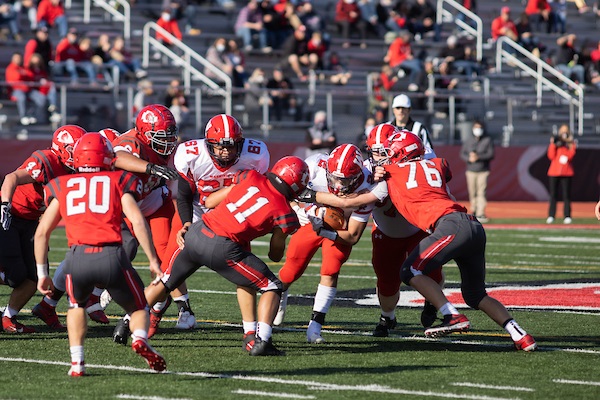 The drive appeared at first to end on the next play as Cole scored on a 17-yard run. But the Tribe was called for a clipping penalty setting off a stretch where the Indians were going in the wrong direction.
Another penalty, two plays that gained negative yardage helped set up a fourth-and-long for the Indians from the 31 with 28 seconds left before halftime. This time, Cole’s touchdown held up as he scored on a 31-yard run to make it 42-7.
Cole also had TD runs of 66 yards, 1 yard and 10 yards before the 31-yarder which was his 18th of the season.
“That first one was a little different,” Cole said of the 66-yarder. “Usually I break loose like that because of my speed, it’s nice to know I have the strength to break a couple of tackles then use my speed to get a touchdown.”
Love previously had another huge play to set up a BHS touchdown as he reeled in a pass tipped by Tanner Saltis for an interception and returned it 40 yards. Three plays later, Muller scored on a 10-yard run.
Muller scored the first TD of the game on a 5-yard run. Austin Springer booted his first of seven PAT kicks to make it 7-0 and the Indians were off and running. 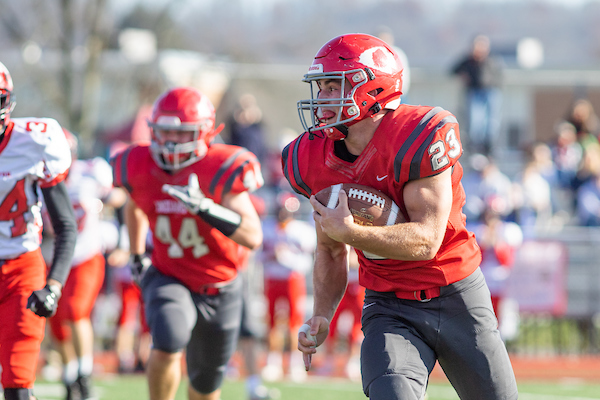 “Cam will tell you just like the rest of the backs will that it’s the linemen up front, it’s the blocking backs,” BHS coach John Cole said. “They give the backs the opportunity to do things like what you saw out here today. And when you have athletes like Cam and J.D. and J.T, that’s what you are going to see.”
One of the linemen in particular, Coach Cole raved about after the game was Tanner Saltis, who once again was a force on both sides of the ball.
“People don’t have any idea about Tanner Saltis,” Coach Cole said. “People don’t understand what he does for our offense. He is a really good football player. His position at left guard is instrumental in what we do. But you look at him on defense and he just goes out and does his job.”
Saltis and company on defense held the Patriots, who finish the season at 5-5 and made it the playoffs for just the second time in school history, to 153 yards of total offense.
During one stretch, Washington had five out of eight plays go for losses in the backfield including a sack for Saltis. 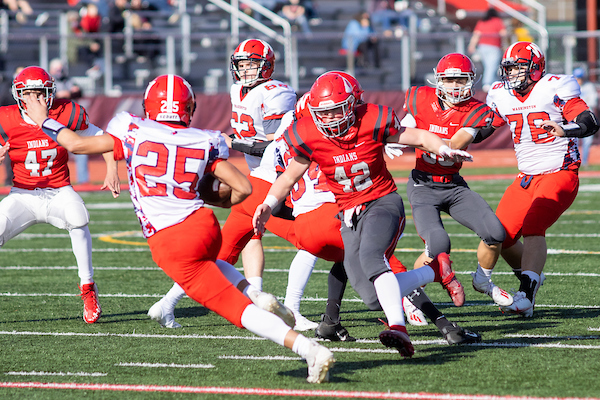 Washington avoided the shutout with a first-half touchdown pass of 15 yards from Frankie Amore to Johnny Williams that cut into a Bridgeport lead at the time of 28-0.
BHS tacked on TDS on its first possessions of the second half. The first was 30-yard touchdown pass from Cole to Hayden Moore and that pretty much brought and end to the day for the Indians’ starters.
Trent Haines added a 1-yard touchdown run for the Tribe that made it 55-7 late in the third quarter.
“I was real pleased with their effort,” Coach Cole said. “We started strong and we played well on offense, defense and special teams.”
Muller finished with 90 yards on nine carries and the two TDs. Love added 80 yards on seven carries.
Editor's Note: Top photo is of Cam Cole, second photo features Hayden Moore, third shows Kemo Summers and Tanner Saltis leading the way for a tackle. Fourth photo is of J.T. Muller and bottom photo is of Landyn Reppert closing in on a tackle. All photos by www.benqueenphotography.com