One of the many things that has set Martinsburg apart from the rest of the Class AAA field since 2010, is the small margin of error the Bulldogs force their opponents to operate with. 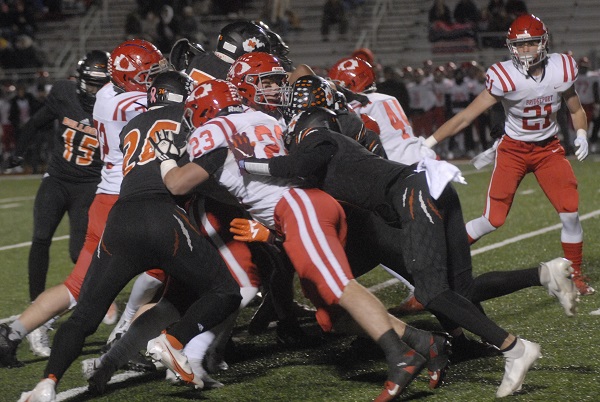 No. 3 Bridgeport had its opportunities in Friday’s semifinal game at Cobourn Field. But the No. 2 Bulldogs took most of them away quickly en route to a 21-0 victory that sends them back to Wheeling and the Super Six.
Martinsburg has won eighth state championships since 2010.
Without one-half of its two-quarterback rotation as sophomore and leading rusher Murphy Clement was out with a foot injury (and will not play next week in Wheeling), the Bulldogs went strictly with Ezra Bagent, the younger brother of former Martinsburg all-stater Tyson Bagent.
Ezra Bagent completed 16-of-20 passes for 200 yards and a pair of touchdown passes to Hudson Clement. Xavier Kendall added a fourth-quarter touchdown.
The Bulldogs defense stole the show though as Bridgeport was shut out for the first time since a 25-0 loss to Keyser in in 2012.
The Indians finished with 192 rushing yards against a defense that came into the game giving up just 83 per game. However, Bridgeport was never able to break that one big run. They were close several times, but Martinsburg’s defense was there to deny it every single time. 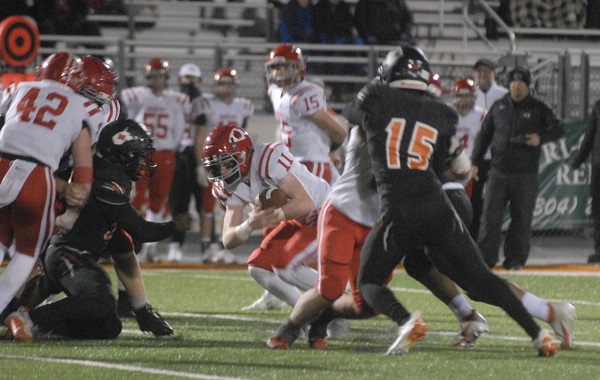 “You create a hole or find a seam and they close it quickly because of their team speed and their ability to tackle” BHS coach Tyler Phares said. “They are an excellent team.”
Still, the Indians were down just 7-0 at halftime and 14-0 heading into the fourth quarter as their defense came to play as well.
“Our kids weren’t scared, they came here and battled,” Phares said.
Both teams put together long drives on the first two possessions only for the defense to come up with a big play to force a turnover on downs.
The Indians marched to the Bulldogs 21 and had a fourth-and-1 play where Aidan Paulsen appeared to have a first down but the ball was spotted at the 20.
As expected the Bridgeport drive was primarily on the ground and when the Bulldogs took over, they primarily moved it through the air. They advanced to the Bridgeport 8 and had a fourth-and 1 of their own that the Indians snuffed out for no gain and to get the ball.
Aidan Sparks had his first of two sacks for the Bridgeport defense on that first drive.
Landyn Reppert picked up a gain of 13 on the first play of the next drive but that would be it as the Martinsburg defense tightened and forced a punt.
Clement kept the ball on a reverse on the first play for 17 yards and three snaps later he caught an 11-yard pass from Ezra Bagent for his 18th touchdown of the season.
The two defenses then took over the rest of the first half.
The Indians got just what they needed to start the third quarter as Cam Hess sacked Bagent on third down to force a three-and-out and a Martinsburg punt.
The Bulldogs defense returned the favor though. Then three straight run plays led to Bagent throwing a play-action pass to Clement in stride for a 53-yard touchdown and 14-0 lead.
Kendall who finished with 63 yards on 11 carries scored on an 18-yard run with about 6 minutes to go to close out the scoring.
Reppert led BHS with 118 yards on 24 carries. Paulsen added 44 yards on 14 carries and Cam Cole finished with 28 yards on 13 carries.
Editor's Note: Top photo shows the Martinsburg defense smothering a Bridgeport running back, bottom photo features Paulsen looking for a running lane. Photos courtesy of Rick Kozlowski/The Journal