By Connect-Bridgeport Staff on February 13, 2020

According to a media report as well as multiple individual reports, West Virginia University has added to its walk-on pool for the upcoming season. And the pool now has perhaps the biggest fish in the state. 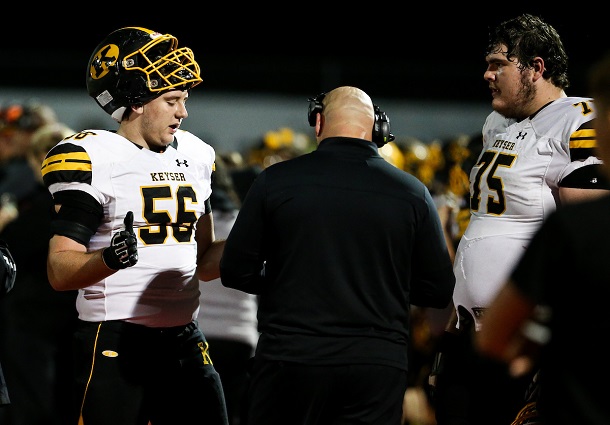 As first reported in the media by The Exponent Telegram and The Blue Gold News, Keyser's Shawn See will be joining the Mountaineers for the 2020 campaign in Morgantown.
Many may remember See locally. He played back on Oct. 25 against Bridgeport at Wayne Jamison Field in a game won by the Indians in convincing fashion.
See also played another local squad. The Golden Tornado battled Robert C. Byrd earlier in the year.
According to the Keyser fooball roster, the senior is one big young man. The roster has See listed at 6'10 and weighing 350 pounds.
See played offensive and defensive line for the Golden Tornado this year. The team, which has a lengthy series witih BHS that has come to an end with reclassification, made it once again to the postseason.
Editor's Note: Shawn See, to the right, is shown talking to the Keyser coaching staff during the game this year at Jamison Field. The other player is also not small in Dalton Ray who comes in at 6'4, 270 pounds. Photo by www.benqueenphotography.com.