The Grapevine: Looking Back on the Life of Folly Basil

This past week, we bid a fond farewell to Folly Basil. Folly epitomized the woman of the 1950’s. She was a wife, a mother, a daughter, and a friend. She volunteered for programs she believed in, and she was a faithful woman and she volunteered for her church. She was a talented self-taught artist.
This is the part of Folly that I want to talk about. I met Folly at the Italian Festival when her husband Tom, was chairman of the board. We became friends that lasted forever. She helped with whatever she was asked to do, but she will always be remembered for her assistance 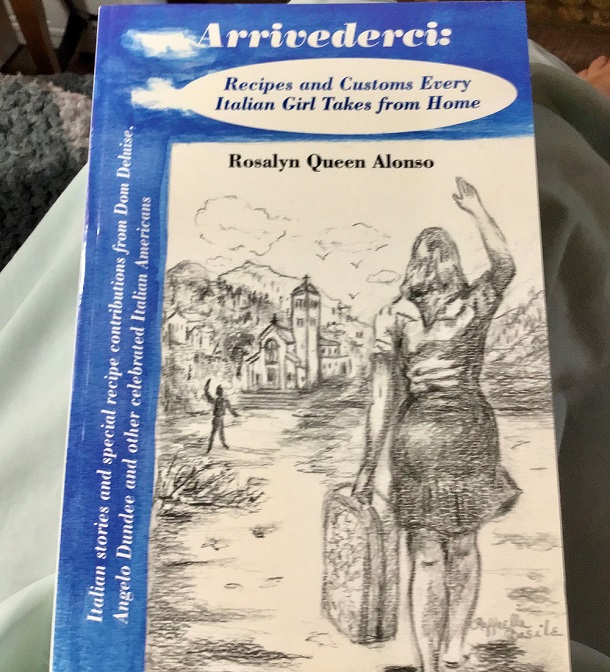 with the one-of-a-kind Festival Fashion shows. She worked with the committee to produce an event that the area talked about until the next year. Folly worked mostly with the decorations and many times we incorporated her paintings with the theme. She would always offer one of her paintings to be used as a fundraiser
We traveled several times to Washington, DC to represent the festival, and it was always a pleasure to be in her company. She was a true lady.
Around the beginning of 2006 the cookbook that I had been working on for several years was ready to go to print but I had no cover. The book was really a cookbook, but incorporated with each recipe were customs, so I had to have a special cover.
Folly and I had several conversations and it seemed we were both on the same page, but it was up to the artist to produce a rendering. We both knew we were enjoying being Italian girls and having been brought up by traditional Italian parents thought that the cover could depict this.
The Immaculate Conception Church took the center as most customs and foods was centered around religious celebrations. The young Italian girl is waving goodbye as she moves off to start a new life. The boy in the picture surely must be her brother. And down in the corner is her famous signature.
And on the day when Folly was laid to rest, I looked at the painting with a different perspective. This is Folly in front of the church waving goodbye to all of us with her suitcase, which surely has painting supplies that she will use in Heaven recreating beautiful pictures. Rest In Peace my friend and thanks for the memories.
As we get closer to Easter remember to get your peanut butter eggs and fresh Easter bread at the PWA. Call 304-624-6881 to place an order.
My mother, the predictor, is true once again as we are enjoying a long, cold Easter snow. Get ready to welcome a beautiful Easter morning.
Stay safe, stay healthy and until next week “Now You Have Heard It Through The Grapevine.”