The Grapevine: Some Names from the Past as Family Member Celebrates their 65th Wedding Anniversary

By Rosalyn Queen on September 02, 2021 from The Grapevine

Last week, on August 18, we celebrated the 65th anniversary of my sister, Joan Burnett Smith, and brother-in-law Virgil Smith.  I remember the day 65 years ago as though it was yesterday.
Joan is the daughter of the late William Burnett and Florence Roberti Burnett.  Virgil’s parents are the late Virgil and Ruth Smith.  Joan and 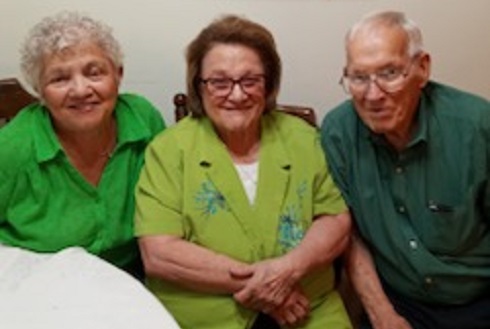 Virgil are the parents of Vincent (Evelyn), Vanessa (Ron) and Bridget and Jimmy Cann.  Their grandchildren include Jenna Robey, Hampton Hammond, Victoria Barnosky, and Nicholas Smith.
Sixty-fvie years ago, they were married at St John’s Catholic Church by Father Colombo Bandiera.  The late Dr. Franklin Oliverio was best man, and I was the maid of honor.
Their reception was held at Clique Club. An old Italian custom was observed with all our great aunts coming to our house the week before to make dozens of cookies for the reception.
They spent their honeymoon at Fort Knox, Kentucky where Virgil was serving in the Army. Before retiring Joan was employed as the director of the United Technical Center and Virgil was a dental equipment representative.
They are active members of the Immaculate Conception Church where Virgil serves an usher and Joan is a Reader. They enjoy spending time with their children and grandchildren and having that Sunday dinner.
We honored the couple with a dinner hosted by their children.
I would like to ask my readers to remember a member of my family who Is have having health problems.  You know I believe in miracles if we only ask for them.  Remember her in your prayers
Just an update on my eye problem. I will be having surgery at WVU for the third time, hoping it will take this time.  I have been staying at home as much as possible hoping I will remain healthy for this upcoming surgery.  I hope that all of you are following the pandemic restrictions and will not contact COVID.
Stay healthy, stay happy and until next week “Now You Have heard It Through The Grapevine.”
Editor's Note: Pictured, from left, are Rosalyn Queen, Joan Smith, and Virgil Smith.