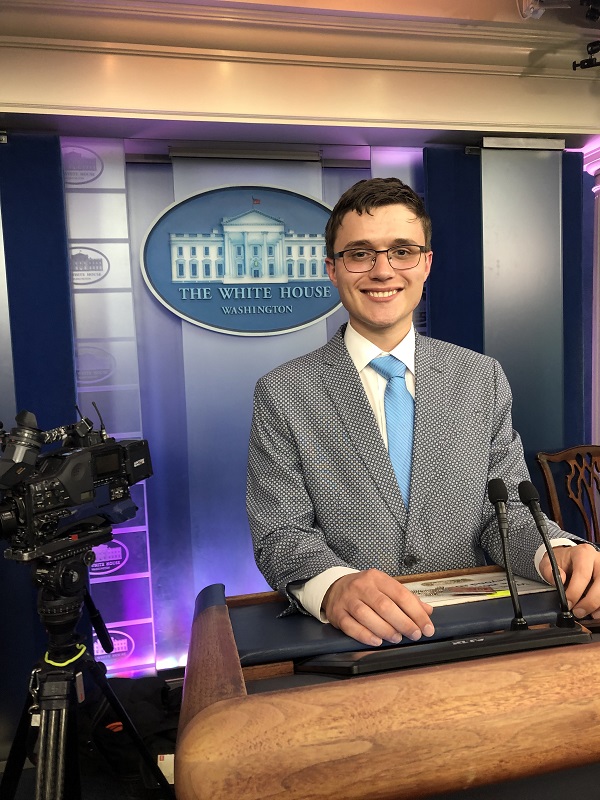 When the political journalism company, POLITICO, announced its 2019 class of Politico Journalism Institute (PJI), only one West Virginia student was among those selected for the prestigious honor:  Douglas Soule.  The educational initiative is dedicated to diversifying Washington-area newsrooms and offered 16 university students from 12 states the opportunity to attend PJI for an intensive training in political and policy reporting.
The ten-day program was held from May 28 to June 7, partnering with American University and the Maynard Institute for Journalism Education.  Some of the best and brightest students in college journalism were invited to participate and be mentored by top notch Washington area journalists and industry leaders in an intense, interactive environment.
Students witnessed first-hand how journalists break daily stories dealing with politics and policy and were encouraged to network with Washington’s elite in order to familiarize themselves with those impacting the headlines.  They split their time between American University and POLITICOheadquarters in Arlington, Virginia.  The Politico Journalism Institute is one of the most prestigious programs of its kind in the country and Soule savored the opportunity.
“Each session of the institute helped me understand another element of journalism,” said Soule.  “I know this experience will strengthen my foundation of my journalism career and I was privileged to participate in conversations about diversity, ethics and policy with other reporters whom I admire.”
This year marked the sixth Politico Journalism Institute and also the largest. One of the highlights of the program was the opportunity for reporters to have their work published in POLITICO.  For Soule’s piece, he focused on his home state and intersection of opioids and the increased number of HIV patients in Cabell County.  The article can be found here:  https://www.politico.com/story/2019/06/06/the-intersection-of-opioids-and-hiv-1356580
Prior to his PJI experience, Soule has made a significant impact within the borders of West Virginia.  As a junior at Bridgeport High School, he wrote books, a play, and articles for Connect-Bridgeport.  He interned with WVU’s student newspaper, The Daily Athenaeum, before beginning his freshman year at the university and served as an assistant news editor during his first year.  The following summer, he interned with The Charleston Gazette-Mail and was promoted to editor-in-chief of the DA his sophomore year at WVU.  He began this summer doing investigative research with Reed College of Media before leaving for PJI.
After completing his time with POLITICO, Soule is spending the remainder of his summer interning with The Globe Post, known for publishing breaking news, feature articles, interviews and commentaries.  During his first week, Soule has the opportunity to cover a House Intelligence Committee hearing on artificial intelligence, manipulated media and deepfake technology.
“I am so incredibly thankful to the mentors, educators and supporters who have made these experiences possible and look forward to returning to my job at the DA in the fall with a new perspective on journalism,” said Soule.