Not too long ago, Victoria Drake pulled up to a mechanic’s shop because she had a nail in her tire.
When a guy came out to look at the tire he asked, “Oh, do you sell homes for Red Door?”
Drake replied, “No sir, I build them.” 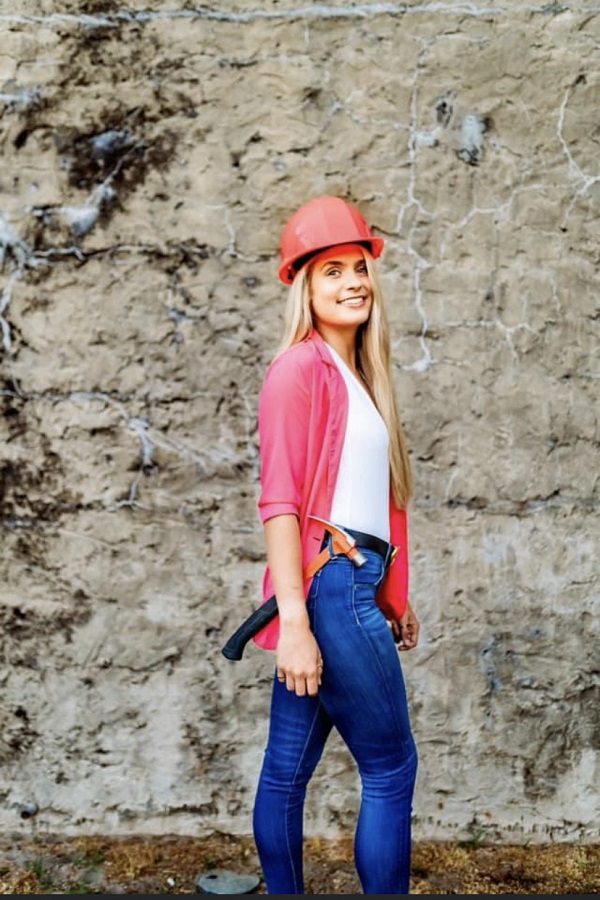 It’s a situation the 2015 graduate from Bridgeport High School finds herself in frequently — being a female in a predominant male field.
“They always think that they offend me but I tell them, ‘Don’t worry about it,’” Drake said. “That’s a daily conversation I get to have. It’s not that it’s aggravating but it is a new experience every time to see the look on their face when they realize I am the one actually building the house. It’s nice to let them know, this is something women can do too.”
She’s not only doing it, she’s excelling at it in a trailblazing speed.
Red Door Homes is a custom homes franchise all over the east coast and as far away as Texas. There are four divisions in the Carolinas, three in North Carolina, one in South Carolina, which is where Drake works covering a 10-county radius.
Although her division was only born in February, Red Door is an established company. Drake is the first female builder in the company’s history.
And Red Door was the one on the pursing end of hiring her, reaching out while she was still in school at Horry-Georgetown Technical College in Conway, South Carolina where she studied Construction Technology Management.
“I was kind of the right candidate at the right time,” she said. “When they hired me, I was still in school. When I was in school, I obtained an internship with Great Southern Homes which is a production builder on the east coast. I was part of their coastal division, worked with them the entire time I was in school where I also had a cumulative GPA of 4.0 and was president of the civil engineering club.
“A couple of my co-workers ended up going to Red Door because they moved and Red Door came to me and offered me the position. They don’t normally implement part-time workers at all, but they made the exception because they knew as soon as I got out of school I would get scooped up by another builder.
“With Red Door, we subcontract everything out so I’m actually the only Red Door employee that ever hits the job site. We call ourselves builders, but project manager or superintendent is technically what I am.” 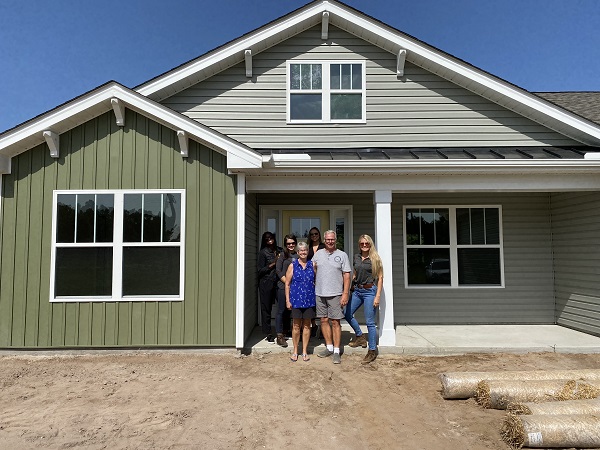 Drake, or “Barbie the Builder” as some of her homeowners affectionately refer to her as, may not necessarily be the one on site with a hammer or a paint brush but she is the one making sure the trade contractor that does the hammering or painting is hired. She’s the one ordering the supplies, dealing with vendors and setting up the inspections and making sure the final touches meet her standards and everything is exactly what the homeowner wants.
“Being a female, maybe there is more attention to detail when it comes to the framing and I have a really good build time,” Drake said. With custom building, they are looking at six to eight months but the custom builder I’m with now, I just finished three houses last month and my build time was four months.
“I think since I came from production building, I’m just used to that snap fast-paced time. I think it’s communication and persistence.”
None of that means Drake doesn’t know her way around some power tools. In fact, she enjoys getting out the brad nailer when the opportunity presents itself.
“I try to keep the tools in the truck,” she said. My rule of thumb is that I try to get my trades (trade contractors) to correct anything because I think that is also good trade training. It might be a pain in the butt to get them to drive 30 minutes to fix one little thing that I could have fixed myself but they will remember that the next time they are on one of my jobs they will be like, ‘Victoria made me come back to fix this.’
“But I will pull out the brad nailer and fix some trim, that’s something I enjoy doing.” 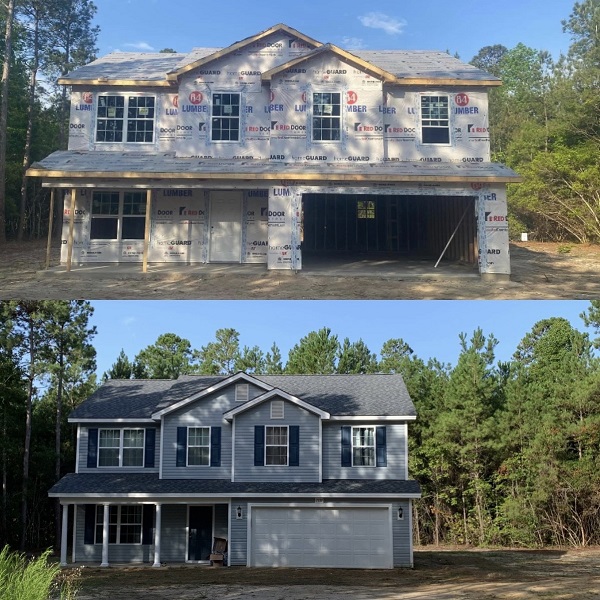 It’s that kind of attention to detail that has helped make her a hit with her homeowners.
“I love my homeowners and when they get to know me and realize I know what I am doing they love me as well. I’m keen on communication. A lot of builders are like, ‘Stand back and let me build your house.’
“I’m building for two single women right now who don’t understand a lot about construction and they really appreciate it that I look at it as if I was in their shoes. I walk them through it and really give them the details of what’s going on so they can understand.”
Drake moved to Bridgeport prior to the start of her sophomore year of high school after growing up in Burnsville in Braxton County and that’s where the roots to her career as a builder can be traced.
“Being from Braxton County, my grandfather is a general contractor,” she said. “We had a farm with barns so I grew up building barns and woodworking. Being from Braxton County, I’ve always hunted and fished. I was always very tomboyish so it kind of comes natural even if I do look very girly. People have always said, ‘You look so girly, but you are kind of like a guy.’”
While at BHS, Drake thought she wanted to go into the medical field, specifically as an anesthesiologist. Although life had different plans as her attraction to the construction world would lead to her current career, she credits the experience of being a student at BHS as being instrumental.
“I really do commend Bridgeport because I do believe I am as organized as I am because of that school. Bridgeport is almost like a college prep school. I graduated in 2015 but I didn’t go back to school until 2-19. There were four years where I wasn’t in school at all. When I went back, I could see people struggling but I really wasn’t at all because of what Bridgeport prepares you for.”
Drake also said the landing of the internship while being in college was crucial to where she is at now because it allowed her take what she was learning and apply it in the field simultaneously.
Her first completed home came with that internship with Great Southern about a year ago and it was as rewarding as one can imagine. Also, likely the first real step in realizing her role in turning a house into somebody’s home. 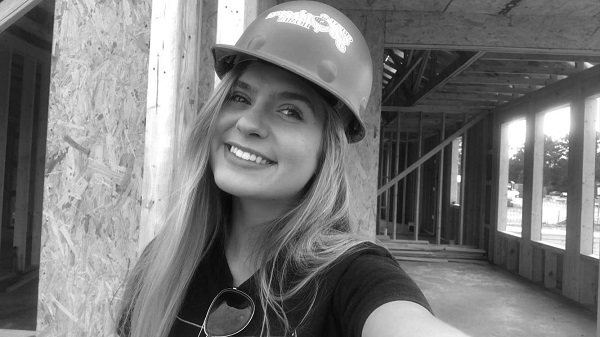 “I just closed three houses last month, two of the three were family,” Drake said. “One was the Mom and Dad. The other was their daughter and her husband. This was a job I had taken over from another builder so the foundation was already in.
“I realized I couldn’t fix the relationship between the homeowners and Red Door but I could develop a good relationship between Barbie and the homeowners. They are the ones that call me Barbie the Builder.
“At the end they ended up sending in a survey review about me and they said they really appreciated everything Red Door did. But it was really me and I made them feel so involved in the process that it didn’t feel like it was a house being built for them but we together built their home. That is the nicest compliment I’ve ever gotten.”
Currently, Drake has 11 houses under construction in her 10 counties. Five just started last month. She has already received one raise has been told another one is coming on Oct. 12 and is already in a mentoring position for two new Red Door hires.
And if in addition to helping a dream home become a reality for a family she also helps spread the word that anything boys can do, girls can do too, then all the better.
“My advice is to not second guess yourself,” Drake said. “You can do it. I’ve always been around building but never thought of it as a career option because of thinking it’s not something you see girls out there doing. But if you put yourself out there, you can do it no matter your demographic, your age or your gender.”
Editor's Note: Submitted photos. Top and bottom photos of  Victoria Drake aka "Barbie the Builder" Second photo features Drake with some happy new homeowners, third photo is a before and after shot of one of the houses she has built.