When the rains came last week, it appeared that the annual Wayne Jamison-Mary A. Reppert Scholarship Golf Tournament at the Bridgeport Country Club may put an early end to things. But has generally been the case through the year, even a grumpy Mother Nature decided to cooperate.
In the end, organizer and “Voice of the Indians” Travis Jones said everyone was able to get in 18 holes and complete a full day of golf. The 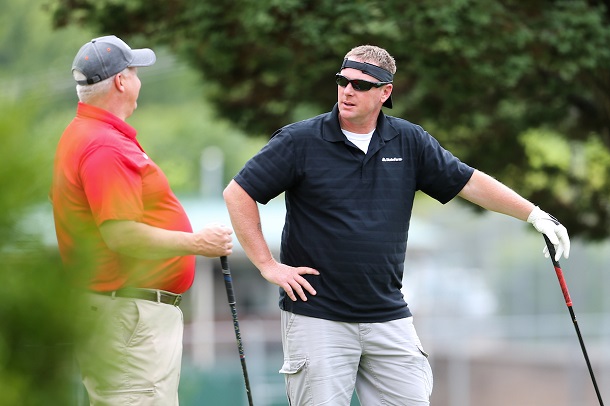 full day also didn’t end when the golfing ended as a silent auction was held as well as the annual steak dinner with meats provided by Young and Stout.
The fact that the weather broke was good news for more than just getting the tournament in. The break in the weather allowed the tournament to have a record field complete the event.
Jones said there were 103 golfers involved. He said that is the maximum that could be handled during the event.
While the focus of the event is to have a good time, talk football with the Bridgeport High School coaching staff and raise funds for scholarships in memory of Jamison and Reppert, golf is also taken seriously. And for at least a year one group has bragging rights.
The foursome of Chad Reppert, Ryan Compton, John Julian and Jim Evans were the winners of this year’s tournament. Jones said the group finished with a score of 15-under.
This year's Mary Reppert Scholarship winner was Jake Bowen. Owen Henline was the recipient of the Wayne Jamison Scholarship.
Editor's Note: Photo by Joey Signorelli of www.benqueenphotography.com.