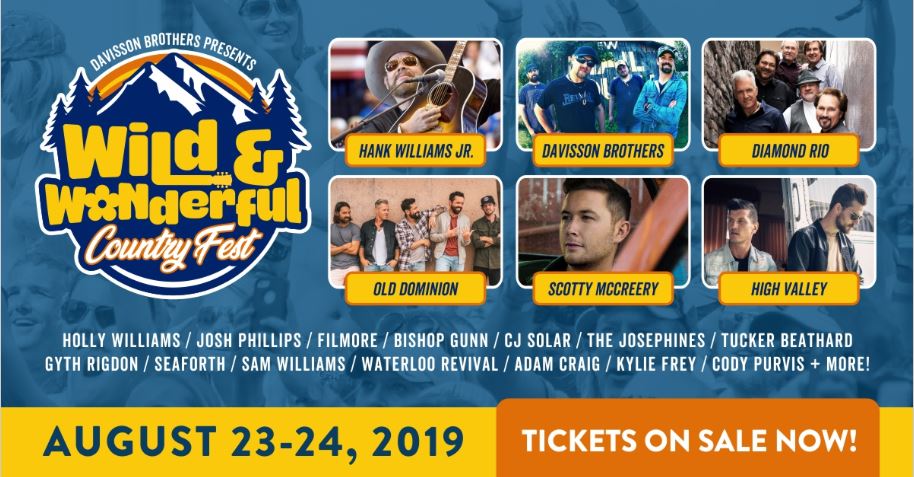 Brought to you by local heroes The Davisson Brothers Band and the team behind the Carolina Country Music Fest, West Virginia’s WILD & WONDERFUL COUNTRY FEST takes place Aug. 23-24 at Mylan Park in Morgantown.
Alongside headliners HANK WILLIAMS JR. and OLD DOMINION, the inaugural 2019 event will host more than 15 other artists, spread out over multiple stages and hosted by the THE DAVISSON BROTHERS BAND themselves.
West Virginia, featured performers include DIAMOND RIO, HIGH VALLEY, SCOTTY MCCREERY, HOLLY WILLIAMS and TUCKER BEATHARD, plus rising stars like ADAM CRAIG, SEAFORTH, FILMORE and WATERLOO REVIVAL.
Exciting new talents like JOSH PHILLIPS, BISHOP GUNN, CJ SOLAR, THE JOSEPHINES, SAM WILLIAMS, GYTH RIGDON, CODY PURVIS and KYLIE FREY will also be highlighted on the first WWCF bill, along with a wide range of activities meant to combine the authentic Appalachian culture of West Virginia with the best in country music.

“We are super excited to bring this event to the great state of West Virginia. It’s an honor to be on the ground level of bringing the fans a meaningful experience they can look forward to every year.  To us…it’s one big family union. We travel on tour regularly, and are always longing for home. Wild and Wonderful Fest is our way of celebrating and showing the world what West Virginia is all about. We take pride in where we come from and are looking forward to showcasing our home, music and lifestyle.”
In addition to two full days of music, festival attendees can enjoy a real life “Holler” in the middle of the action – complete with a George Dickel Front Porch Pickin’ Stage. Designed to recreate The Davisson Brothers Band’s actual musical upbringing, fans are invited to pick along with The Davisson Brothers’ family and friends during informal jam sessions throughout the fun-focused event.
Fans who visit the Holler can learn about Native American music and culture from JIM BEER and his Family Band, who will perform drum and flute presentations and lead Q&A sessions with the crowd. Likewise, longtime Davisson family friend and West Virginia folk legend MIKE MORNINGSTAR will be on hand to deliver multiple sets of original songs with his homemade Hickory Stick, and discuss his lifelong passions as a master woodsman and gardener. Both performers can be seen in The Davisson Brothers “Po’ Boyz” video.
Fly Fishing pro CURTIS FLEMING of Bridgeport will be on hand to offer fans fly-tying tutorials as part of his hit TV show, Fly Rod Chronicles, and West Virginian old-time guitar and mandolin masters JOHNNY STAATS and ROBERT SHAFER will memorize attendees with lightning-fast playing and celebrated storytelling. And as if that’s not enough of what makes West Virginia so Wild & Wonderful, the festival will also feature archery, axe throwing, turkey-call lessons and a Pepperoni Roll Cook Off (a longtime local favorite) – plus a Moonshine Speakeasy showcasing the area’s best homemade whiskey and a Late Night Jam Stage to keep the good times going long after dark.
Ticket packages for the WILD & WONDERFUL COUNTRY FEST are on sale now, and more information can be found at wildandwonderfulcountryfest.com.
ABOUT THE DAVISSON BROTHERS BAND:
Founded in Clarksburg, West Virginia, The Davisson Brothers Band is a contemporary country foursome featuring real life siblings Donnie Davisson (vocals) and Chris Davisson (guitars), plus bass player Russell Rupert and drummer Aaron Regester. Featuring an authentic country sound rooted in time-honored Appalachian tradition and infused with smooth Southern-rock energy, the band made their Top 40 Billboard Country Album debut in 2009 with the self-titled Davisson Brothers Band. After establishing themselves on tour around the nation with acts like Chris Janson, plus a writing credit on the theme song to ESPN’s Baseball Tonight, the band released the reflective single “Jesse James” in 2015, which was played extensively on SiriusXM’s The Highway. Grammy winner Keith Stegall (Alan Jackson, Zac Brown Band) produced the band’s 2018 sophomore album, Fighter, which featured the work-hard-play-harder anthem “Po’ Boyz.” The Davisson Brothers Band was invited to perform at Australia’s CMC Rocks Festival in 2018 and made their Grand Ole Opry debut in February of 2019, continuing to rack up both miles and accolades.
ABOUT CAROLINA COUNTRY MUSIC FEST:
Founded by entertainment entrepreneur Bob Durkin in 2015, the Carolina Country Music Fest has grown from a regional celebration into one of the top festivals in the United States. Annually drawing over 30,000 fans to Myrtle Beach, South Carolina, and generating more than $100 million for the local economy, Billboard lists the Carolina Country Music Fest as the #4 country festival in nation, while Parade named it the #6 festival regardless of genre – the only country festival to make the list. Filled with local flavor and delivering a massive positive impact on an underserved community, the festival helps fund over 200 charities each year, leads outreach to area Veterans and donates directly to music programs in local high schools through its #CCMFBeKind initiative, leading mayor Brenda Bethune to deliver an official proclamation celebrating the festival’s impact in 2019. Recent years have featured dozens of current country hitmakers and legends alike, including Alabama, Luke Bryan, Tim McGraw, Keith Urban, Jason Aldean, Florida Georgia Line, Dierks Bentley, Toby Keith, Maren Morris, Thomas Rhett, Dan + Shay and more, with plans in motion to keep the event growing. “If anybody wants to know what we plan on doing, what we can do and will deliver with the Wild & Wonderful Country Fest, the Carolina Country Music Fest is the litmus test of what we aspire to be in West Virginia,” says Durkin.