A Cars and Coffee event is not a typical car show, but rather a venue that provides a social gathering for automotive enthusiasts to hang out and enjoy cars and conversation. Starting at 6:00 p.m. on Friday, July 29, attendees can expect to walk with other car lovers among over 50 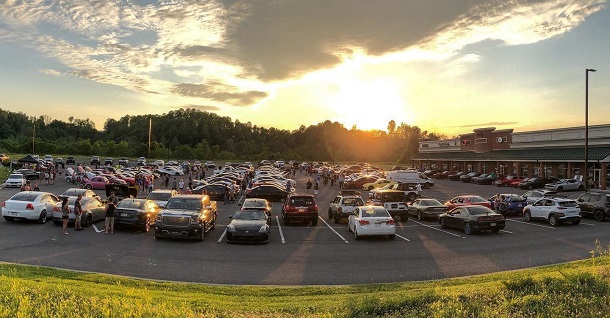 novelty and performance automobiles. Following the meet-up a screening of the Nicolas Cage-led action thriller Gone in 60 Seconds will show at 8:00 p.m. on the Robinson Grand’s big screen.

“We are confident this is going to be Clarksburg’s premier summer automotive event,” said Jason A Young, the Robinson Grand’s consulting program manager. “It’s about as unique as you can get: the perfect synergy of cars, community, and [Nicolas] Cage.”

In exchange for the life of his little brother Kip (Giovanni Ribisi), the reformed car thief, Randall “Memphis” Raines (Nicolas Cage), has to do the impossible: In less than three days, he has to steal not one, but fifty exotic supercars for the ruthless crime lord Ray Calitri (Christopher Eccleston). To stand a chance of pulling off this intricate and time-sensitive grand theft auto, once more, Memphis has to rely on his old gang: his knowledgeable mentor, Otto (Robert Duvall); his old friends, Sphinx (Vinnie Jones) and Donny (Chi McBride); his reluctant ex-girlfriend, Sway (Angelina Jolie); and a band of tech-savvy young thieves. However, the police are on to them before the thefts even begin. Fast Lamborghinis, precious Ferraris, luxurious Porsches, and “Eleanor,” a rare Ford Shelby Mustang GT500, are just some of the cars in Raines’ long list. Can Memphis execute the perfect car heist?

“What better way to celebrate the automotive culture in our area than having the Robinson Grand team up with Cars and Coffee to host a night of awesome automobiles – in person and on the big screen?” said Steven Baczuk, from NCWV Cars and Coffee. “And what better movie than Gone in 60 Seconds, which spawned one of the most iconic cars of our generation, the Eleanor Mustang?”

Anyone can bring a car to the meet-up. NCWV Cars and Coffee has an interest in modern performance vehicles but welcomes classics and everything unique. Participants are asked to bring a clean, show-worthy vehicle and respect each other’s property and space while at the meet-up.

“Come enjoy a gathering of our local cars, then let’s watch one of the best car movies of our generation,” said Baczuk.

The Robinson Grand Performing Arts Center is one of West Virginia's premier performance venues. A recent $15 million renovation has transformed our beautiful historic local theater into one the state's most spectacular small theater destinations in which to experience an event. Preserving the distinct historical charm of the 1913 theater, the Robinson Grand boasts the most modern updates and conveniences of any local performance venue. The comfortable 1,000-seat size of the theater makes every seat feel intimately connected with the onstage performance.