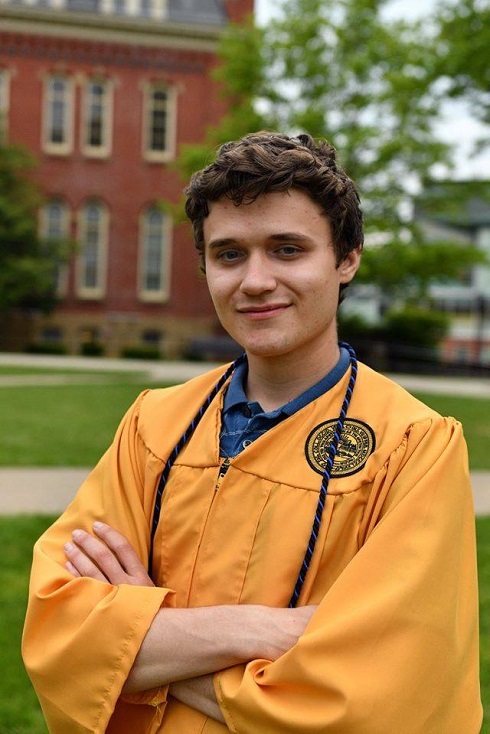 This time last year, BHS alum Douglas Soule was living in Washington, D.C., the only West Virginia student to be selected for the prestigious Politico Journalism Institute.  One month ago, he was participating in the first virtual graduation ceremony ever held at West Virginia University, named as a WVU Foundation Outstanding Senior and as one of three of the Reed College of Media’s Top Overall Scholars, as well as Outstanding Journalism Senior.  Last week, he began a new chapter as a journalist for Mountain State Spotlight, a new nonprofit news source in West Virginia where his expertise as a Report for America corps member will be utilized.
That timeline is representative of Soule’s impressive dedication to his journalistic endeavors since graduating from Bridgeport High School in 2017.  After interning with the Daily Athenaeum prior to his freshman year at WVU, Soule was named Editor-in-Chief of the publication in 2018, serving in the position for two years.
The independent student newspaper proved to be a defining experience for Soule, honing his skills, expanding his knowledge, and forging professional relationships.  Under his leadership, the DA team expanded, readership grew and the newspaper developed a digital focus that allowed opportunities for him and his team to pursue breaking news and investigative stories.
When COVID-19 caused WVU students to work remotely, Soule and his team embraced the challenge and reported from various locations around the country for the remainder of the semester. The tenacity required to cover the ever-changing events was matched only by the flexibility of the team as they navigated new journalistic territory.
Upon graduating, Soule began his new position at Mountain State Spotlight. The non-profit news source seeks to help West Virginians improve their state by producing “sustained outrage” journalism that exposes abuses of power by government, businesses and other institutions.  The independent, civic news organization will tell stories of importance to citizens of the Mountain State about issues and challenges facing their communities.
“I am beyond excited to work with Mountain State Spotlight,” Soule said. “I will have the opportunity to be a part of a team of experienced editors and reporters who will be producing journalism that inspires positive changes, explores complex issues, and gives a voice to those who might otherwise go unheard.”
The Mountain State Spotlight website will begin publishing late summer, focusing on major issues such as public health threats, economic development challenges, environmental issues and government accountability.  The new venture is led by Greg Moore, former executive editor at the Charleston Gazette-Mail and Ken Ward, Jr., a MacArthur Foundation “Genius” Grant winner for his longtime work covering polluting industries.
“Through this position, I look forward to making a difference in th lives of West Virginians through investigative reporting,” Soule said. “Being a part of such a groundbreaking journalistic organization is exciting and challenging and I am honored to be among those reporting for it.”