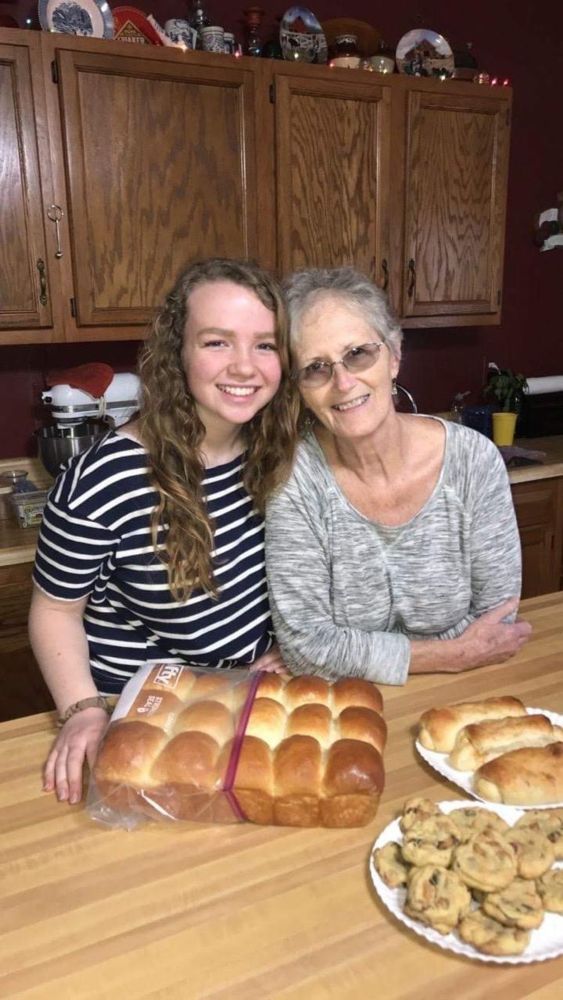 Memories are funny. They seem so individual and personal, but sometimes, they connect hundreds of strangers who have had similar experiences.  When BHS alumnus Laurel Muhly-Alexander put pen to paper to write about her time with her “Grammy,” the words that spilled out were ones of connectivity, of warmth, and of the kind of adult every child deserves to have in his or her life.
Muhley’s poem, “Gram’s Kitchen,” was recently published in Goldenseal, the magazine that features the best of Appalachia.  Upon her initial submission, she was told the magazine doesn’t usually publish poetry, but hers was such a universal feeling, the editor deemed it a perfect fit.
Mary Ann Shaver is Gram in the poem.  Although not an actual grandmother to Muhly-Alexander, Shaver’s unconditional love and support gave her the honorary title of Grammy.  It was her hands that made the warm chocolate chip cookies and the fresh hot rolls.  It was her kindness that encouraged the children she babysat to be their best selves. And it was through her that Muhly-Alexander and countless other children felt safe and loved.
Muhly-Alexander originally wrote the poem when she was in Amy Lohmann’s Advanced Placement Literature Class at Bridgeport High School.  Since it had a distinctive Appalachian vibe to it, her parents encouraged her to submit it for publication in Goldenseal, the iconic West Virginia magazine.
“Mary Ann was more than a babysitter and Sunday School teacher,” said Muhly-Alexander.  “She was like a third grandmother and she loves so unconditionally and demonstrates the kind of humor and understanding people work their whole lives to have.”
Being at Shaver’s house brought out the best in children.  Normally picky eaters and restless sleepers, she had a way of calming them down and making every day an adventure.  In short, her home made the children feel at home.
When Muhly-Alexander’s family relocated to Bridgeport, she made an extra effort to stay connected with Shaver, driving back to the kitchen reflected in the poem, and talking for hours.
“She continues to be such a huge supporter of my siblings and me,” said Muhly-Alexander.  “She always came to our recitals, plays, games and other big family moments.”
Although Muhly-Alexander has won a few writing contests, “Gram’s Kitchen” is her first published piece.  She is currently a Public Relations major at West Virginia University minoring in Appalachian Studies.
“I’m so excited that people all over West Virginia can read the poem in Goldenseal,” she said.  “It can be taken literally about one woman in Doddridge County or generalized to the welcoming kitchens of grandmothers all over Appalachia.”
The poem first featured in Goldenseal follows:
Gram’s Kitchen
The warm air of her kitchen rushes to heat my cold nose as the storm door slams shut. The aromas of Bread dough and cookies leap off the ceiling fan and Dance their way up my nostrils. I breathe in Deep, knowing I am home.
Outside the snow blankets the cow Pastures, freezing water pipes and country roads. On Sunday afternoon, school the
Next morning is a nonexistent worry. I sit
At her counter and steal a cookie.
Like a Catholic in confession, I Vent to her my wrongdoings and secrets. She listens, injecting comments and Dirty jokes. Her kitchen is a place Where cackling is encouraged.
I sit at her counter and feel content With my life. I don’t think of deadlines or Responsibilities or idle tasks.
I am present with her and
I love her
On the stool I feel safe and in her
Arms I am secure. Her heart is
Built for grandchildren, nieces, the preacher’s kids, And the poor little boys that live up the Holler without food or heat.
I am one of the lucky children to sit
On her stool and feel happy. I am one of the Lucky to feel wanted by her and know of the
Selfless love, good food, and serenity That comes from four small walls.