Indoor Recreation Complex Gets Its Name — The Bridge Sports Complex 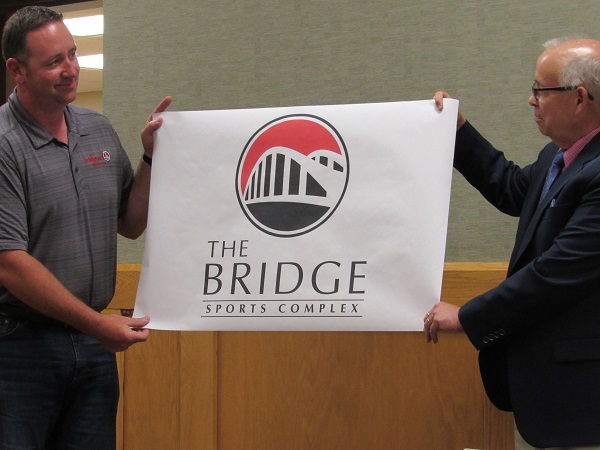 The name of the Bridgeport Indoor Sports and Recreation Complex was unveiled during Monday's City Council meeting.
The facility which is on target to open in the spring of 2021 will be called The Bridge Sports Complex.
The name as well as the logo were presented by Parks and Recreation Director Joe Shuttleworth and City Manager Randy Wetmore.
"It's official and it's out there," Wetmore said. "I think we are pretty happy with the way it looks."
Shuttleworth said the City and the SFM (Sports Facilities Management) marketing team worked together to come up with the name and logo and the end result is something he likes.
"Not only do you have the name but we used some local flare with the Bowstring Bridge, kind of as the guiding priniciple for the logo itself," Shuttleworth said. "If you look up the definition of a bridge, you are going from one area to another and connections. There are a lot of ways you can spin that from connecting the community to sports, connecting whatever you want, economic development, bridging the gap between the needs and wants of the community. There is a lot more to it than just the bridge being part of Bridgeport."
Prior to announcing the name Wetmore provided an update on the management side of The Bridge Sports Complex, stating that SFM was still conducting interviews for the General Manager and operations person.
"We're getting closer," Wetmore said. "It's taking longer than we had hoped but we are making progress and are hoping to get them here by August."
As part of the new business on the agenda for the meeting, Council approved the May payment of $1,796,752.80 to the Albert M. Higley Company out of Cleveland for ongoing construction work at the indoor complex.
The percentage of completed work on the complex is now at 44.08 percent according to Council.