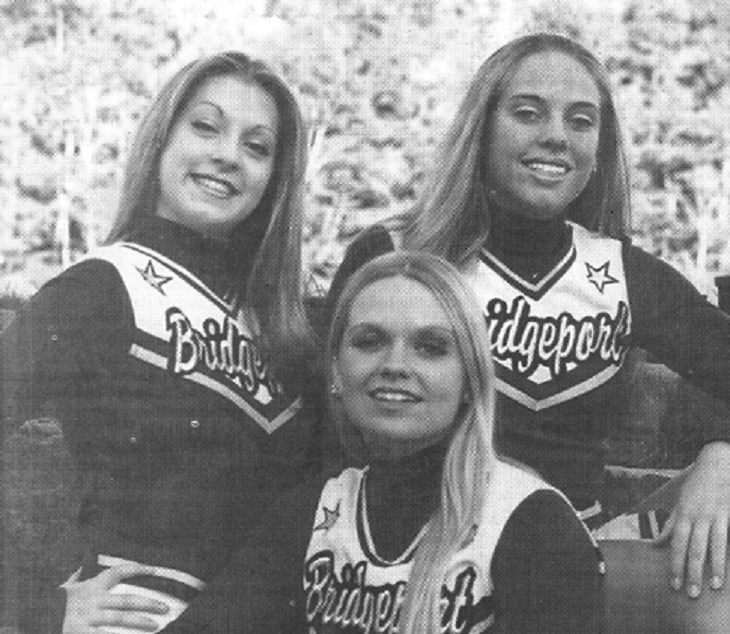 Remember these young ladies? This trio of Bridgeport cheerleaders were chosen as members of the 2001 All-Big 10 Conference squad. In the front is Deanna Perine and in the back is Michelle Mantooth and Lindsay Miller.

Although they haven't had a football team since the late 1980s, for decades Salem College sporte a program. This photo goes all the way back to 1921 when the team finished 6-1 with a lose to Marshall College. Although the names of the players shown aren't known, here are some of the position players. Left tackle Clarence "Bud" Tesh, left guard Robert "Toughy" Russell, left end Albert Croy, left halfback Ray "Jack" Jackson, right tackle Paul Bond, right guard  Edward "Ed" Davis, right end Boone "Proud" Proudfoot, right halfback Charles "Duffy" Bates, center Harold "Nick" Ferron, quarterback Earl "Juicy" Culp, and fullback Donald "Doc" Nance. Apprarently to play for Coach Francis L. Casey's squad you had to have a nickname. Can anyone identify any of the players? If so, add in the comment section below.
Editor's Note: This ongoing photo feature of pictures from Bridgeport and throughout the Mountain State is part of local historian Richard "Dick" Duez's collection. Duez, the unofficial historian of Bridgeport, would appreciate any scanned photos emailed to him for use here or to include in his ongoing efforts to preserve local history. You can email photos, or let him know how to acquire copies of photos you may have in your possession, to Duez at dick.do@frontier.com.