Time Travel: City Businessman Readies for a Unique 1954 Parade and Construction of UHC in the 1970s 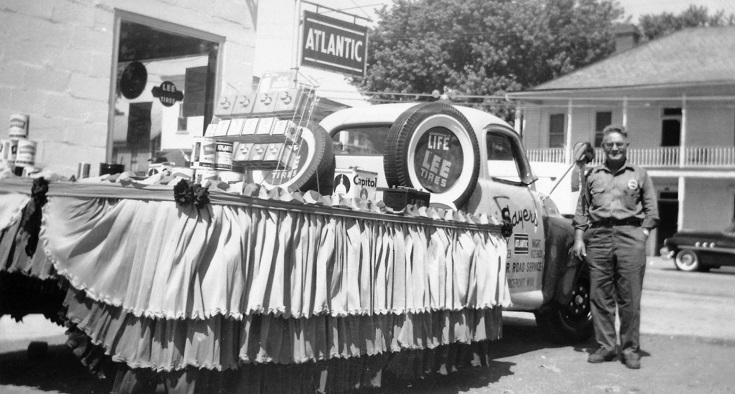 Sayers Gas Station used to be located on West Main Street in Bridgeport across from the present day Dairy Queen. This photo shows Mr. Sayers, the owner, getting ready for the night parade scheduled for Oct. 8, 1954. The parade was being held celebrating the lighting of the new mercury-vapor street lights installed by Mon Power. A newspaper article on the event claims that 5,000 people attended the event and then took part in a community square dance afterwards.

If you can't make out the sing, then you may be able to make out the building, which still stands today. This photo, believed to be from 1974, shows the construction of United Hospital Center. UHC is no longer at the location as it has since moved to Bridgeport off of Jerry Dove Drive and Interstate 79. Today, Highland-Clarksburg Hospital operates in a large part of the facility.
Editor's Note: This ongoing photo feature of pictures from Bridgeport and throughout the Mountain State is part of local historian Richard "Dick" Duez's collection, the unofficial historian of Bridgeport, would appreciate any scanned photos emailed to him for use here or to include in his ongoing efforts Duez to preserve local history. You can email photos, or let him know how to acquire copies of photos you may have in your possession, to Duez at dickdo@citynet.net.