A Witch's Grave at Bridgeport Cemetery? History or Fly-By-Night Tale .. Which is it?

For years – especially during the Halloween season – there have been tales flying around town that there is a witch’s grave at Bridgeport Cemetery. 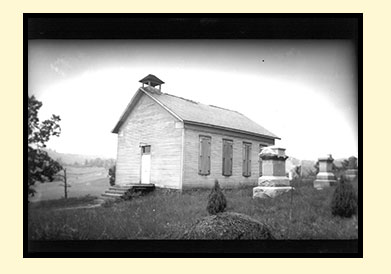 The truth, said Cemetery Superintendent Kitty Sapp, is that under an unmarked grave lies Rhoda Ward, who in January of 1787 was tried on charges of witchcraft.
But here’s the twist: Ward was never convicted.
“She was really sick and fevered and she was accused of being a witch because someone said she was spewing up crooked pins,” Sapp said.
It was the chicken pox with which Ward suffered. During her trial, she delivered a sworn statement in her defense about throwing up the pins. That statement – which has been documented – reads in part:
“If I did, I knowed it not, though it might be the case, and if the pins had not been showed to me, and I have been told that I spewed them up, I should have thought that the above had been a fiction, proceeding from being light-headed with fever.”
Twelve years later, Ward went to trial for a second time and was again found innocent by a church-appointed committee. Again, there was no punishment and again, she was allowed to continue her membership with Simpson Creek Baptist Church. 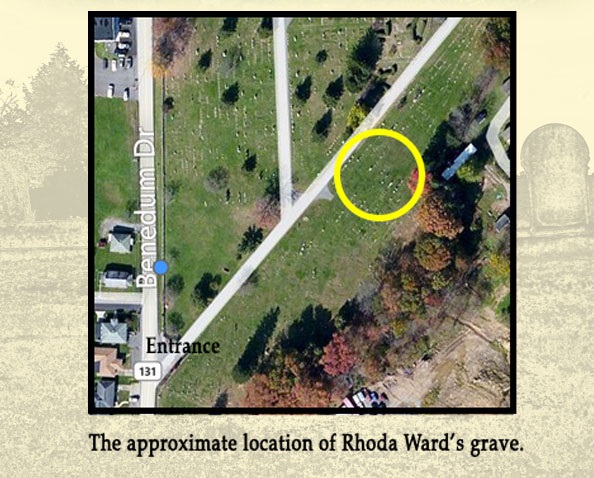 Although she was never convicted of witchcraft - nor burned at the stake, as some versions of the story go – Ward’s notoriety has continued for more than 200 years.
“She still has that stigma of being a witch, even though she was not found guilty,” said Joe Shuttleworth, deputy director for Bridgeport Parks and Recreation.
The city department receives inquiries about the grave site, especially from local student groups which tour the city, which always include a stop at Bridgeport Cemetery.
Sapp said she gets plenty of questions about it, too.
“People usually want to know where it is,” she said. “And that’s in the old baptist section of the cemetery.”
Individuals are also interested in how and when Ward died, but to Sapp’s knowledge, there are no records indicating that information. There is also no record in the Bridgeport Cemetery archives about Ward’s burial.
Legend has it, however, that she’s in a grave site marked off with a concrete barrier.
A Bridgeport Public Works employee, Richard Sparks cannot confirm that Ward lies in the grave, but he does have first-hand information about why the entire grave is filled with concrete. 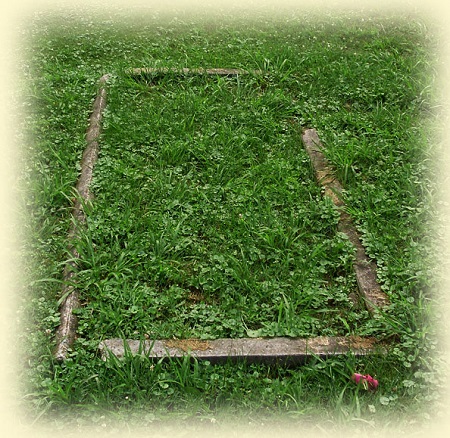 “It was close to 15 years ago,” he said. “I was working at the cemetery and we were filling in the grave - where they said the witch was buried – with dirt. Every time we put dirt in it, it disappeared. It just kept sinking in,” he said.
The cemetery superintendent at the time decided to fill it with concrete, so that’s what a crew of workers, including Sparks, did.
“We put a little flower bed around it to mark it,” he said.
Through the years, Ward and her story have occasionally surfaced. Among the most memorable is the 1970 tornado that ripped through the city, supposedly winding up at Bridgeport Cemetery – but not before doing significant damage to Simpson Creek Baptist Church.
So is it all just a fly-by-night tall tale? The jury is still out on that one, but Sapp has a creeping suspicion there just might be something to it.
“I wouldn’t be surprised if that witch is walking around in spirit,” she said.
A few years back, there was an occurrence in the cemetery office which Sapp thinks may have been the handiwork of Ward.
“It was around 4 p.m. and I was sitting in my office waiting on an appointment,” she said. “There was no clock on the wall so I walked into the main office to see what time it was. The second hand was working ok, but the minute hand was flying around and around the clock.”
The phenomenon went on for 30 seconds or so and then the minute hand landed at precisely 4:03 p.m. – the correct time.
“It stopped at the exact right time. What made it do that?” Sapp asked. “Maybe it’s that spirit and energy. It makes me wonder.”

When I was a boy, 15-20 years ago, I remember the grave was just loose bricks laying on the ground.

Back in the day...say 50 years ago, the cemetery was the place to play. Army, hide and seek, trying to catch the gold fish in the little pond just down from the sales office, wading in the long pool up on top and seeing who was the least scared of the witches grave. It was a big slab of stone laying flat with a large crack so that one could see in if brave enough. As you came in it was up a ways down off to the right among a lot of very old stones and was known by all as the witches grave.

In 1787 eighteen-year-old Rhoda Ward was the recently married daughter of Baptist clergyman John Denham. John at that time was seeking a position as pastor at Simpson Creek. Meanwhile his wife, Rhoda's stepmother Gwen, had fallen into some sort of enmity with Elizabeth Stout. Harsh words were spoken, Mrs. Stout calling Gwen Denham a witch. Leading men in the church tried to persuade the two ladies to reconcile but did not succeed. This went on for some months. No one seems to have taken the witch accusation seriously.

In the midst of this Rhoda fell ill with the chicken pox and in her delirium someone gave her a packet of pins. Don't all seamstresses hold the pins in their mouths as they work? Rhoda managed to chew and half-swallow a few, and spat them up, along with some blood. The church fathers duly investigated: who had given Rhoda the pins? They weren't conducting the trial of a witch. They were trying to find and shame the culprit. Seventy years ago Rev. Bonner misinterpreted what he found in the archive, evidently. The "witch trial" story seems to originate in his history of the church. If anyone can produce a proof that the story was current in earlier times I'd be happy to see it. It's worth recalling that a church in Virginia in 1787 could not impose a punishment of any kind, beyond denying communion. The Virginia of Thomas Jefferson's day bore no resemblance to the Massachusetts of 1692, and the witch trials of Salem had been an aberration even there. I'm not saying this to spoil Halloween. David Houchin Clarksburg-Harrison Public Library