By Connect-Bridgeport Staff on February 08, 2019

FROM FAIRMONT STATE UNIVERSITY
On Thursday afternoon, Fairmont State business students took advantage of a unique opportunity to hear about industry trends and to gain insight into the job market they soon will be entering from local business leader, Larry Mazza.
“Our main goal today was to talk about love, trust and commitment. We think that it’s all about the relationship, if you don’t have that you 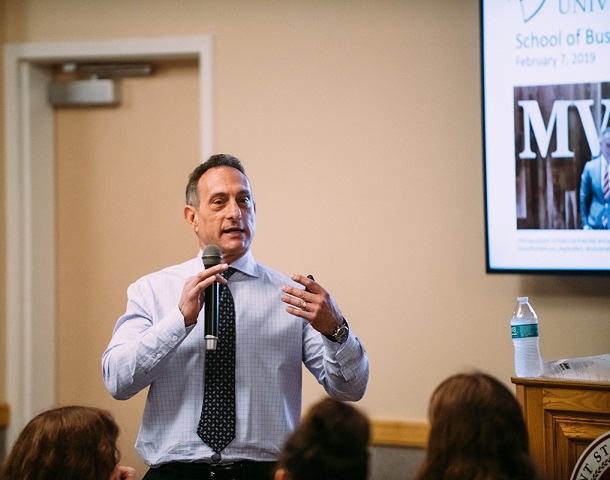 won’t be a good banker, you won’t be a good spouse, you won’t be a good player, you won’t be a good coach,” he said. “We also wanted to make sure that as part of the entrepreneurialism, that they have that stick-to-itiveness, that they stick to it when they have challenges. But they also know when to pivot and proceed, when you need to make the change, when you need to continue to go forward.”
Jim Davis, business administration program coordinator, was excited to have Mazza on campus to speak to the School of Business students to encourage and motivate them.
“I wanted them to get a sense of how things can be done locally, how they can stay in this area and get a great job with a great company and grow. They don’t have to look beyond North Central West Virginia for that,” he said. “MVB Bank is a perfect example of a local company that’s done so well, not only here in this region but also nationally and internationally.”
One thing Davis was looking for was to get local companies more involved with the students and MVB Bank was the first place he reached out to since they are headquartered locally.
Mazza is President and Chief Executive Officer of MVB Financial Corp., the parent of West Virginia-based MVB Bank, Inc. and MVB Mortgage. He is a recognized name in West Virginia banking with more than 30 years of experience in both large banks and small community banks. He also serves as a member of the West Virginia Board of Banking and Financial Institutions.
In addition to his established banking and financial services executive, entrepreneur and co-owner of a nationally-recognized sports media business, and a civic-minded volunteer, leader and Board member of public companies and non-profit organizations.
Editor's Note: Larry Mazza is shown talking with students Thursday. Photo courtesy of Fairmont State.