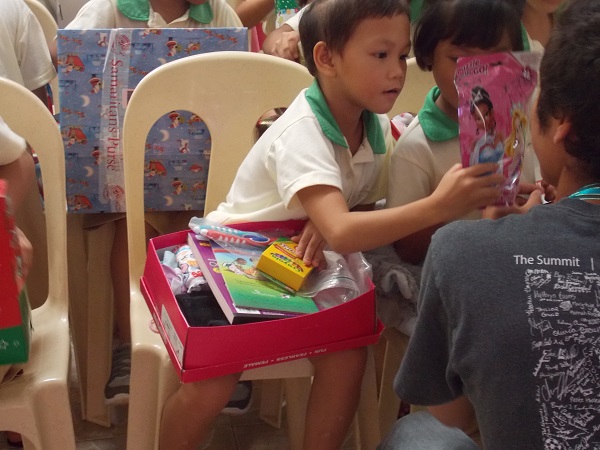 Deborah Morris celebrated Christmas in July – on the island of Luzon in the Philippines. Distributing shoeboxes for Operation Christmas Child was a week-long experience she will never forget. But there were a few moments which truly opened her eyes and touched her heart.
One was meeting Anna, the little girl who received the box of gifts personally chosen and packed by Morris.
A large carton of filled shoeboxes had been shipped to Manila for the OCC distribution, but Morris kept her eye out for the child who was meant to receive her box.
“All of the sudden a little girl turned around and gave me the biggest smile,” Morris said. “A light bulb went off in my head that this is the girl.”
Four-year-old Anna loved the dresses, school supplies and Pillow Pet – which Morris made fit by deflating its air and packing it in a sandwich bag.
“I always include toys in the boxes but for some reason, I didn’t this time,” Morris said. “But after I gave the box to Anna, I got to thinking that she should have had some toys.”

The following day, Morris experienced another one of those memorable moments when she learned about what happened after Anna received her shoebox.
“Anna lives in a boarding house. She and her best friend went to their room and shared what was in their boxes. Her friend’s was filled with nothing but toys so Anna gave her a dress and she gave Anna some toys,” Morris said. “God had something planned for that box way before I did.”
Sharing from the heart is what Operation Christmas Child is all about, said Morris, who was selected by Samaritan’s Purse as one of 20 teens nationwide to participate in Samaritan’s Purse Youth “SPY” trip.
She flew out of Pittsburgh on July 20. It was her very first flight.
“I flew to New York, where I met up with 23 others going on the trip with me; 19 kids and four adults,” Morris said. 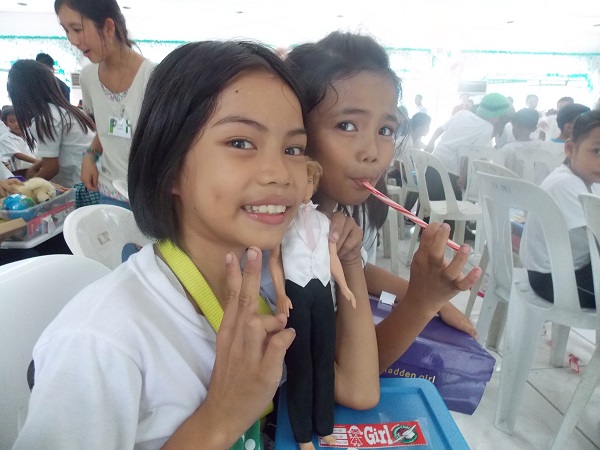 Twenty-nine hours later – by way of Tokyo – the group arrived in Manila. First they settled in their hotel and adapted to the 12-hour time difference. They were then shown around the area by representatives of Samaritan Purse’s National Leadership Team and prepared their hearts for the distribution.
“Only like five percent of the shoeboxes are distributed by volunteers so when they knew our youth team was coming, they decided early on in the year which distribution was going to be safest for us,” Morris said. “There is a high rate of crime in the Philippines, mostly pick pocketing and gangs.”
There were 13 total distributions that week; Morris took part in seven.
“We reached out to about 2,000 kids,” she said. “They took us in front of the groups of kids. The smallest group was around 50 and the largest was 300.”
Most distributions took place in churches or schools.
It was a once-in-a-lifetime experience for the children, Morris explained. 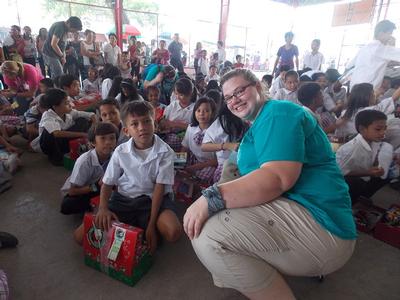 “This was the first and last time these children would get shoeboxes. Samaritan’s Purse only goes back to an area every seven to 12 years. They cycle out the kids who get the boxes so there’s no overlap,” she said.
As many boxes that are filled around the world, there’s still not enough for every child in Africa to get one.
"So they have to cycle to make sure they reach as many kids as possible," she said.
Regardless of the stories she had been told and the information she had been given about her volunteer duty, Morris said she was still not prepared for the experience.
“It’s just something you truly could never prepare for. Watching videos does not do it justice; even me telling you about it does not do it justice,” she said. “It was a very humbling experience. These kids were thanking us for what we were doing and all we were doing is something God led us to do.”
Many of the children are timid and withdrawn, probably because of things they have heard, seen and experienced, Morris said. They reacted in different ways to the gift giving.
They were appreciative and expressed that in words, saying “thank you,” even when handed a pamphlet, Morris said. Some opened their boxes in excitement to announce his or her treasures. Others held them tightly as if they were afraid they would lose them, Morris said.
“They would keep their box closed and not let anyone else look at it, but hugged it the entire time,” she said. “Some kids had smiles on their faces; others tried not to show emotion at all.”
There were some hugs – and other gestures of thankfulness.
“In the Philippines, children will take your hand and place the held hands to your forehead,” she said. “Sometimes they did that and didn’t say anything. It was really humbling just to see and feel those emotions.”
Morris and her group were up every morning by 6 a.m. and didn’t return to their rooms until 9 p.m.
“We were busy the entire time,” Morris said. “Most of our distributions took three to four hours a day and most of them were within two hours of the hotel so we spent a lot of time traveling back and forth.”
For the larger trips, the group took a charter bus. For the smaller ones, they split up and traveled in vans.
It was interesting to learn about the culture and experience foods of the region, Morris said.
“One night, we had pizza made from shrimp, calamari and all the seafood they’re able to get right at their own backdoor,” she said. “There is also a lot of Asian influence in their food. We ate a lot of rice, chicken and beef and a lot of fruit.”
When her plane landed back in Pittsburgh, Morris was greeted by her family. Her mother, Janet, asked if she was ready to go back.
“I said ‘Let’s wash my clothes and I’ll get right back on the plane,’” Morris said. “I loved it. It was such a wonderful experience. I would do it again in a heartbeat.”
The trip was humbling and changed her outlook on life, Morris said.
“It’s hard to transition back,” she said. “People in the Philippines are very gracious. They take nothing for granted and they throw away nothing because they reuse it in every possible way. This distribution really taught me how much I have and how little they have and how happy and ecstatic they are about everything.”
Morris sends a reminder that National Collection Week for Operation Christmas Child is November 18-24. For instructions on filling a box, visit http://www.samaritanspurse.org/operation-christmas-child/pack-a-shoe-box/
Fellowship Bible Church on Rt. 58, just outside of Bridgeport near Hinkle & Deegan Lakes, is the local collection center.
She encourages everyone to get involved.
“It is said that occasionally a child will not be able to go to school without the necessary school supplies that he receives in a shoebox. It could have a positive outcome with regard to an education factor. The box could make it easier for a family to come out of the cycle of poverty they are in,” Morris said. “But overall it’s just something to be able to personally touch the life of someone – a child you have never met.”
Morris is available to speak to church and organization groups. She can be reached via email at eyeluvocc13@gmail.com.
Read the June 2013 story about Morris’s selection to participate in Samaritan’s Purse Youth HERE.
Pictured top is Anna. Just above is Morris at one of the distributions. See more pictures from her trip at the gallery link below.