By Connect-Bridgeport Staff on October 13, 2021

FROM BRIDGEPORT POLICE CHIEF JOHN WALKER
More than 1 pound of meth, several grams of Fentanyl marijuana, $1,900 in U.S. Currency, and a loaded firearm was seized this morning during an early morning traffic stop at 01:50 on West Main Street. Street value of the narcotics is approximately $45,000.00. 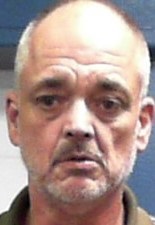 Officer Isaac Thomas initiated a traffic stop at 01:50 this morning on West Main Street.  During the traffic stop, Officer Thomas discovered and seized the narcotics from the driver’s vehicle.
Michael Eugene Stout, (61 years of age) driver, was taken into custody and is being charged with Possession with the intent to deliver.  The investigation is ongoing.
Editor's Note: Photo from West Virginia Regional Jail Website.