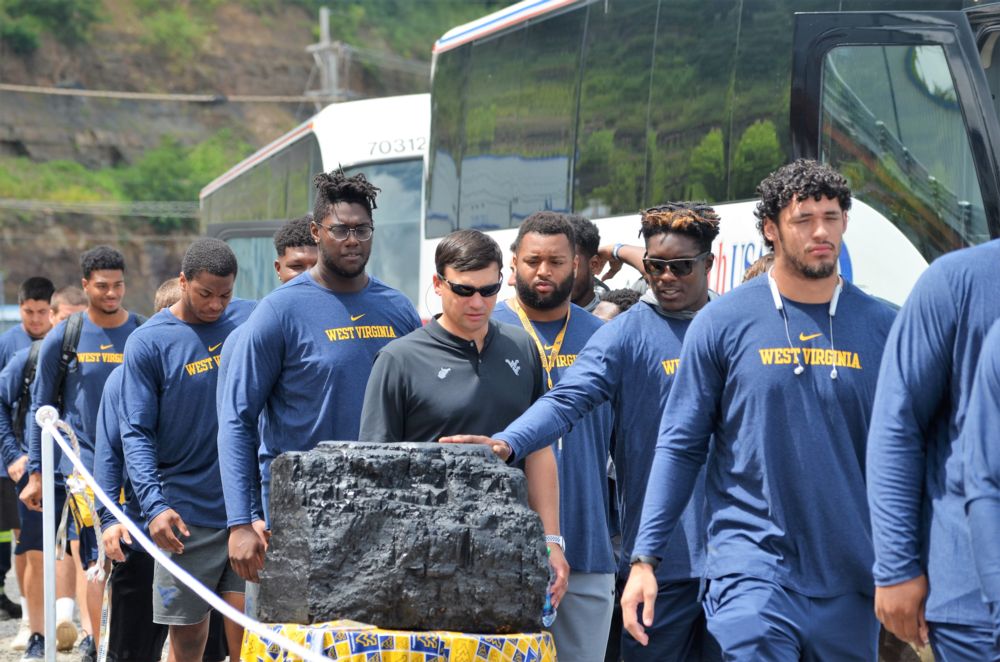 As they are accustomed to doing before home games, members of the WVU football team – one by one – walked by and touched a 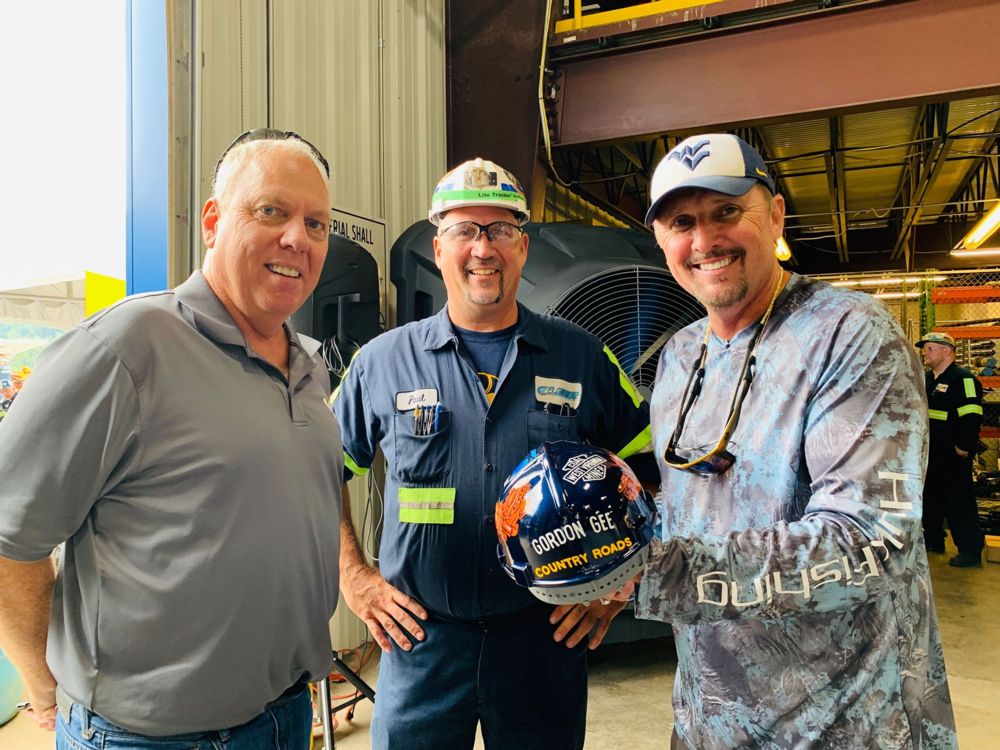 large chunk of West Virginia-mined coal.
But this time it was different.
The Mountaineers weren’t taking part in an eight-year tradition which the university adopted to pay tribute to the mining industry. They were on site at Leer Mining Complex – Arch Coal, Inc. in Grafton, seeing the facility up-close-and-personal and talking with the men who work in an industry which puts West Virginia in the top spot for leading the nation in underground coal production.
Coach Neal Brown didn’t mind that his players were getting a break from the first official week of practice for the upcoming season. He felt the experience – a collaboration between Leer Mining Complex, WVU football, major Mountaineer benefactor Steve Antoline and West Virginia fly-fishing extraordinaire Curtis Fleming - was time was well spent.
“I think it’s a tremendous opportunity for them to really connect to the fabric of our state,” he said. “You know, it’s one thing to talk about it in a meeting, but it’s another to actually get these guys on site and actually meet 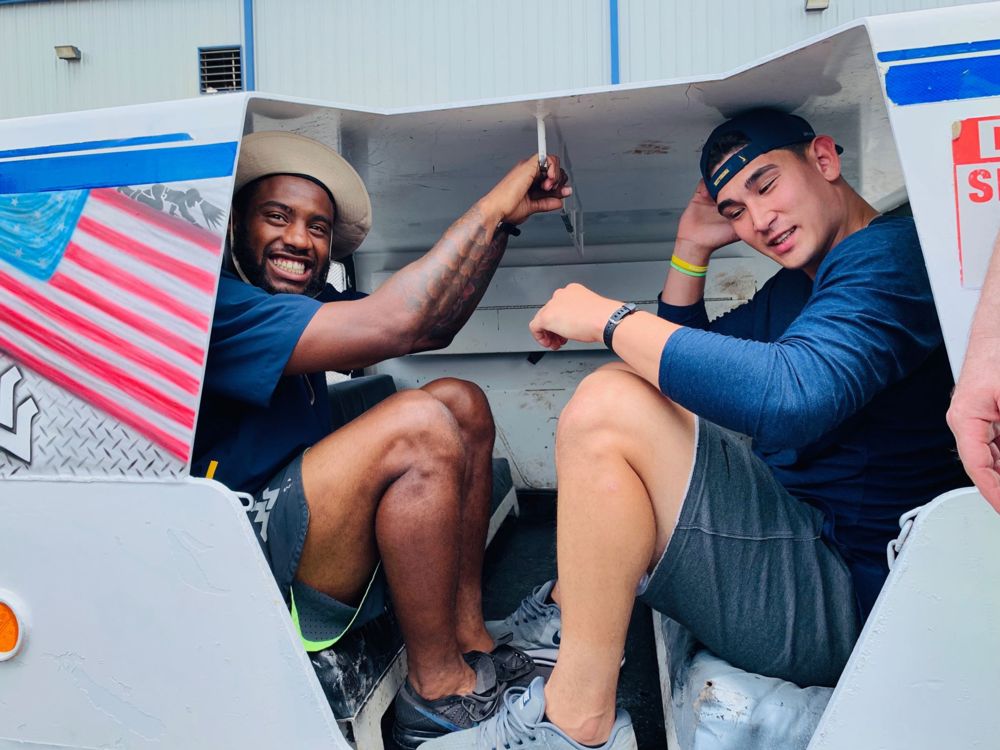 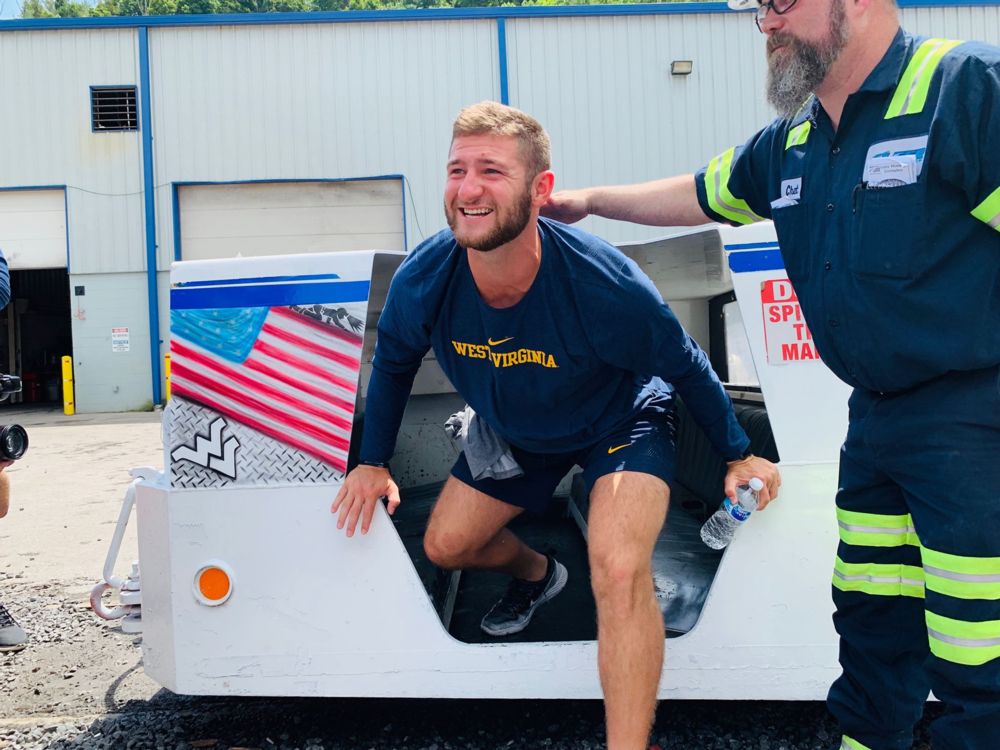 some miners and talk about what the process looks like - especially since we do the mantrip before every game. That was the thought process behind it.”
At WVU, the Mountaineer Mantrip is a ritual; one observed during the immediate hours before a home game at Milan Puskar Stadium. Led by their coach - and accompanied by the Mountaineer mascot, cheerleaders and the WVU Marching Band – the players enter Mountaineer Field.
In the coal mines, the mantrip is a shuttle which transports miners deep into the mines where they spend hours mining coal, a resource utilized for 99 percent of the state’s electricity. Eight large-sized Mountaineers at a time experienced the mantrip simulator and its very tight quarters. They were only in it a few minutes; not up to an hour which many miners travel roundtrip daily.
“If you’re from West Virginia, this hits home. This is legit,” said defensive lineman Darius Stills, a graduate of Fairmont Senior High School.
His younger brother Dante – also a Mountaineer lineman – said the tour was an eye-opening experience.
“I’ve lived In Fairmont my whole life and didn’t think a coal mine was this close,” he said.
While soaking up a mountaintop overlook 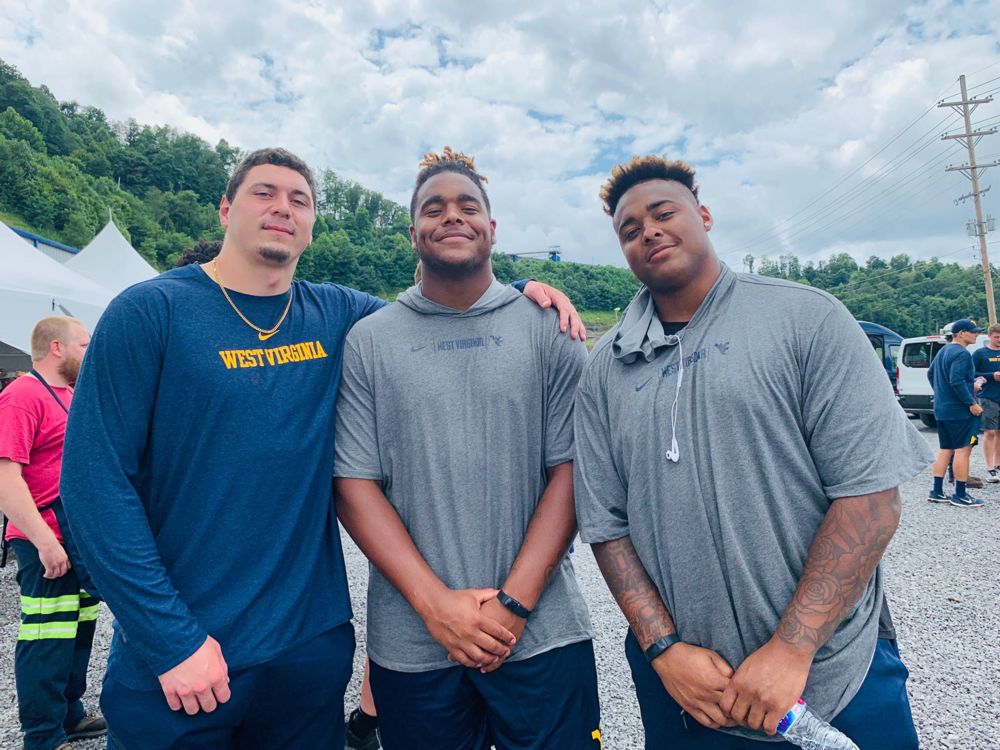 of the valley featuring acres of greenery, the coal tipple and coal train, the younger Stills brother said the view was impressive; even beautiful.
Leddie Brown agreed.
“You don’t see stuff like this in the city,” said the Philadelphia-born running back. “This all gives me appreciation for what these guys do. They are hard-working, dedicated guys.”
Fleming’s tie to Leer is his first cousin, Paul McKinney, shift supervisor.
“It’s great to see these young men come and realize what the coal miners actually do for a living – providing coal, keeping lights on – letting them see the operation,” McKinney said. 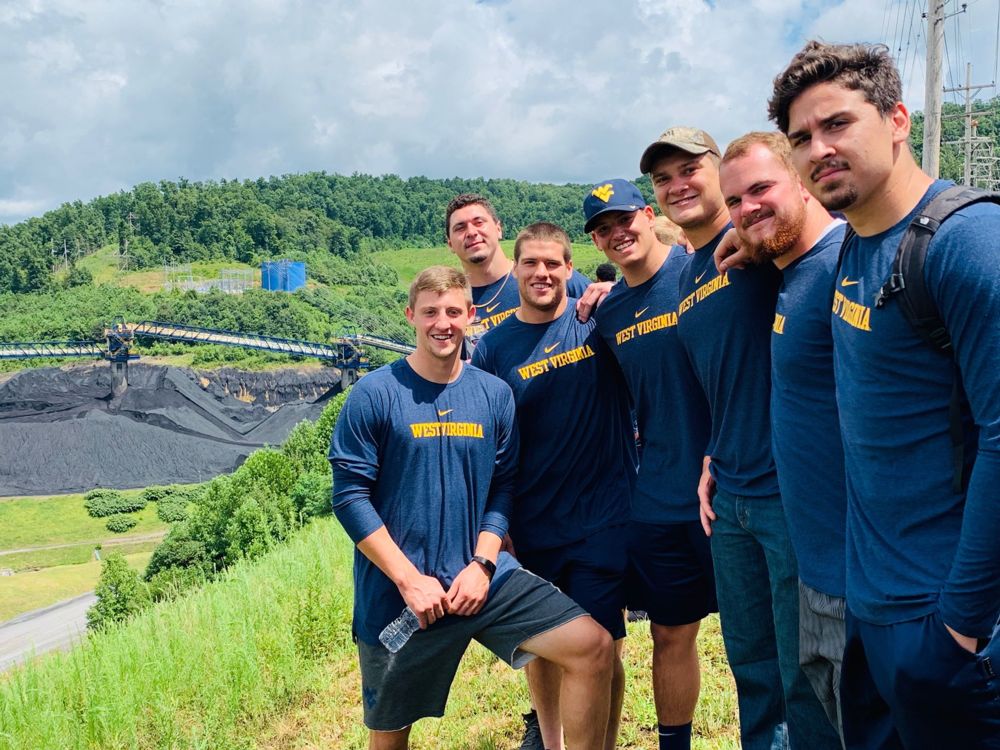 The players traveled in vans to tour the facility. They also learned how various coal mining equipment operates and talked one-on-one with the miners, giving them a better perspective and understanding of the industry.
Fleming’s tie to the industry, in general, is through a line of family members, including his dad, Bridgeport’s Sonny Fleming.
“Both my granddaddies were coal miners and so was my dad. I ended up being a coal miner for 28 years and eight months,” said the elder Fleming, who worked mines in Grant Town, Dola, Philippi and Fairmont. “And if I had to do it over again, I’d go right back there. I worked 10 to 12 hours a day and it let us raise our three boys.” 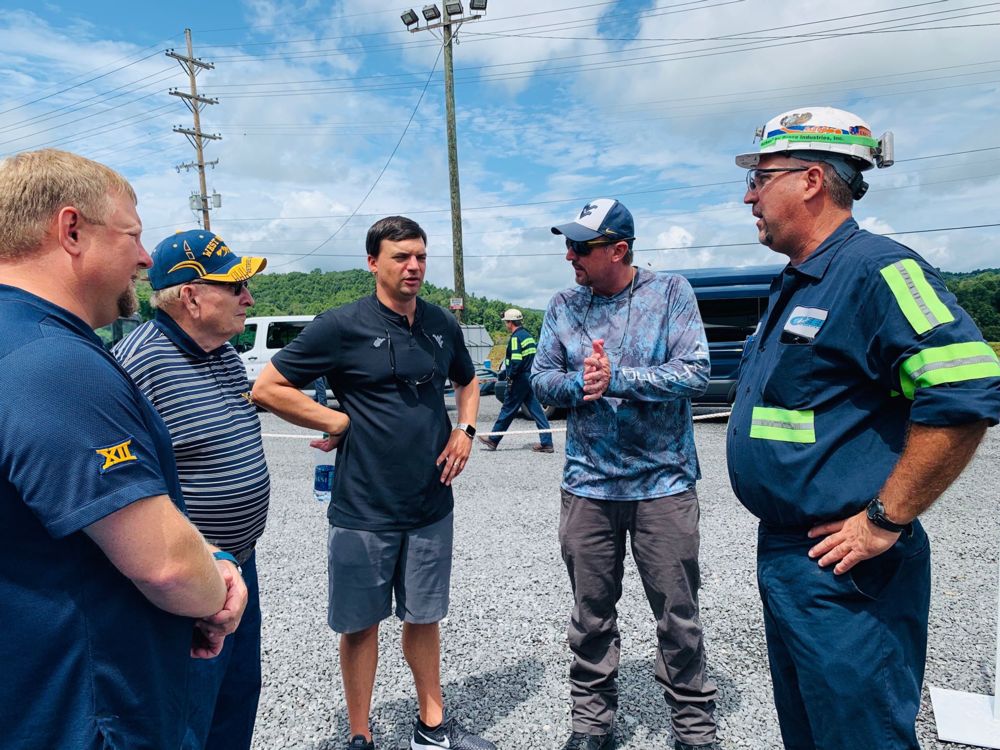 Bridgeport’s Gaither Fraser knows all about the sacrifices. General manager of Leer, he leads his miners in prayer before every shift. He takes pride in the fact that the northern Appalachia underground longwall operation – which annually produces upwards of 3 million tons of high-vol A metallurgical coal – is recognized as the safest mining facility in the state.
He also knows about the miners’ love for WVU football. When the Mountaineers play, the game is on every TV in the mine complex. Fraser said it was an honor to host the Mountaineers Wednesday.
“Our guys have a lot of support for WVU. We feel fortunate to be able to do it,” he said. “These men are hard-working and they are all about West Virginia and WVU football. We work 24/7 and we have 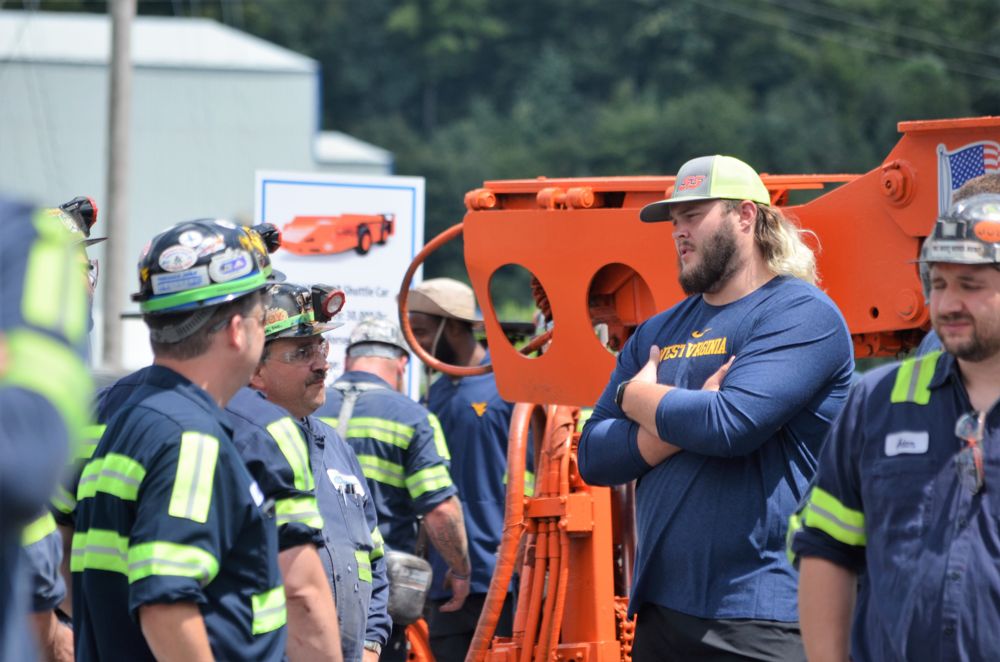 crews underground - and probably some men in the stands - and some in front of the TV, but everyone is cheering on WVU.”
WVU is, in turn, cheering on the miners.
“We talk about the importance of coal in the state of West Virginia,” said Coleman Barnes, associate athletics director for football external affairs. “This is so cool to be able to learn about why it’s so important to West Virginia and beyond.”
The work ethics of the miners and the players are the same, Barnes said.
“We expect greatness out of our guys. The 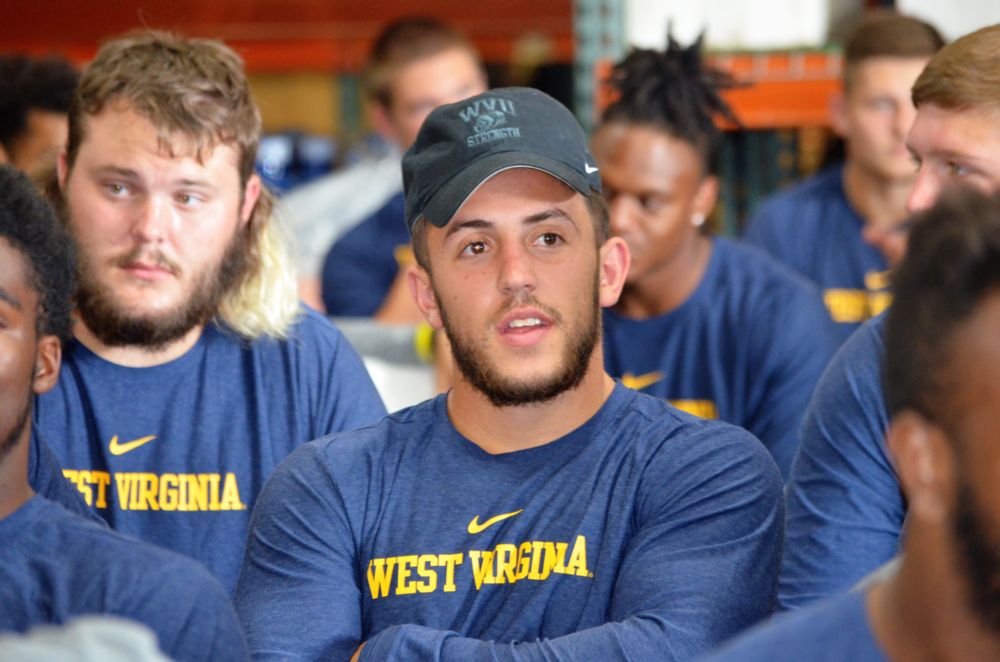 coal miners who go in and work every day expect greatness in their work performance,” he said. “That hard work carries over the same as it does on the football field.”
Fleming – who broke three generations of family tradition when he chose not to make a living in coal mining – said West Virginia’s beloved gridironers and No. 1 industry go hand in hand.
“As Coach Brown believes, you come to work, do your job and let your record stand for itself,” he said. “The coach said this was more important to him than an actual practice. He needs for the team, including all the out-of-state players to realize how hard people work to earn money to buy football tickets and see these guys play.” 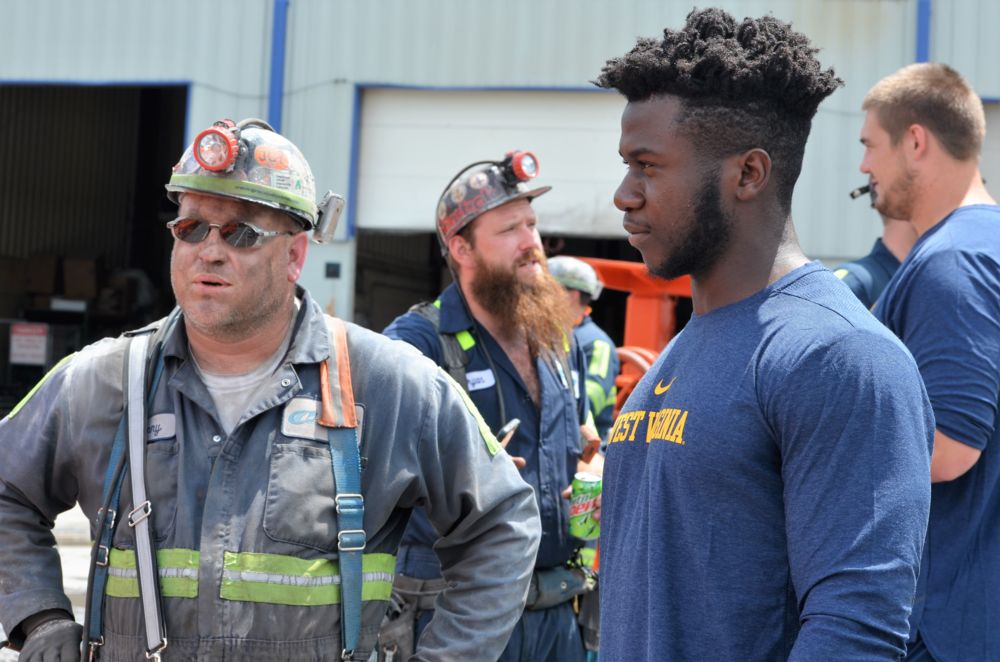 Safety Dante Bonamico of Bridgeport said, as a West Virginian, he takes pride in the coal industry and was enlightened by talking to miners and finding out what they go through daily to provide for their families – and the state.
“The work they put in puts things in perspective,” he said. “We feel really appreciative of what they do.”
From Birmingham, Ala., wide receiver T.J. Simmons said it was indeed pretty cool to come to a place like Leer Mining.
“West Virginia is based on coal mining,” 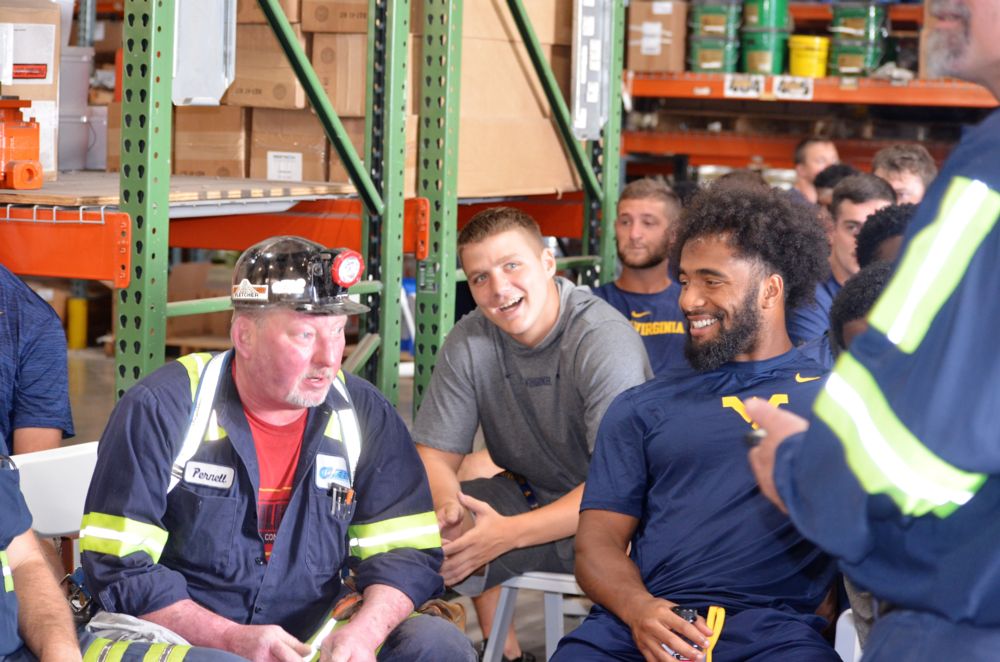 he said. “It is great to see how it works and get to know some of these coal miners and have a great day with them.”
And defensive lineman Nate Green said he will forever “respect the mantrip.”
“This whole experience - and to witness this - is truly an honor,” he said. “And it’s an honor to wear the flying WV.”
The flying WV was predominant throughout the facility Wednesday, providing a warm welcome to the Mountaineers who traveled via charter bus for the field trip. The symbol appeared on everything from the mantrip to hundreds of cupcakes which served as dessert for a country-style buffet, served by smiling Leer employees and volunteers wearing aprons featuring the WVU insignia. A flying WV - crafted of coal by Coal Fillers of Beckley - was presented to each player and 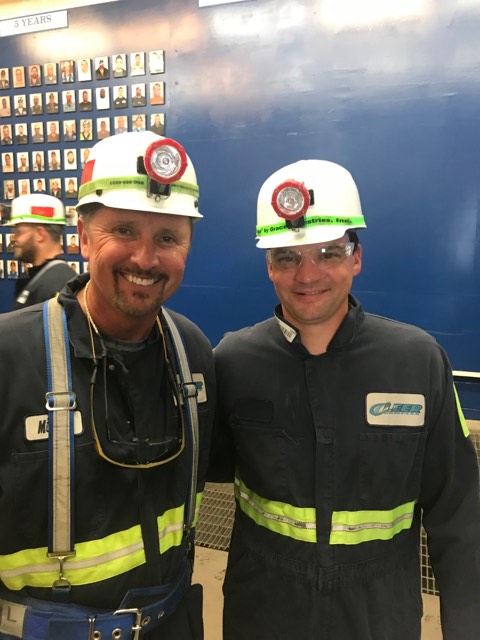 coach before they left the mining facility.
Coach Brown and WVU President Gordon Gee, who was unable to attend, received custom-made hard hats as keepsakes. Brown and Fleming even suited up and went underground.
Editor’s Notes:  Steve Antoline, who – through money acquired through the mining industry - has donated millions of dollars to WVU athletic programs and serves on the board of directors of WVU Medicine Children’s.
Director of NCWV Airport, Rick Rock, was also on hand Wednesday at Leer Mining Complex.
Footage shot Wednesday will be used in an upcoming episode of “Fly Rod Chronicles with Curtis Fleming,” which is aired on Pursuit Channel and Wild TV. See airtimes below.
BHS alum Ross Marra, who is interning at WVU as a videographer, also documented the Mountaineers’ visit to Leer Mining Complex.
SEE MORE PHOTOS AT THE GALLERY LINK BELOW.