Sinkhole Forms on Business Lot in City off Route 50

Although the problem is on private property and the issue may be a result of federal roadway maintained by the state, the City of Bridgeport is aware of the development of a sinkhole not too far from its own headquarters.
On June 17, following a period of heavy rain, a sinkhole opened in one of the entrance and exit areas of the Speedway situated on Main 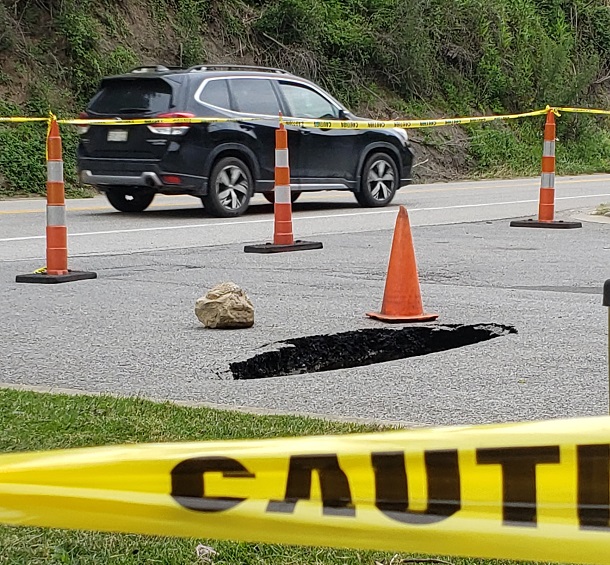 Street. The business can be seen easily from the Bridgeport Municipal Complex property.
“The (business) contacted us, and we advised them to send photos of the sinkhole,” said City Engineer Beth Fox.
Although not required, Fox is planning on visiting the site, and may already have, and send information, along with photos of the site in question to the West Virginia Division of Highways.
“The state should have this,” said Fox. “They’re still working on a preliminary study on Route 50 and are very much aware of drainage problems coming down Route 50 to this area.”
Although the property as noted is not in the city’s jurisdiction and the road leading to the issue is not city owned or even maintained, Fox said the city has mapping of infrastructure under Route 50 and on property throughout the city. Based on mapping, she said there is likely a storm pipe in the location of the sinkhole.
“There’s a chance the pipe failed, a joint separated, or any number of issues,” said Fox. “You can’t say 100 percent, but you feel pretty safe to say that swift water running through the pipe is likely what caused this.”
Speedway is still operating. The area in question has been blocked off with caution tape and cones.
The sinkhole has not stopped any of the gas tanks from being used, but it has closed one of the two points of entry and exit at what is one of the city’s busiest gas stations and stores.