OUTSIDE THE TRIBE: You Can Learn Quite a Bit About Swimming in Just a Few Weeks

By Chris Johnson on February 25, 2020 from Outside the Tribe 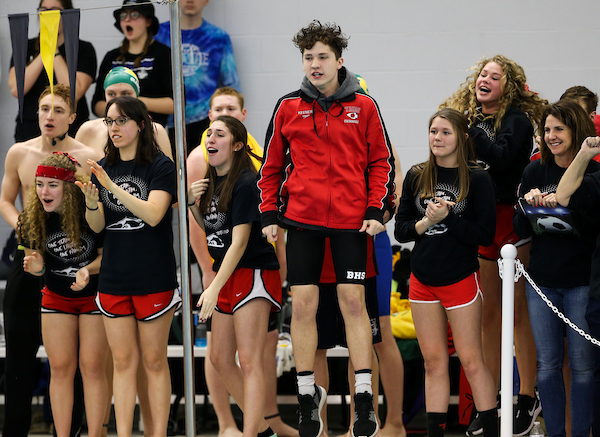 I started covering high school sports in this state in 1997 but until recently, swimming wasn’t one of my focal points.
The number of swim meets I have seen in person now stands at four. And all four have occurred in the past five weeks — the Harrison County, Big 10 Conference and Region III championship meets as well as the two-day state championship meet.
Numerous times, I have seen more baseball or basketball games than four in a single day. In fact, I had a streak of five consecutive years where I was in Charleston for every single game of both the girls and boys state basketball tournaments. If you are keeping track at home that is 21 games over four days in one week, then 21 games over four days the following week.
It’s not that I have ever had anything against swimming. The biggest reason I hadn’t been to a meet in person until recently is that I always had a co-worker that really enjoyed covering the sport and knew a lot more about it than I did.
After four meets, I can see why they always enjoyed it so much. 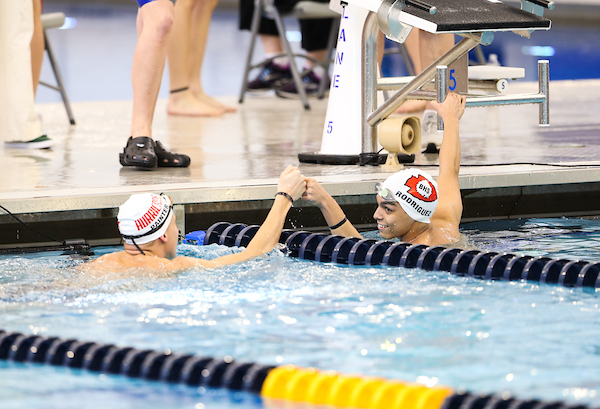 I’ve learned a lot at those four meets too.
Let’s start with the first one, the Harrison County meet which was at Salem University.
Did you know that if it rains all day long and you try to make your way to the T. Edwards Davis Gymnasium, you will encounter more water from the upper parking lot to the front door than if you just walked right into the building and jumped in the pool?
Complete with my soaked shoes (of course you might as well get used to that if you are going to be around the deck area at a meet) I was met with another realization that I had often heard about from co-workers — how hot it can get at an indoor pool with the amount of people that are at a meet.
The temperature change was 50, maybe even 60 degrees, possibly 100, I don’t know.
Seriously, I know it probably isn’t even double digits, but it hits you right in the face with some sort of concoction of steam, teenage adrenaline and chlorine.
The first event of a meet is the 200 yard medley relay. It wasn’t until a few events later, the 50 yard freestyle, that I had a grasp of the distances I was even watching. What I mean is, I just assumed that in the 200 medley relay, each swimmer was swimming 200 yards.
You see, in track, a sport I’m much more familiar with, in the 4x200 relay, each runner runs 200 meters, in the 4x800 they each run 800, etc.
Well, in swimming, 50 yards is one trip to the end of the pool and back. And in the 200 yard medley, each competitor swims for 50 yards, adding up to 200. I had no idea, swimming relays were done this way.
I also didn’t know that a high school swimmer can only compete in two individual events and two relays (or one individual event and all three relays) at a meet. 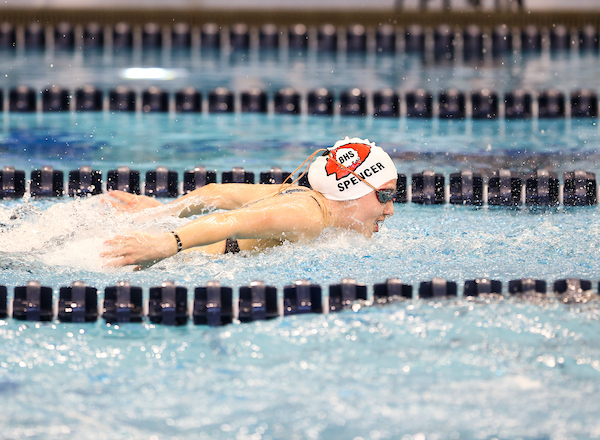 It was also about the time of the 50 free that something else dawned on me.
To me swimming has always been something fun to do in the summertime to cool off. I never really thought too much about it in terms of competition. That’s primarily because there isn’t one of the 11 events that make up a high school meet that I would be any good at. That was confirmed beyond a shadow of a doubt in Salem that night.
Now if there was a 50 free, followed by a nap…I could pull that off. I’m not saying I could win it, but I could finish it.
That got me thinking about what my list of swimming accomplishments would be if somebody had to read them off on senior night. It would go something like this:
“Completed the 50-yard freestyle-map-medley.”
“Once made 17 consecutive shots on the splash and shoot basketball rim.”
“Had a consecutive streak of three times getting into the inflatable lounge chair without tipping over.”
“Can do a handstand under water for a good six to 10 seconds.”
Needless to say, my resume wouldn’t quite stack up with someone like Randy Keener. That same 50 free in Salem was the first time I saw Keener race. He won and set a meet record while doing so. The second time I watched him race, he competed in the 500 freestyle. He won that one too and set another meet record.
I watched this young man compete in the shortest race possible and the longest race possible at a meet and he dominated both. The next meet I was at, he participated in two completely different individual events, yet he won them just as easily, while also setting records.
Keener is worth the price of admission and I’m pretty sure he is faster in the water than a sailfish. He’s so good that it can be easy to overlook how many other standout swimmers there are at Bridgeport High School.
By the time of the regional championship meet, I was starting to get a grasp of just how deep the talent is with the Indians along with things like: 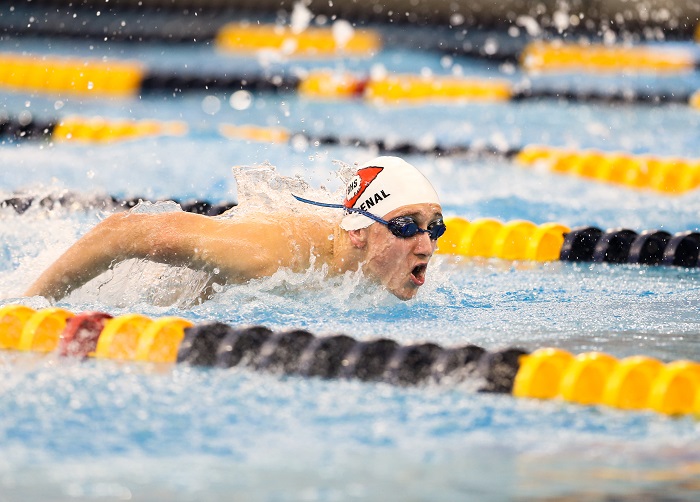 It took just three swim meets for me to learn, BHS has all the right pieces of the puzzle when it comes to assembling teams that are always going to be in the mix for championships, both individual and team wise.
Which brings us to the state meet last week at the new Aquatic Center at Mylan Park.
The BHS girls didn’t quite have the depth to keep up with bigger schools like George Washington, Wheeling Park and Parkersburg yet still finished sixth and placed in every event they had a swimmer in.
The boys’ shot at a repeat state championship was doomed after the opening event, the 200 medley relay, when they were disqualified, costing them 32 points.
And by saying it cost them 32 points, what I mean is Bridgeport would have won that race therefore losing out on the 32 points that come with a first-place finish in a relay that go toward the team standings.
It would have been easy to let that influence the rest of the state meet, but the boys didn’t. They took on the remaining 10 events with purpose rather than bitterness and came within eight points of being back-to-back champs.
True, I’ve seen just four high school swim meets but I’m confident enough to say that you can go ahead and mark down that the Indians aren’t going anywhere soon when it comes to being a force at the state level.
At the Aquatic Center in Morgantown, the pool where the state meet took place in is right beside the pool for the WVU diving team. Above that pool, the tallest diving platform is 33 feet in the air. I’m not sure that distance is accurate though because from my vantage point it had to be at least a mile and a half in the air.
I began taking a poll with the question being, “How much money would somebody have to give you to jump off that platform?”
For the record, me, Joey Signorelli and Greg Talkington all agreed that there is no amount of money.
WVSSAC Assistant Executive Director Wayne Ryan said it would have to be at least a million before he thought about it.
Ryan Decker from WBOY said he would do it for 50 bucks and some free Chick-Fil-A. 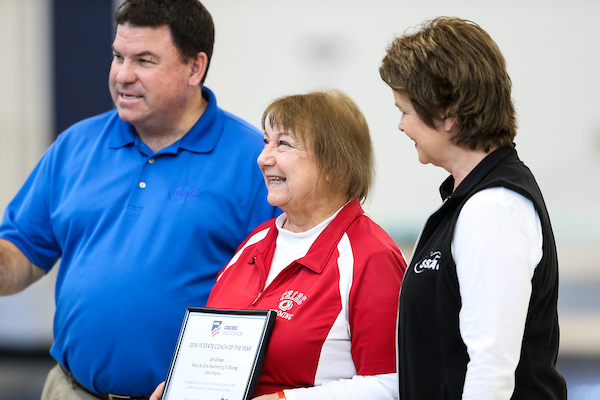 Bridgeport swim coach Jan Grisso gave the most in-depth answer though. She said she didn’t think she could jump off of it. The jump itself wouldn’t be bad because it would be over quick, but the climb up and the walk out onto the platform wouldn’t bode well for someone with a fear of heights.
That’s some pretty good perspective from someone who has spent a lot of time around swimming pools. Perspective is a good word for. She understands the sport, the importance of depth and strong relays and having swimmers that have goals and how much hard work goes in to being successful at this sport and she loves this sport.
After the competition was complete, me and Coach Grisso had a moment as we were watching some of the awards ceremony.
She asked, “So, did you learn anything about high school swimming in the past couple of weeks?”
Faster than Randy Keener coming out of his third turn, I answered, “I learned a lot. The most important thing being, I enjoy being around it.”
Editor's Note: Top photo features Randy Keener and some of his teammates cheering on a competitor in the state meet. Second photo shows Marcel Rodridguez congratulated a Hurricane swimmer. Third photo is of Darian Spencer. Fourth photo is of Mason Titchenal. In the bottom photo, Jan Grisso receives a NFCA Coach of the Year Award during the state swim meet.