According to MetroNews, the ‘Coach TK’ era is underway at Fairmont State. Tim Koenig was introduced earlier this week as the 13th head coach of the FSU men’s basketball program. 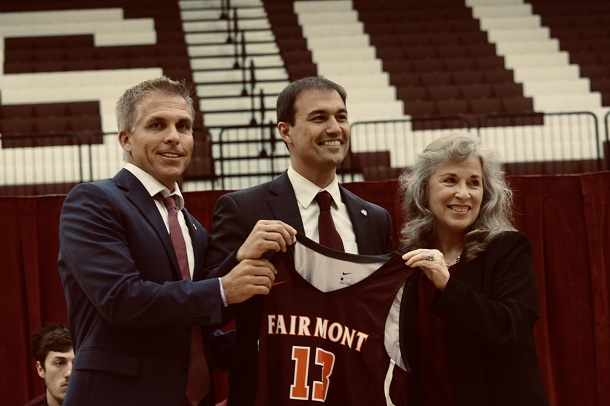 “I know we have inherited a good program, an elite program,” Koenig said. “I have to put my own footprint on that.”
Koenig comes to Fairmont from Mountain East Conference rival Notre Dame College. He led Notre Dame to the MEC Tournament title and an NCAA Tournament berth in March. Koenig was also named the league’s coach of the year in 2019, guiding the Falcons to their first 20-win regular season in school history.
“Once the opportunity was given and was offered, it was a no-brainer. From a family perspective, it is absolutely great. From a career perspective, this is family.”
Koenig replaces Joe Mazzulla, who was recently named an assistant coach with the Boston Celtics.
“I would like to congratulate Joe Mazzulla for an incredible opportunity with the Boston Celtics. I would like to thank him, his wife Camai and his entire family for everything they have done for this athletic department and this community,” said FSU Director of Athletics Chad Fowler.
Click HERE for the rest of the story.
Editor's Note: Photo shows, from left, AD Chad Fowler, Coach Tim Koenig and President Mirta Martin.