After WVU's First Two Football Game of 2019 Season, Some Really Bad News on Offensive Side of Ball

By Connect-Bridgeport Staff on September 10, 2019

FROM METRONEWS
It’s official. Through two games, no team in the country has struggled to run the football more than West Virginia.
The Mountaineers are dead last in the United States at running the football with an average of 1.14 yards per carry. 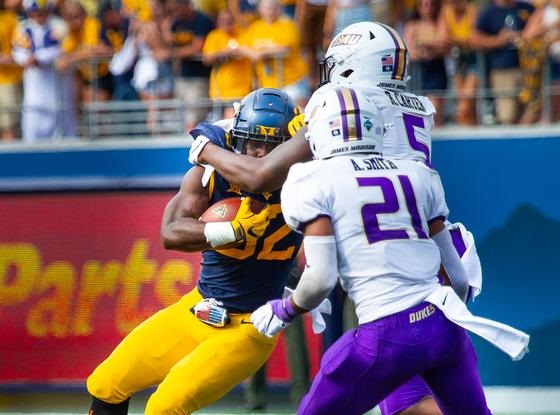 Perhaps no one can put it better than junior offensive lineman Josh Sills.
“Two weeks in a row, we’ve had a piss-poor run game,” Sills said after Saturday’s 38-7 loss to Missouri.
Measured by total yards and yards per game, West Virginia is better than just one team – Texas State, which is coached by former WVU offensive coordinator Jake Spavital. The Bobcats have 58 yards in two games compared to West Virginia’s 64.
The Mountaineers remain the only team in the country that has yet to run for at least one 10-yard gain this season, and that total includes several teams who had a bye in Week 2. The next-worst teams in that department – UCLA, Temple and Liberty – are tied with three apiece.
WVU’s longest two rushes actually came from wide receivers – a 9-yard gain by Tevin Bush on a jet sweep, and an 8-yard gain for Sam James on an end around. Alec Sinkfield has the longest rush for a West Virginia running back – a 6-yarder.
Click HERE for the rest of the report.
Editor's Note: Photo by Ben Queen of www.benqueenphotography.com.