Week 1 of practice for the fall sports season is nearly in the books and Bridgeport High School coaches are pleased with what they have seen so far.
Cross country coach Nathaniel Lutyens said he has 22 total runners, eight boys and 14 girls.
“The first week has gone well,” Lutyens said. 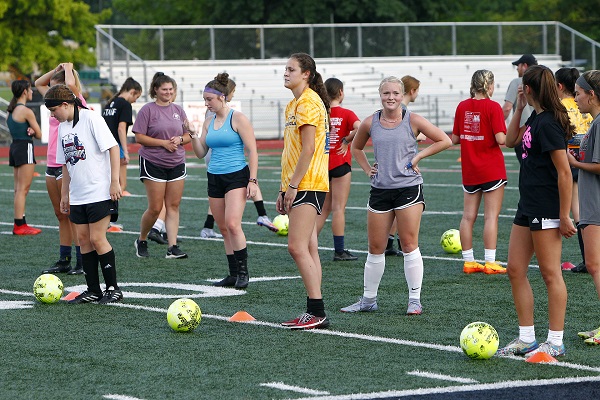 The Indians will have a home meet for the first time since 2019 with the Charles Pointe Invitational on Aug. 27.
The girls soccer team had 28 players out for the first week of practice and Coach Sam McKinney said things have been going OK but they are dealing with some minor injuries.
The first game of the season for the BHS girls is scheduled for Aug. 25 at Morgantown.
For the boys soccer team, 21 players came out Week 1.
“Things are going well,” Coach Keith Dumas said. “We are a young team with only two seniors. I’m very happy with the way things are going.”
The BHS boys will head to the eastern panhandle for scrimmages on Aug. 19 and Aug. 20 against Maritnsburg and Washington, respectively with the season opener scheduled for Aug. 25 at home against Morgantown.
The football team has between 45-50 players out, more on them on Day 1 of practice HERE
The golf team got in two practices before the season began on Wednesday when the Indians won a six-team match at Stonewall on Wednesday. More from the Indians opener and what’s on tap for the Indians in the upcoming days on Connect-Bridgeport.
The BHS volleyball team will begin practice next week.
Editor's Note: Photo of the BHS girls soccer team during practice earlier this week courtesy of Joe LaRocca.