It’s no secret that the COVID pandemic has had an effect on both the preparation and the execution of all high school athletic seasons since March of 2020.
Volleyball, being the only indoor sport for the fall, has been in a unique situation. 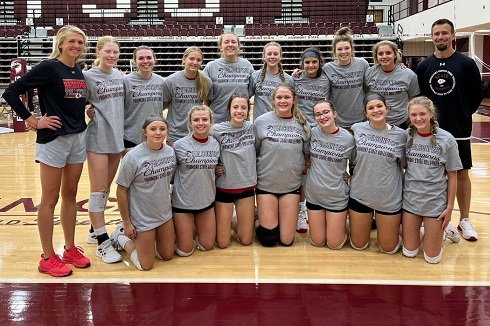 Even during the end of the 2021 season, volleyball players were still being asked to wear masks if not actively competing and spectators also had to wear masks while guidelines for outdoor sports at the time were being lightened.
Finally, this summer, things are starting to resemble pre-pandemic days for volleyball.
“It’s still a little weird though,” Bridgeport High School coach Ali Burton said. “We just shook hands with Ritchie County after our match but the next match we didn’t shake hands. Everyone is still handling it in their own way. But it is starting to look a little normal.”
A big reason for that normalcy is the return of tournaments during the three-week period. Two years ago there were none. Last year they were extremely limited.
“Last year we did not play in any tournaments,” Burton said. “This year we are in three. Some of these girls have never experienced a tournament unless they have played one in travel volleyball.”
Two of the tournaments were last weekend.
The Indians were hosts for a 10-school event at the CityNet Center last Friday that also featured Hedgesville, Parkersburg, Woodrow Wilson, University, Philip Barbour, Robert C. Byrd, Ritchie County, Tyler Consolidated and Liberty. BHS and Parkersburg each fielded a “B” team as well.
The BHS “A” team went 5-1, while the “B” team went 2-4.
On Saturday, the Indians took part in a tournament at Fairmont State. They beat Gilmer County, Moorefield, Ravenswood and River View in pool play, beat Williamstown in the bracket semifinals and then defeated Oak Glen in the championship round.
Alexa Martin and Ella Sorine were both named to the all-tournament team in Fairmont.
The event at the CityNet Center was a new experience as BHS has never been able to have a tournament that size at home due to only being able to use one court at the high school.
“Here (the CityNet Center) now have the ability to run two courts,” Burton said. “It’s nice to be up here and for them to allow us to run a tournament like this. We’ve had a good turnout of girls in practice and they were ready and they wanted to play in a tournament.
“We got to run a second team and with the younger ones we were able to see some things that are going to help get them on the court. It was a great opportunity to step up.”
The Indians still have a tournament at Philip Barbour on tap for the three-week period.
Editor's Note: Submitted photo shows the BHS volleyball team after winning the tournament in Fairmont last Saturday.