For the first time this season, the five-time Class AA defending state champion Bridgeport baseball team found out what it was like to be on the wrong end of a scoreboard. In fact, the Indians dropped two games this weekend in the annual McDonald’s Classic.
The Tribe lost to Class AAA Morgantown Friday and then dropped a decision to Erie McDowell out of Pennsylvania on Saturday.  Both games were played at the Indians baseball complex. 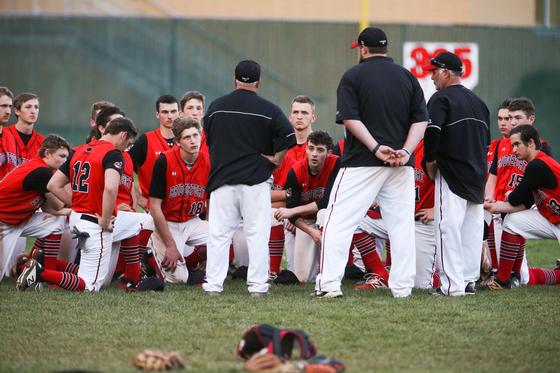 The setbacks left the Indians at 10-2 on the year. The losses also created the first bit of doubt among statewide radio broadcasters and sports writers across the state as to who the top team in ‘AA’ this year.
On Monday, the fourth edition of the MetroNews Baseball Power Rankings were released. The Tribe remained the top team in Class AA, but for the first time this season they weren’t a unanimous choice.
BHS, 10-2 heading into Monday, earned nine of the 10 first place votes amongst the panelists. The other first place vote went to Frankfort. The Falcons, who are 12-2, are ranked No. 2 in the poll.
This week also marked the first time the Class AA standings top 10 featured three Big 10 teams. Along with the Indians, Elkins checked in at No. 7 (12-5), while East Fairmont comes in at No. 9 (10-4). Two more Big 10 teams – Philip Barbour and Fairmont Senior – are in the receiving votes potion of the poll.
In Class A, Notre Dame is ranked No. 6 with an 11-6 record. In Class AA, Morgantown is No. 3 at 16-2.
Click HERE for the top 10 in all three classifications.
Editor's Note: Photo by www.benqueenphotography.com.