From the Bench: BHS Alum Bonamico's Last Ride at WVU Proves Special as He Goes Out as a Winner

It was back in 2016 when Dante Bonamico entered West Virginia University. He was a preferred walk-on player invited by then Coach Dana Holgorsen.
The 5’8 Bridgeport High School graduate heard the noise. He continued to hear while he was at WVU. He continued to prove people wrong. 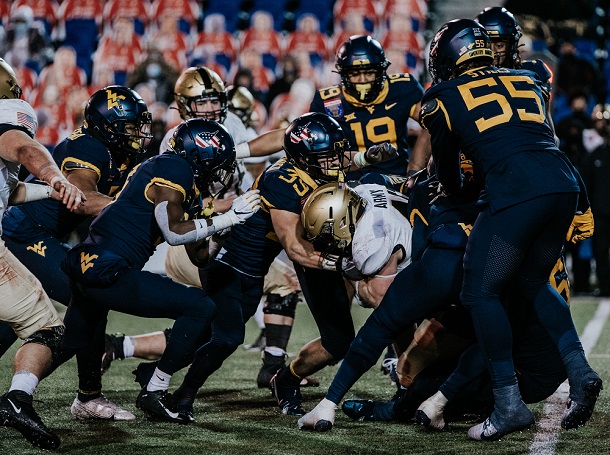 “I knew there was going to be doubt; heck there was maybe some doubt in the back of my mind,” said Bonamico. “Once I got my feet wet, I knew I could play. The other thing I knew was that no one’s opinion mattered other than mine and that of the coaches. I just went out and worked and hoped it would pay off.”
It did pay off. It paid off in earning scholarships. It paid off in a degree. It paid off in playing on West Virginia’s biggest football stage.
In the end, it paid off in the final game of his career. Between 2017 and 2020, Bonamico’s specialty was special teams. Although he did see action in the defensive secondary, it was on special teams where he made his mark.
Then, in what would prove to be his final game in Mountaineer colors, Coach Neal Brown turned to Bonamico in the second half of the Liberty Bowl and Bonamico delivered. Heading into the game, Bonamico’s season total listed six tackles. By game’s end, he was third on the team with 10 – just one behind teammate and fellow BHS alum Dylan Tonkery who had 11. 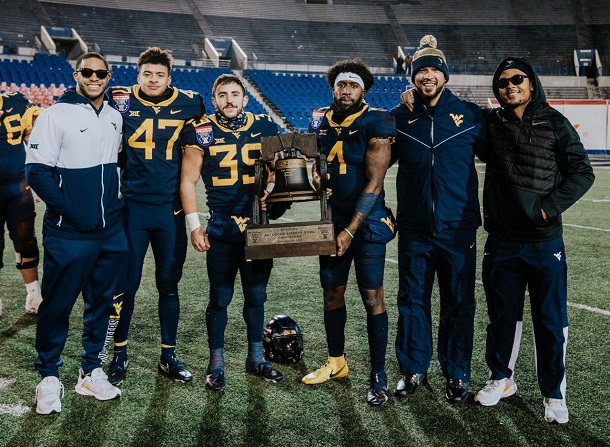 “It was a testament to staying ready in case I would be called. I always knew that was the case because I was second or third string safety before,” said Bonamico. “To have my number called after a good week of practice and what was my final game made it that much more worthwhile. It showed I stuck with it, practiced hard, paid attention in the film room, and got my chance. It just happened to be the last chance.”
The fact was not lost on Coach Neal Brown. Brown singled out Bonamico as one of the unsung heroes in the 24-21 Liberty Bowl win over Army in the postgame press conference.
“We lost three secondary members to head injuries and we’re not very deep in the secondary as well,” Brown said. “Bonamico hadn’t 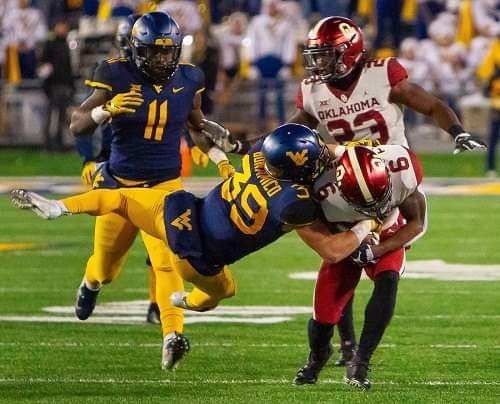 played a snap of safety in two years and he played half the third and the whole fourth quarter. We kind of pieced it together.”
Bonamico, as he was throughout a high school career that saw three state titles in football (three more in baseball), was the glue that held it together.
“Going out like that meant everything. There was no better way to go out, especially with Dylan getting 11 tackles and me 10,” said Bonamico. “It felt like I was back in high school.”
Bonamico has played big snaps before. It just had been a while, and it had just had not been so many consecutive. He played key snaps in previous games against Baylor and Oklahoma.
“I’ve been in pressure games before, but that was the most snaps I’ve played in crunch minutes,” said Bonamico. “It was as big as a moment as I’ve been involved with here.”
The biggest? That would go back to Nov. 13, 2018. A top 20 showdown between WVU and Texas in Austin, Texas.
For those that do not remember, WVU’s Will Grier ran in a two-point conversion with 16 seconds left to give the Mountaineers a 42-41 win. The late score put the Longhorns in a late panic situation and then Coach Dana Holgorsen put Bonamico into the game. 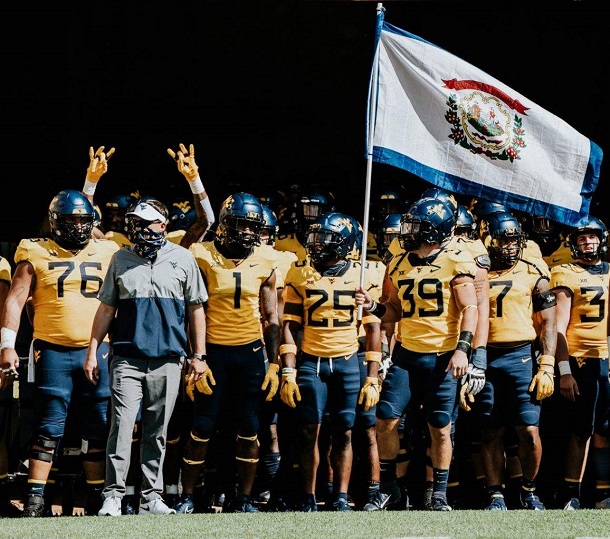 “That Texas game in 2018 was the biggest game I was involved in during my time because of the ups and down and Will scoring late,” said Bonamico. “We have a ‘Hail Mary’ defensive package for the last play of the game, and they put me in there.”
As expected, Texas began lateraling the football looking for a miracle. Instead, the football found the arms of Bonamico who pounced on the pigskin and snuffed out the hopes of the Longhorns.
“That was pretty special,” he said.
The possibility of adding special moments did not end after the Army game. Due to COVID-19, the NCAA has granted any senior an extra year of eligibility. Bonamico decided it was time to move on.
“It was pretty easy for me to make the decision after some thought and discussion,” Bonamico said. “I’ve given everything I had to the 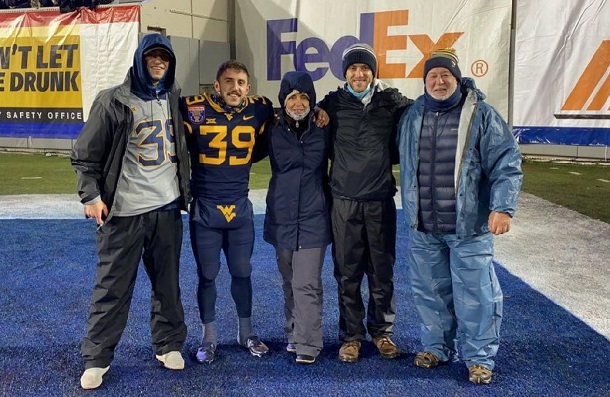 program and poured what I had into it. I talked it over with Coach Brown and we talked pros and cons, and I’m happy with where I was at when we talked. I came to terms with it and it’s time to move on.”
For the first time since he was playing youth football, Bonamico will not be training for an upcoming season. Instead, he is getting ready for his next assignment that, perhaps not so ironically, will include football.
“I graduated in the summer with a sports management degree and plan on coaching well into the future,” he said. “That’s what I would like to do. I’d also like to go to graduate school and get my master’s degree, but right now I want to get my foot in the door.”
Once inside that door, he hopes to give back to a sport that gave him plenty. 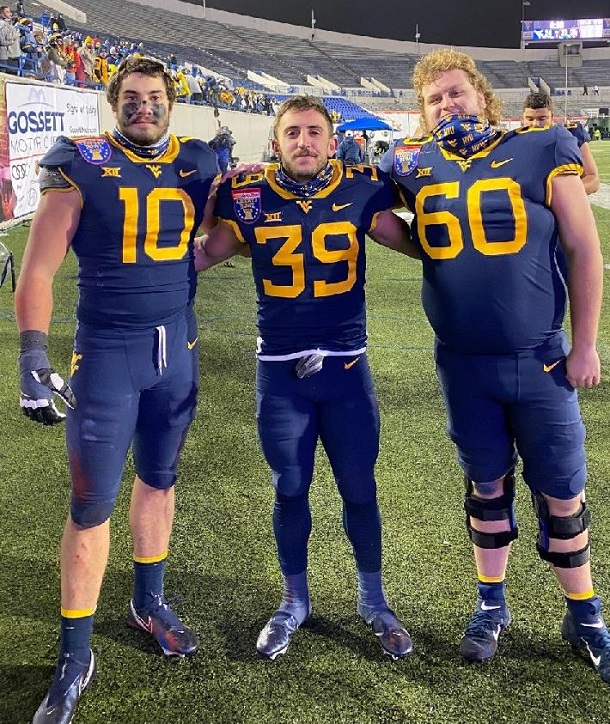 “I have obviously learned a lot of football schemes, coaching styles, and organization. There is so much that goes into it that maybe the common football fan thinks they know, but they don’t,” said Bonamico. “I want to return the favor the sport has given me, and it has given me a lot.
As one might expect, the connections made are likely going to be for a lifetime.
“The biggest thing I got from this is the friendships. These are guys that are going to be at my wedding,” said Bonamico. “I just got off of a group chat with guys from Missouri, Chicago, and New Jersey. That’s the real value. I’ve got new family now.”
He said the growth of that football family was fostered by the arrival of Brown.
“Getting to play for Coach Brown was awesome. He created the family environment I had not felt here; the same type of atmosphere I grew up with,” said Bonamico. “I also want to thank (Coach) Dana (Holgorsen) for bringing me here and giving me the chance to participate when a lot of other coaches may not have.”
A chance is all Dante Bonamico has ever needed. Anyone who has given it to him, including the WVU football program, has been better off for it.
Editor’s Note: Top two photos from the Liberty Bowl courtesy of  WVU Sports Communications, while third photo Dante Bonamico making a tackle against Oklahoma in 2018 by Ben Queen of Ben Queen Photography. Next three photos - with family, carrying WVU flag out pre-game, and with BHS teammates Dylan Tonkery, left, and Noah Drummond after the Liberty Bowl - courtesy of Dante Bonamico. Efforts will be made to talk with Dylan Tonkery in the weeks ahead for a blog.