Gunnar Webb is not unusual when it comes to being a diehard West Virginia University sports fan. He does, however, have a rather good run going when it comes to the University’s most followed sport.
“Since I was eight years old, I can count on one hand the number of WVU football games I’ve missed,” said Webb, a 2019 Bridgeport High School graduate.
Actually, he only would need two fingers He missed one game he cannot remember who the Mountaineers played when he was younger due to a family vacation, and he missed a second one – the 2016 home opener against Missouri – due to appendicitis. 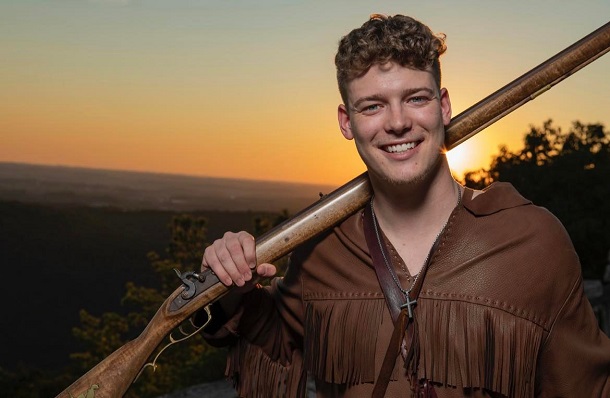 Barring something unusual, that streak will continue this year. This time, however, it is for more than just being a diehard. Webb will be watching closely and loudly as he always does, but this time he will be monitoring how Mountaineer Mascot Mary Roush does things.
The reason for that is simple. Webb, 21, is the alternate WVU Mountaineer for 2022-23 and has hopes on being the lead mascot for WVU in 2023-24.
“That’s what I’ve wanted for as long as I can remember, and it really got cemented in high school,” said Webb.
Webb ran track for two years and played freshman hoops before the need to start working in his junior year curtailed things. That, however, did not stop him from being heavily involved on the sports front. Webb worked in the journalism department doing sports report 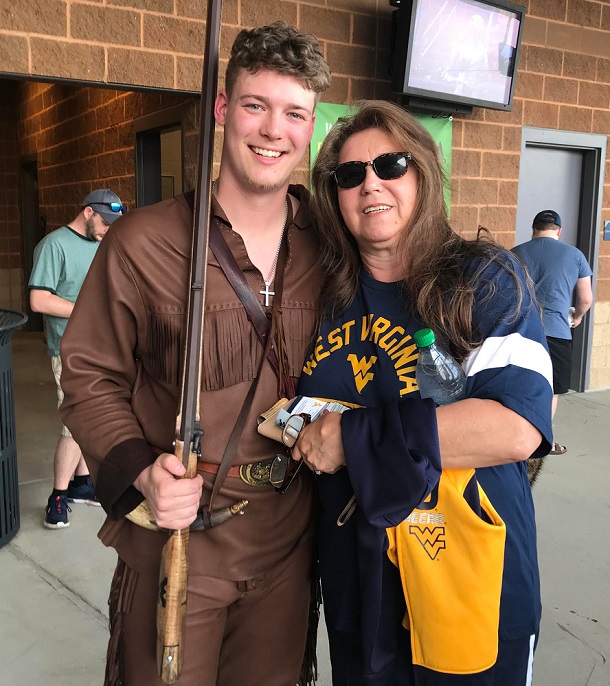 videos, including game-day football previews, as well as being front and center and most heavily attended Indian sporting events.
Ironically, it was a moment away from the school confines that cemented Webb’s desire to try out to be the mascot in Morgantown.
“I always wanted to be the mascot, particularly in high school, but it was in 2018, my junior year, when I was at (Mountaineer) Boy’s State when it got really serious,” said Webb.
The reason for that was the junior counselor dealing with Webb at Boy’s State was Trevor Kiess. While the name may not ring a bell, he just happened to be the WVU Mountaineer at the time.
“I actually rode the bus with him to Charleston because everyone who was a member of the House, Senate or executive branch went to Charleston to tour the House chambers,” said Webb. “Riding down with him and back I got a good idea of what the Mountaineer does and, today, he’s what I envision when I envision the Mountaineer.”
The alternate Mountaineer’s role is a bit different from what Kiess did and what the current Mountaineer does. Primarily, you are in a situation to fill in at events where the Mountaineer cannot be or to help ease the load. The primary appearances are all managed by the regular Mountaineer.
“So far, I’ve done a baseball game against Kansas State and five or more new student orientation events along with the WVU Medicine employee picnic and got to speak to a health care group as well,” said Webb. “I did the most recent ones because Mary (Roush, the regular Mountaineer) was at the Best Virginia TBT Tournament.” 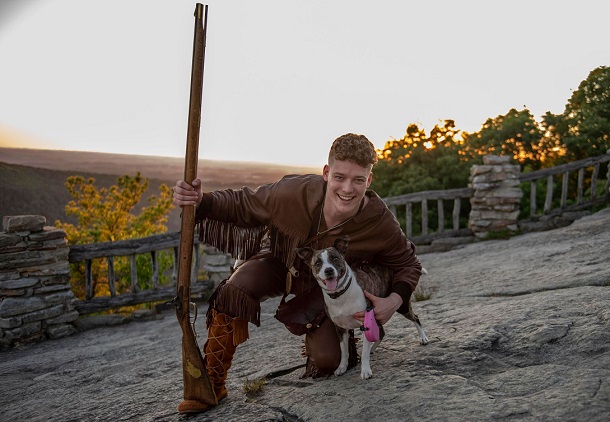 The political science major with a minor in economics and philosophy is enjoying what he has done so far. In fact, he is enjoying it so much that he will definitely be trying out again. If he gets it, he will enter into graduate classes and postpone plans for law school.
“I want it really bad, and not just because what you see on the athletic side,” said Webb. “You visit schools, festivals, parades and so many events throughout the state where you are a spokesperson for the University and, in a sense, the state.
“To be able to represent West Virginia on a stage and substantial platform as the Mountaineer is not just a great experience, but the opportunity of a lifetime,” he continued. “You have to take this seriously because if you are from this state, you know people take pride, very serious pride, in West Virginia and their state university.”
Webb is one of those people who takes pride in the state. He definitely takes pride in his current role, even if it is just short of what he had hoped for back when the official announcement was made on March 5 when WVU hosted Texas Christian University.
The announcement of who would be the next Mountaineer came after a Feb. 26 home game against Texas. Webb and the other four finalists participated in a cheer off where, instead of being on the court or firing up the student section, the group had one half of action to make it all the way around the Coliseum
“You’re wearing oversize buckskins not made to your size and it’s 75-degrees or more in the Coliseum. You’re trying to hit all the sections, 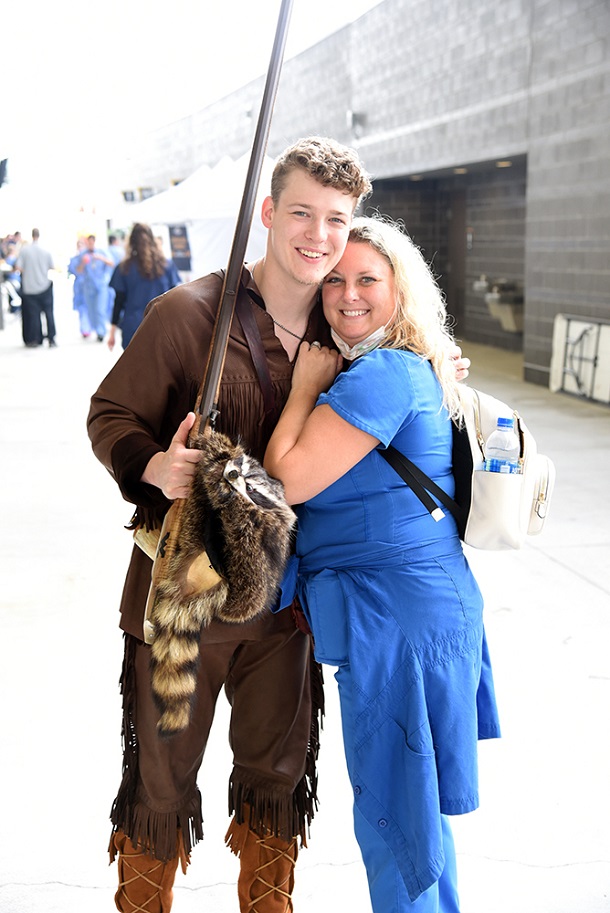 walking up and down, and at the same time managing the time you have,” he said. “At the same time, I’m thinking how amazing it was to be in the buckskins in the Coliseum because I had thought about that for a long time.”
With the audition over, the announcement came against TCU – and Roush was named. Although dismayed not to get the honor, Webb knew there was a chance to be the alternate. And the waiting game was on.
“After the announcement, they don’t publicly announce the alternate. It comes 10 minutes later and during that whole time I’m not entirely sure what was going on,” said Webb. “I got called up to the concourse area of the Coliseum from the student section and was asked if I would be interested in taking the position of alternate and my answer was an immediate ‘yes.’ There was no hesitation.”
The dream, at least a portion of it, has been realized. He is now wearing a properly fitting buckskin outfit and coonskin cap. And for those who believe the outfit is less than comfortable, you would be correct.
“You can take the temperature outside and add about 15 -20 degrees to it. The coonskin cap, something I really never thought about, is what generates the heat,” said Webb. “It engulfs the top of your head and the heat because of it is intense. You recognize it, but I’m so happy to be wearing it that it doesn’t bother me.”
This fall, Webb will be sporting the gear at a few events already scheduled. He will be at a few soccer matches, volleyball and he said he will be doing women’s basketball at times as well. There is a chance to do a men’s basketball game if it conflicts with a football game.
There is one other thing he said he said is big for the Mountaineer. In fact, he said it is one of the things he hopes he is needed for this year and, if lucky enough to earn the full-time gig next year, do as often as needed.
“Going to WVU Medicine Children’s is one of the most fantastic experiences that comes with being the Mountaineer. You get to brighten the day of children and their families who are having a rough go of it,” said Webb. “That is the Mountaineer’s job, but if Mary has another commitment, it is something I’ll definitely look forward to.”
Of course, one other event he will be looking forward to is the early 2023 tryout to be the full-time Mountaineer for the following school calendar year. And he knows it is a bit easier than it was in the past.
“In the past, you could be the Mountaineer for two to three years and they would get so good at it by settling into the position. Now, you can only be the Mountaineer for one year so I can reapply knowing that a veteran isn’t wanting to do it again,” said Webb. “I still have to earn it.”
In the interim, the son of William “Bill” Webb of Bridgeport and Melissa Gotses of Fairmont – and brother to Bridgeport Middle School eighth grader Gage Webb – Gunnar will be looking to do whatever is called on him. And the Mountaineer is called on a lot.
In fact, groups here in Bridgeport have requested appearances in the past and can do so now. Whether you can request Webb, who is starting his senior year at WVU, for a local appearance is left up the head of the program Sonja Wilson. To officially apply, click HERE.
Editor's Note: Top photo is the official portrait of Gunnar Webb as the Mountaineer alternate. The next three photos show him posing with various individuals, which is a big requirement of the position. In this case, he knows all three. In the second photo, he is shown with his grandmother Crystal Webb from Grafton, while he is shown with his dog Daisy in the second picture. Bottom photo shows Gunnar with his mom Melissa Gotses at a WVU event both participated in (bottom photo courtesy of Dan Shrensky).