From the Bench: Big Change on Way to Bridgeport and High School Football Programs Across State

By Jeff Toquinto on February 24, 2019 from Sports Blog

College and professional football is coming to Bridgeport High School and every other high school football program in West Virginia. Actually, one of their rules is on the way to prep football in the Mountain State.
The National Federal of High Schools has announced rule changes that will go into place for the 2019 football season that’s still months away. The one that most will notice involves eliminating the 25-second play clock and going with an automatic 40-second play clock once a play is over. 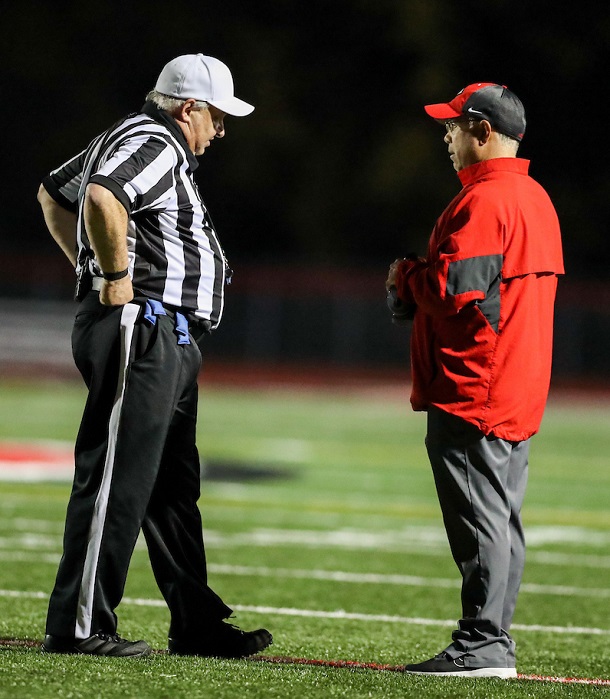 Is this good news or bad news? For teams who don’t spend a ton of time trying to come up with the perfect play on every snap and for those who don’t like three hour ball games, it should be good news. At least that’s what a couple of people involved are saying
“I honestly don’t think it’s going to have a huge impact on us,” said Bridgeport Coach John Cole. “We’re pretty good with the play clock now and I imagine if there’s any adjustments we’ll figure that out during practice and scrimmages in August. Right now, I don’t think it’s going to hurt us.”
More from Coach Cole shortly. Here’s what David Marra, a referee and one of the rules interpreter for the Mason Dixon Conference had to say about it.
“I’ve dealt with the 40-second clock from my experience officiating college games. We’ve been waiting and hoping for this to come to the high school level for years,” said Marra.
The reason?
“It helps with the flow of the game and will speed up the game immensely,” said Marra. “People may think it won’t, but it will.”
For someone who is generally the next to the last person out of Wayne Jamison Field prior to the custodial staff, count me in as a supporter of anything that speeds up the game. That said, Marra was kind enough to break it down.
“When the runner is down at the end of the play, the referee will raise their arm to indicate the start of the 40-second clock. From that point, the clock operator will know exactly what to count before hitting the reset button,” said Marra. “The ready for play whistle by the 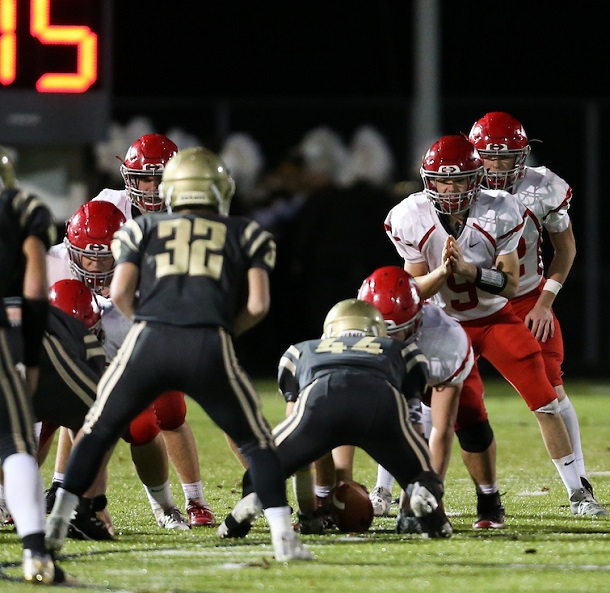 referee will no longer be used.”
The clock operator, said Marra, will likely count “one one-thousand” or “two one-thousand” before hitting the button. That hasn’t been spelled out as of yet, but will be in short order.
Three ways the clock starts at 40 seconds. With a normal play that ends in bounds, the official will raise their hands. With an incomplete pass, the official will be waving their arms to start and, thirdly, when a players goes out of bounds the scissors signal above their head will signal to signal the start of the 40-second clock.
There are still exceptions for penalties or an administrative stoppage such as fixing someone’s helmet. The clock then is set at 25 seconds and the referee will signal the start of the play. Marra said how the clock will work with an injury has yet to be determined as in college the times for starting the clock after an injury  differs whether it’s an offensive or defensive player.
“With this, you’re not going to have to worry about the difference in referees and crews. Some are slower than others when getting thigs in the ready to play mode to start the 25-second clock,” said Marra. “Sometimes it’s eight or seconds difference. With this, it’s the same and, trust me, it’s going to speed things up.”
If Marra says so, I’ll take his word for it. Along with doing it at the college level, Marra has been officiating for 34 years so he knows his way around the high school football clock.
Cole also has been around a while. He may just be in his third season as head coach, but his actual coaching periods goes back decades 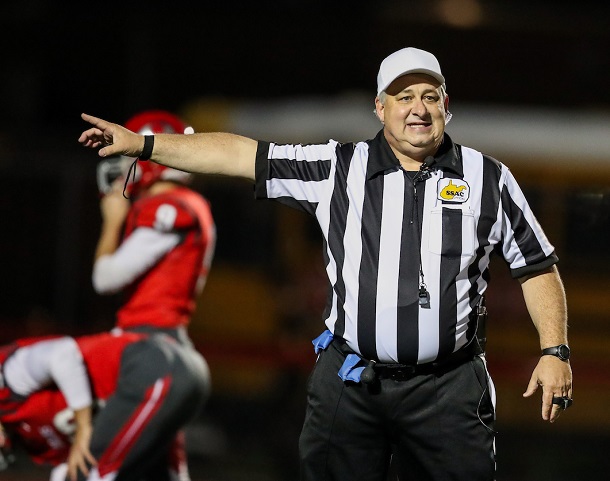 to the final year of the Wayne Jamison era. As for the impact, he said it has the potential to benefit some teams.
“I think the benefit will be to teams that don’t huddle as much. We huddle, but it won’t be a bad thing for us,” said Cole. “For teams not huddling like Keyser has done a lot in the past, they can look over the defense longer and maybe get a grasp.
“For us, it will be up to (Assistant) Coach (and offensive coordinator Tyler) Phares to signal plays in or run them in during the allotted time,” Cole continued. “We’re comfortable with him adjusting and we’ve always had a system to get in plays fairly quickly.”
It’s hard to argue that point. Bridgeport rarely burns timeouts to avoid a delay of game penalty.
“I do know with the power pistol it seems like the clock gets closer to zero a bit faster so that’s, of course, concerning me,” said Cole. “With the 25-second clock and now with the 40-second clock there’s not going to be a good reason to use a timeout or get a penalty because of not being able to get a play off. That clocks up there for a reason and the coaches and players can see it.”
A lot of the responsibility for getting the play off in time falls on the quarterback. Cole will have a bit of a luxury with returning starter Devin Vandergrift, who also got starts as a sophomore.
“It’s up to Devin to make sure everyone is ready and I don’t think that’s going to be an issue with him,” said Cole. “We’ll start simulating it some in our three-week practice period in June and then hope all is well when August comes around.”
When next August comes around, there may be something else to deal with – at least Marra thinks it’s possible.
“I’m pretty sure the next change you’ll see is the referee holding up plays when the offense has made a substitution … You won’t be able to snap until the referee gives the signal for it and the substitutes have come into the game. That’s coming soon.”
Editor's Note: Top photo shows referee David Marra talking with BHS Coach John Cole. In the second photo, the play clock has plenty of time left on it as Devin Vandergrift barks out commands in a game last year. In the bottom photo, Marra is shown making a call in the BHS-Lincoln game in 2017. Photos by www.benqueenphotography.com.